What will happen in the 2020s? If history is any guide (and there’s good reason to think it is), the outlook isn’t great.

Thanks to globalisation, all this won’t just happen in one country but in the majority of countries in the world. We will also see geopolitical realignment, dividing the world into new alliances and blocs.

There is also a low to moderate chance of a “trigger event” – a shock like an environmental crisis, plague, or economic meltdown – that will kick off a period of extreme violence. And there is a much lower chance we will see a technological breakthrough on par with the industrial revolution that can ease the pressure in the 2020s and reverse the trends above.

These aren’t just guesses. They are predictions made with the tools of cliodynamics, which uses dozens of case studies of civilisations over the past 5,000 years to look for mathematical patterns in human history.

Read more: Cliodynamics: can science decode the laws of history?

Cycles of growth and decline

One area where cliodynamics has borne fruit is “demographic-structural theory”, which explains common cycles of prosperity and decline.

Here’s an example of a full cycle, taken from Roman history. After the second Punic war in 201 BCE, the Roman republic enjoyed a period of extreme growth and prosperity. There was a relatively small divide between the richest and poorest, and fewer members of elites.

As the population grew, smallholders had to sell off their farms. Land coalesced into larger plantations run by elites mostly with slave labour. Elite numbers ballooned, wealth inequality became extreme, the common people felt pinched, and numerous wealthy people found themselves shut out of power. 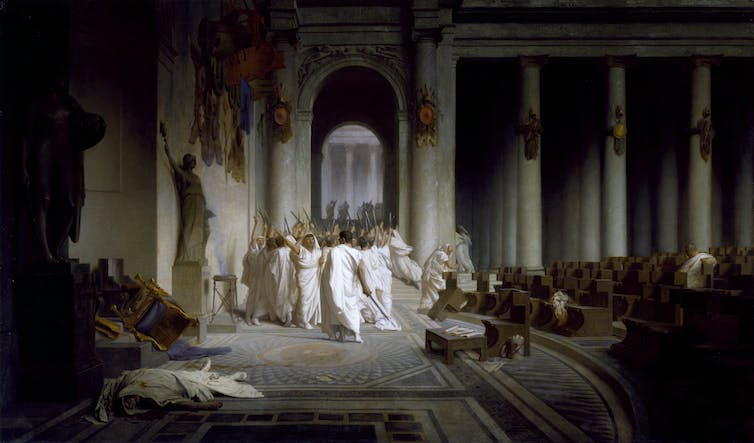 The assassination of Julius Caesar was a key event in the decline of the Roman republic. Jean-Leon Gerome

The rich resisted calls for land reform, and eventually the elites split into two factions called the Optimates and the Populares. The following century involved slave revolts and two massive civil wars.

Stability only returned when Augustus defeated all other rivals in 30 BCE – and ended the republic, making himself emperor. So began a new cycle of growth.

Demographic-structural theory looks at things like the economic and political strength of the state, the ages and wages of the population, and the size and wealth of the elite to diagnose a society’s health – and work out where it’s heading.

Historically, some things we see today are bad signs: shrinking real wages, a growing gap between the richest and the poorest, rising numbers of wealthy and influential people who are becoming more competitive and factionalised.

Another bad sign is if previous generations witnessed periods of growth and plenty. It might mean that your society is about to hit a wall – unless a great deal of innovation and good policy relieves the pressure once again. 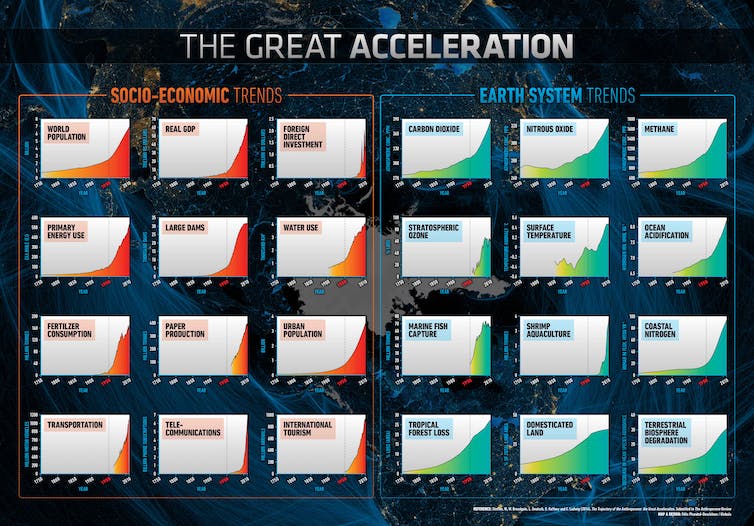 We are living in an unprecedented period of global growth. History says it won’t last. SRC / IGBP / F Pharand Deschenes

The modern global system has experienced a period of growth unprecedented in human history since 1945, often referred to as the “Great Acceleration”. Yet in country after country today, we see stagnant wages, rising inequality, and wealthy elites jousting for control.

Historically, periods of strain and “elite overpopulation” are followed by a crisis (environmental or economic), which is in turn followed by years of sociopolitical instability and violence.

Factional warring after a disaster in a top-heavy society makes things much worse. It can keep the population low for decades after the initial catastrophe, and may only end when elites are exhausted or killed off.

This underlying cycle fed the Wars of the Roses between the Lancastrians and Yorkists in 15th century England, the struggle between the Optimates and Populares in the Roman Republic, and countless other conflicts in history.

In a period of growth and expansion these dynastic, political, and religious animosities would be less pronounced – as there is more of everything to go around – but in a period of decline they become incendiary.

In different regions and time periods, the factions vary widely, but the ideological merits or faults of any particular faction have literally no bearing on the pattern.

We always massacre each other on the downward side of a cycle. Remember that fact as we embark on the pattern again in the 2020s, and you find yourself becoming blindingly angry while watching the news or reading what someone said on Twitter.

Because the world’s societies and economies are more unified than ever before, the increasing political division we see in Australia or the United States also manifests itself around the world.

Violence between the Bharatiya Janata Party (BJP) and Trinamool Congress in Bengal, political polarisation in Brazil following the election of Jair Bolsonaro, and less public conflicts within China’s ruling party are all part of a global trend. 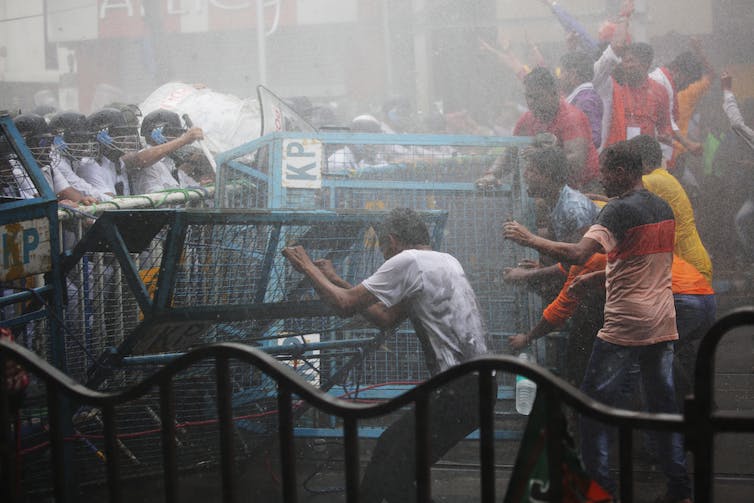 Clashes between supporters of the BJP and Trinamool Congress parties in Kolkata are a symptom of a worldwide trend. Piyal Adhikary / EPA

We can expect this decline to continue steadily in the next decade, unless a trigger event kicks off a crisis and a long period – perhaps decades – of extreme violence.

Here’s a dramatic historical example: in the 12th century, Europe’s population was growing and living standards were rising. The late 13th century ushered in a period of strain. Then the Great Famine of 1315–17 set off a time of strife and increasing violence. Next came an even bigger disaster, the Black Death of 1347–51.

After these two trigger events, elites fighting over the wreckage led to a century of slaughter across Europe.

From my own studies, these “depression phases” kill an average of 20% of the population. On a global scale, today, that would mean 1.6 to 1.7 billion people dead.

There is, of course, only a low to moderate probability that such a trigger event will occur in the 2020s. It may happen decades later. But the kindling for such a conflagration is already being laid.

Technology to the rescue?

One thing that could reverse this cycle would be a major technological breakthrough. Innovation has temporarily warded off decline in the past.

In mid-11th century Europe, for example, new land-clearing and agricultural methods allowed a dramatic increase in production which led to relative prosperity and stability in the 12th century. Or in the mid-17th century, high-yield crops from the Americas raised carrying capacities in some parts of China.

In our current situation, something like nuclear fusion – which could provide abundant, cheap, clean energy – might change the situation drastically.

The probability of this occurring in the 2020s is low. Nevertheless, innovation remains our best hope, and the sooner it happens the better.

This could be a guiding policy for public and private investment in the 2020s. It is a time for generous funding, monumental projects, and bold ventures to lift humanity out of a potential abyss.

Sunlit uplands of the distant future 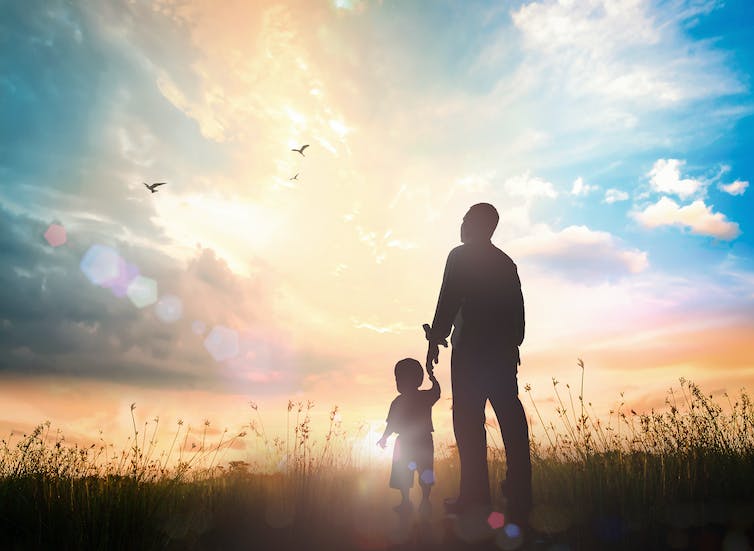 If you look far enough ahead, our prospects become brighter. Shutterstock

Cheer up. All is not lost. The further we project into the future the brighter human prospects become again, as great advances in technology do occur on a long enough timescale.

Given the acceleration of the frequency of such advances over the past 5,000 years of history, we can expect something profound on the scale of the invention of agriculture or the advent of heavy industry to occur within the next 100 years.