Unlike other screen versions, the story of this Ned Kelly is not hagiographic, or romantic. He does not die a social martyr, in a battle of good against bad. He does not end a figure worthy of sorrow and mourning.

Earlier Kelly films were sympathetic to the character: hero worshiping Ned as the great egalitarian hero of the Australian bush. Kurzel’s film, based on the novel by Peter Carey, reads like a response to this framing.

As with The Snowtown Murders (2011), Kurzel considers how historical criminals are sentimentalised in a way contemporary murderers are not. In his latest film, he crafts a terrifying dystopia, forcing this same lens we place on the Snowtown killers onto Ned Kelly.

On an infertile, amoral Australian wasteland, Ned (played with vigour and vulnerability by both Orlando Schwerdt as a boy and George MacKay as an adult) speaks in a tough, ocker accent – not the customary Irish brogue.

He is not hirsute. No bushranger beard, nor facial hair whatsoever. He is not political. His stance against authority does not come from a wider benevolence to right the wrongs of authority. He is not a Robin Hood social bandit, robbing the rich to feed the poor.

Any romantic or gentlemanly tendencies are given little oxygen.

Ned is a damaged and unhinged violent, colonial, punk anarchist, with an anti-authoritarian ethos, ready to unleash his wrath against those who cross his path or bring threat to his family, especially his mother Ellen. 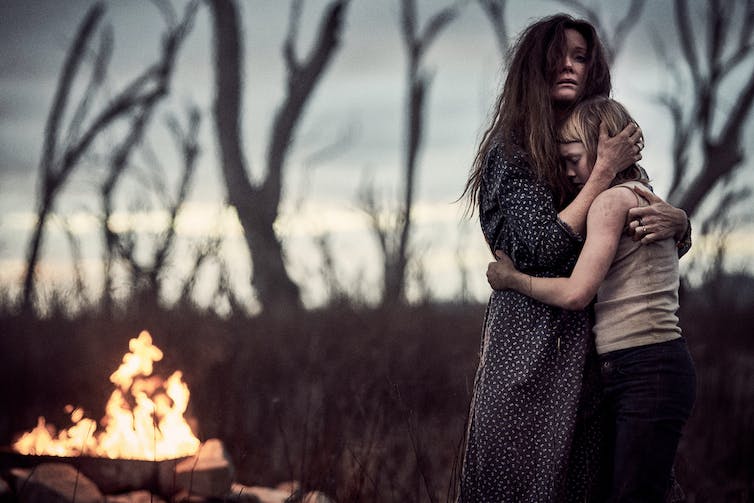 Essie Davis gives Ned’s Ma a wonderful depth and pathos in an often limiting and redundant role. Screenwriter Shaun Grant illuminates her in a way that has been lacking for this crucial character in previous screen depictions.

The film opens with a sentence declaring, “Nothing you’re about to see is true”. The word “true” remains on the screen as the other letters fade, replaced by the film’s title. Any sense of “truth” here is to be considered as a mythical interpretation.

Kurzel removes any suggestion Ned led a hero’s life or died a champion of his people.

Here, there are no scenes of Ned robbing banks to fund the poor and impoverished: Kurzel suggests the money was used to line the gang’s own pockets. 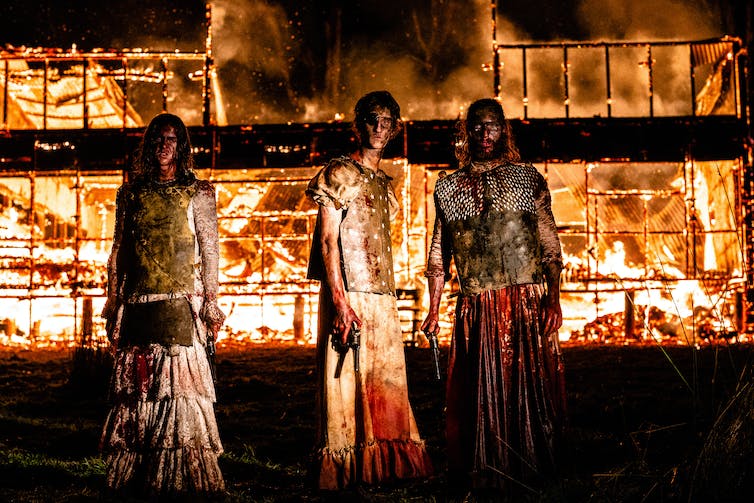 In this telling of the Kelly Gang, Ned Kelly is given clear choice and accountability. Stan

There is no reference to the burning of the town’s mortgage bonds during the Jerilderie bank heist. There is no court case and blatant cover ups during the trial. There is no Judge Redmond Barry, deliciously played by Frank Thing in the 1970 film, openly baying for Ned’s blood, declaring his contempt to the jury.

Unlike other films – in particular, Gregor Jordan’s Ned Kelly (2003) – this one gives Kelly a clear choice and accountability in the decisions he makes.

The most debated aspect of Ned’s outlawry is the Stringybark Creek massacre, where the Kelly Gang shot dead three police officers who were sent to track and ambush the brothers for the attempted murder of Constable Fitzpatrick.

Often this Stringybark moment is depicted as a “fair fight”, where the ambushed gang has no choice but to return fire. The sequence is remembered, often sympathetically, as an unfortunate but unavoidable moment.

In the 2003 film, Ned (Heath Ledger), crying over the shot and choking Sergeant Kennedy, retorts “Why didn’t you surrender? I wouldn’t have shot ya”. His final assassination bullet becomes an empathetic mercy killing.

In Kurzel’s film, Ned has the choice to circumnavigate the police party. His gang beg him to do so. Ignoring them he attacks, shooting to kill. Standing amongst the dead police officers, Ned severs Sergeant Kennedy’s ear as a souvenir (as opposed to looting his watch in the 2003 film), then howls to the sky.

The animalistic aspect of Ned punctuates the film; he often dances and howls following his moments of bloody combat.

The violence is fierce and shocking with the camera never shying from the spectacle. But in creating such a gloomy miasma, Kurzel offers a truer history to the sanitised and apologetic ways Ned is often lionized as Australia’s great bandit of social justice.

Captured during his last stand at Glenrowan and sentenced to death, Ned sits isolated in a barren and hollow Melbourne Gaol. 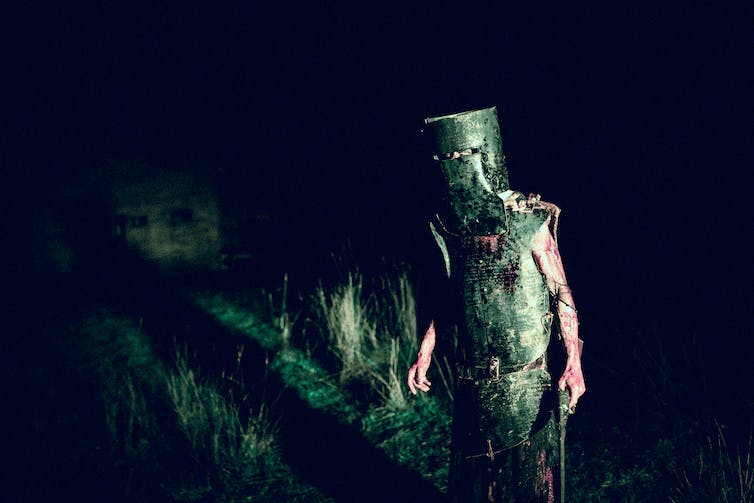 Kurzel places the brutality and despair of Kelly’s story at the centre. Stan

The spectacle of the hundreds of sympathisers outside the gaol gates is not shown or suggested to even exist. The pressmen who were permitted inside to witness and report the death are also unseen.

Save one visit from his incarcerated mother, Ned’s death is solitary and abandoned. There is no one to mourn or show him sympathy.

Kurzel’s Kelly is no sympathetic bandit. Nor is he worthy of compassion or forgiveness. Creating such a hopeless situation presents a deeper understanding of what drove Ned Kelly to his depths of sheer brutality and despair.

For that, Kurzel creates the most complex and complicated Kelly ever put on screen.

True History of the Kelly Gang is in cinemas for a limited release from January 9, and on Stan from January 26.