The Bureau of Meteorology’s annual climate statement released today confirms 2019 was the nation’s warmest and driest year on record. It’s the first time since overlapping records began that Australia experienced both its lowest rainfall and highest temperatures in the same year.

Globally, 2019 is likely to be the second-warmest year, with global temperatures about 0.8 °C above the 1961–1990 average. It has been the warmest year without the influence of El Niño.

Across the year, Australia experienced many extreme events including flooding in Queensland and large hail in New South Wales. However, due to prolonged heat and drought, the year began and ended with fires burning across the Australian landscape. 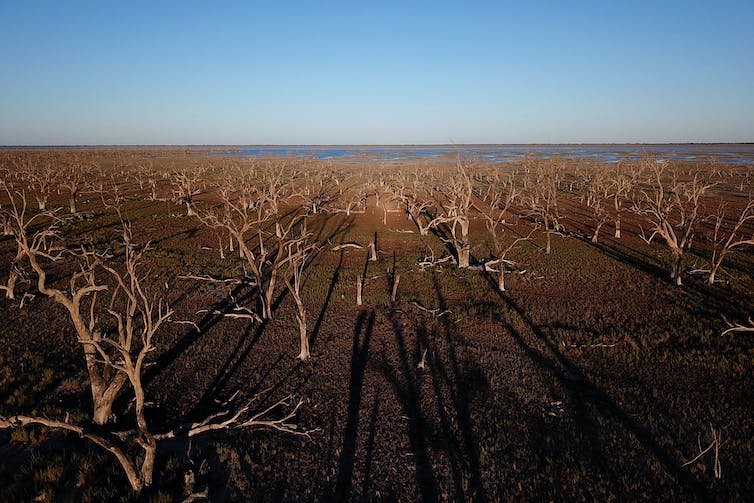 Part of Menindee Lakes on the Darling River, which is under pressure from low water flow as a result of the prolonged drought. Dean Lewins/AAP

The effect of the long dry

Bushfire activity for the 2018–19 season began in late November 2018, when fires burned along a 600km stretch of the central Queensland coast. Widespread fires later followed across Victoria and Tasmania throughout the summer.

Persistent drought and record temperatures were a major driver of the fire activity, and the context for 2019 lies in the past three years of drought. 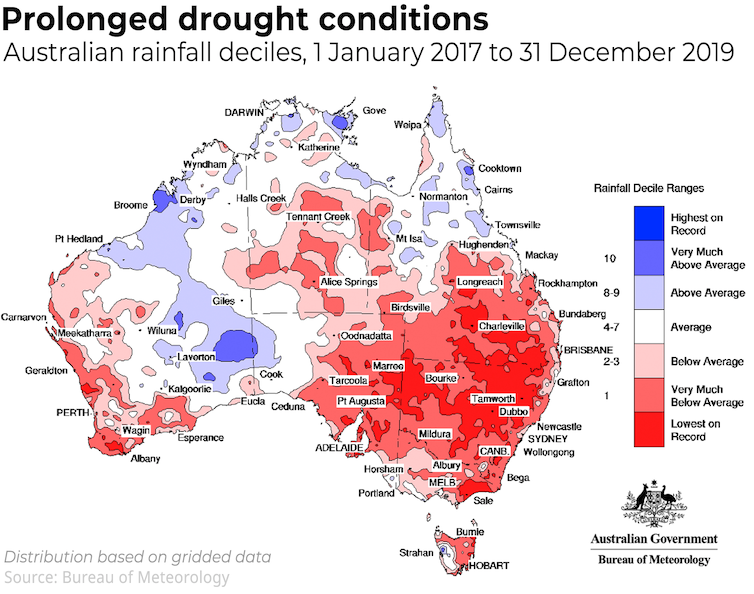 Almost the entire continent experienced rainfall in the lowest 10th percentile over the year. Record low rainfall affected the central and southern inland regions of the continent and the north-eastern Murray–Darling Basin straddling the NSW and Queensland border. Many weather stations over central parts of Australia received less than 30mm of rainfall for the year. Every capital city recorded below average annual rainfall. For the first time, national rainfall was below average in every month. 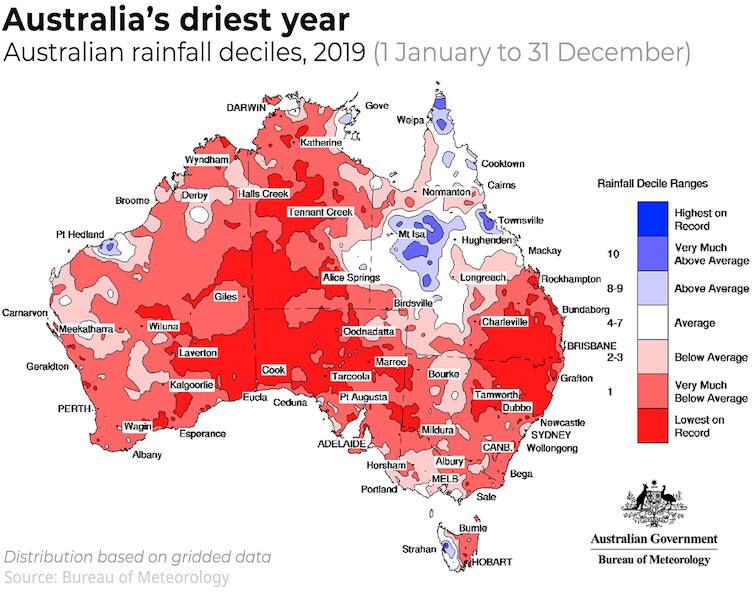 Record heat dominates the nation 2019 was Australia’s warmest year on record, with the annual mean temperature 1.52°C above the 1961–1990 average, surpassing the previous record of 1.33°C above average in 2013. January, February, March, April, July, October, November, and December were all amongst the ten warmest on record for Australian mean temperature for their respective months, with January and December exceeding their previous records by 0.98°C and 1.08°C respectively. Maximum temperatures recorded an even larger departure from average of +2.09°C for the year. This is the first time the nation has seen an anomaly of more than 2 °C, and about half a degree warmer than the previous record in 2013. 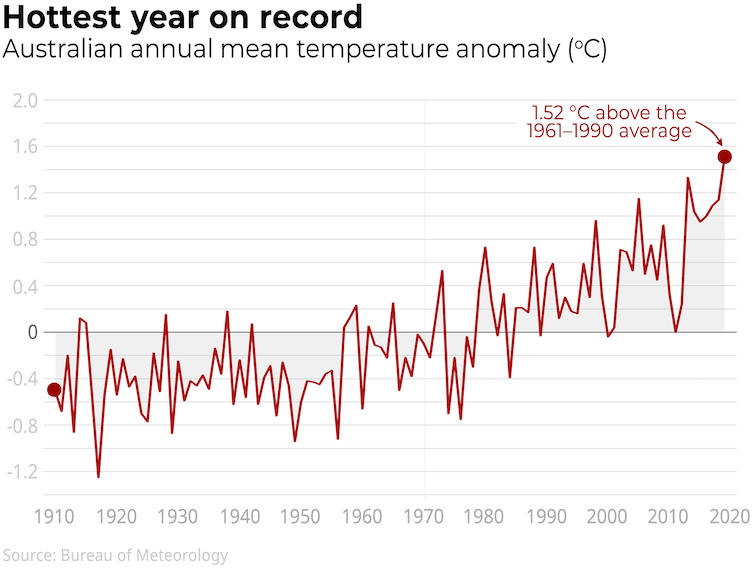 The year brought the nation’s six hottest days on record peaking at 41.9°C (December 18), the hottest week 40.5 °C (week ending December 24), hottest month 38.6 °C (December 2019), and hottest season 36.9 °C (summer 2018–19). The highest temperature for the year was 49.9 °C at Nullarbor (a new national December record) on December 19 and the coldest temperature was –12.0°C at Perisher Valley on June 20. Keith West in southeast South Australia recorded a maximum 49.2°C on December 20, while Dover in far southern Tasmania saw 40.1°C on March 2, the furthest south such high temperatures have been observed in Australia. Accumulating fire danger over 2019 The combination of prolonged record heat and drought led to record fire weather over large areas throughout the year, with destructive bushfires affecting all states, and multiple states at once in the final week of the year. Many fires were difficult to contain in regions where drought has been severe, such as northern NSW and southeast Queensland, or where below average rainfall has been persistent, such as southeast Australia. The Forest Fire Danger Index, a measure of fire weather severity, accumulated over the month of December was the highest on record for that month, and the highest for any month when averaged over the whole of Australia. 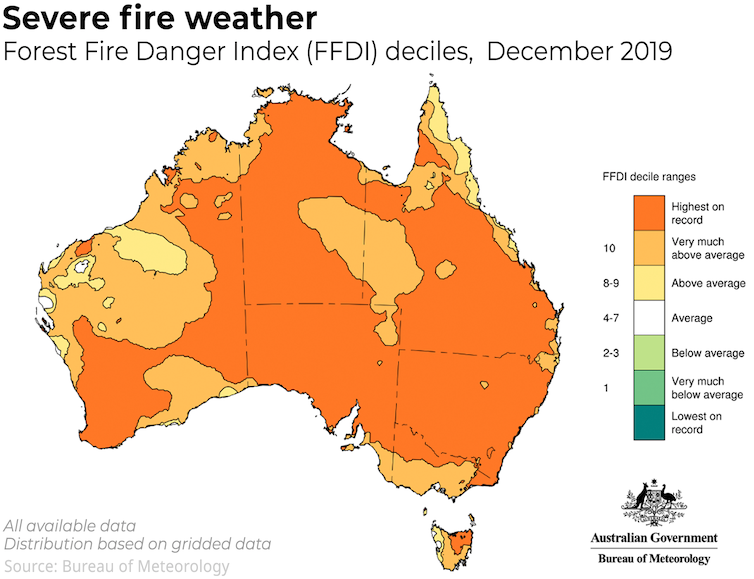 Record-high daily index values for December were recorded at the very end of December around Adelaide and the Yorke Peninsula in South Australia, East Gippsland in Victoria and the Monaro in NSW. These regions which experienced significant fire activity. Don’t forget the floods Amidst the dry, 2019 also included significant flooding across Queensland and the eastern Top End. Heavy rain fell from January into early February, with damaging floods around Townsville and parts of the western Peninsula and Gulf Country. Tropical cyclone Trevor brought further heavy rainfall in April in the eastern Northern Territory and Queensland. Floodwaters eventually reached Lake Eyre/Kati Thanda which, amidst severe local rainfall deficiencies in South Australia, experienced its most significant filling since 2010–11. There was a notable absence of rainfall on Australia’s snow fields during winter and spring which meant less snow melt. Snow cover was generous, particularly at higher elevations. 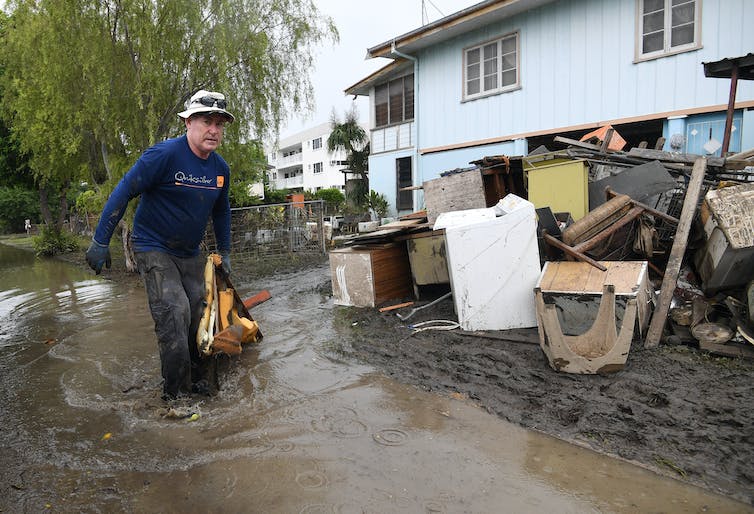 A Townsville resident removes damaged items from a house after the Townsville floods in early 2019. Dan Peled/AAP What role did climate change play in 2019? The climate each year reflects random variations in weather, slowly evolving natural climate drivers such as El Niño, and long-term trends through the influence of climate change. A strong and long-lived positive Indian Ocean Dipole – another natural climate driver – affected Australia from May until the end of the year, and played a major role in suppressing rainfall and raising temperatures for much of the year. Spring brought an unusual breakdown of the southern polar vortex which allowed westerly winds to affect mainland Australia. This reduced rainfall, raising temperature and contributing to the increased fire risk. Climate change continues to cause long-term changes to Australia’s climate. Conditions in 2019 were consistent with trends of declining rainfall in parts of the south, worsening fire seasons and rising temperatures. Read more: Australia can expect far more fire catastrophes. A proper disaster plan is worth paying for