As the Australian Open gets underway, one question on every tennis fan’s mind is whether 2020 will be yet another year dominated by the “Big 3”, the nickname given to the three most accomplished players of the Open era – Rafael Nadal, Novak Djokovic and Roger Federer.

That success can be best captured by their results at the Grand Slams. Since 2003, the year Federer won his first major title at Wimbledon, there have been 68 majors up for grabs and the Big 3 have collectively won 55 of them – or about 80%.

Federer now has 20 major singles titles, making him the all-time Grand Slam leader among the men, though Nadal (19) and Djokovic (16) are not far behind.

What is especially remarkable is that, with a total of 104.8 years between them, the Big 3 are still at the top of the ATP world rankings. And they will be the favourites to win yet another Grand Slam trophy at this month’s Australian Open as the top three seeds.

The ‘Next Gen’ players most likely to succeed

Although many will expect another Grand Slam sweep by the Big 3 this year, the 2019 season ended with strong indications that the reign of Djokovic, Nadal and Federer could be nearing its end.

The main indicators were several big results from a young crop of players. Seven players born after 1990 all had victories over one or more of the Big 3 last year – Stefanos Tsitsipas, Alexander Zverev, Andrey Rublev, Daniil Medvedev, Dominic Thiem, Nick Kyrgios and Grigor Dimitrov.

Matteo Berrettini can also be added to this group for breaking into the Top 10 and reaching the ATP Finals, despite still having no wins over the Big 3.

One of the notable achievements of these “Next Gen” players (as the ATP Tour calls the younger stars) was a combined 3-2 record against the Big 3 in Grand Slams last year. Djokovic lost to Thiem at the French Open, while Federer fell to Dimitrov at the US Open and to Tsitsipas at the Australian Open.

The two “Next Gen” losses both came in the finals and both at the hands of Nadal: Thiem at the French Open and Medvedev at the US Open.

Read more: Why so many tennis players go pro even though few 'make it'

These rising stars reached their greatest heights in the last quarter of the season. Three “Next Gen” players eliminated the Big 3 before the semifinals of the Shanghai Masters, something that has only happened 11 times out of 72 Masters events played since 2011.

The four who did reach the Shanghai semifinals – Thiem, Tsitsipas, Medvedev and Berrettini – were also the four youngest players to qualify for last year’s ATP Finals, where only the top eight players in the world compete. 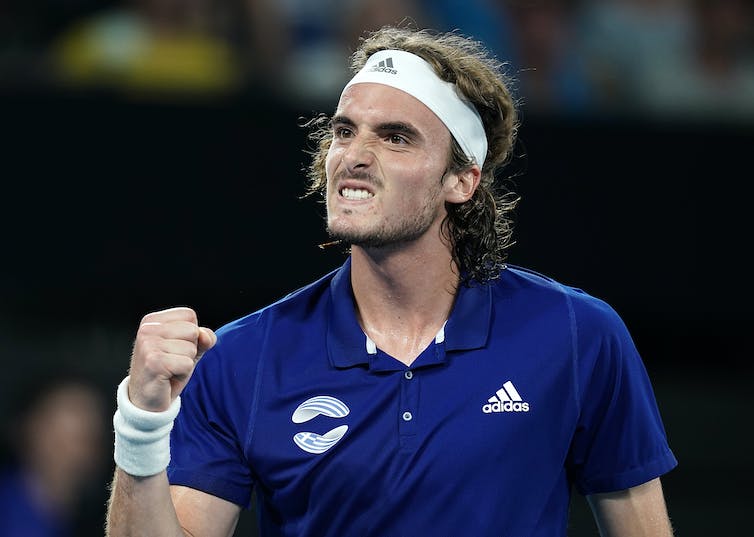 Tsitsipas has five career wins over the Big 3, including a victory against Federer at last year’s Australian Open. Dave Hunt/AAP

Rating players over their careers

A Grand Slam title is the final milestone – and the most difficult – for a “Next Gen” player to achieve. Could 2020 be the year when one of them finally breaks through? And who are the best prospects among them?

One indicator is the journey each of the Big 3 took before their maiden Grand Slam titles. This can show us which up-and-comers are following a similar path.

Player ratings, a statistical measure of a player’s strength at any point in time, are a great way to trace a career journey because they are updated with every new result and adjusted for the strength of a player’s opponents, which makes cross-generational comparisons possible.

Most of the top 100 male players in the world are currently rated between 2,000 and 2,300 points on the scale. The Big 3 are far ahead of the field, however, with ratings between 2,560 and 2,670. Djokovic has the highest rating going into the Australian Open, after his success at the ATP Cup earlier this month.

When we chart the ratings of the Big 3 from age 18 until they won their first Grand Slam, we can see each took a different course to get there (these are indicated by the blue lines in each panel below).

Nadal exploded onto the scene, winning his first French Open title in 2005 before his 19th birthday. Djokovic was next-fastest, getting his first major title at the 2008 Australian Open at just 20 years old. Federer, meanwhile, had the longest journey to his first major title, which he didn’t win until Wimbledon in 2003, when he was two months away from his 22nd birthday. 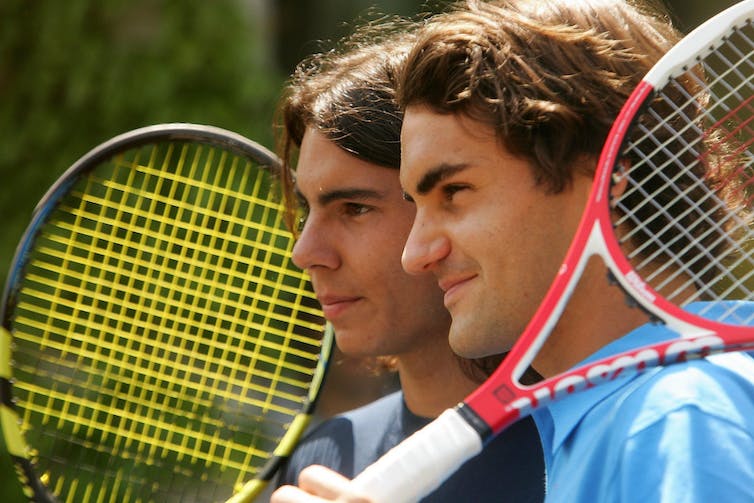 Nadal and Federer before their semifinal match at the 2005 French Open. Olivier Hoslet/EPA

Despite these differences, there were some important commonalities in the ratings of the Big 3 heading into their maiden major win.

Six months before this milestone, all had a rating between 2,000 to 2,200 points and all saw an increase in their rating over that time period of 100 points or more.

Which younger players are poised for a breakthrough? If we look at the same trajectories for the best prospects of the players born in the 1990s, we find that three of them, Dimitrov, Kyrgios and Thiem, have already surpassed the ages of the Big 3 when they won their first majors. Tsitsipas and Rublev, by contrast, are the only two among the younger players who still have a chance to stay on track with the progress of one of the Big 3. Tsitsipas’ player rating trajectory is most similar to Djokovic’s path, while Rublev’s chart is tracking closely to Federer’s so far. Medvedev and Thiem have taken longer in their careers to get closer to the Big 3’s Grand Slam results, but the upward trend of their player rating trajectories indicate a breakthrough could be in the making. Read more: You'll never see another teenage tennis champ – here's why This is especially true for Medvedev, the younger of the two. His player rating plateaued at age 21, much like Federer. Since then, however, he has amassed hundreds of rating points in a short time and has reached one Grand Slam final. He is now just a few points shy of 2,500, a rating on par with Nadal and Djokovic around the time of their the first Grand Slam wins. On the basis of his ratings curve, Medvedev would seem overdue for a Major win. 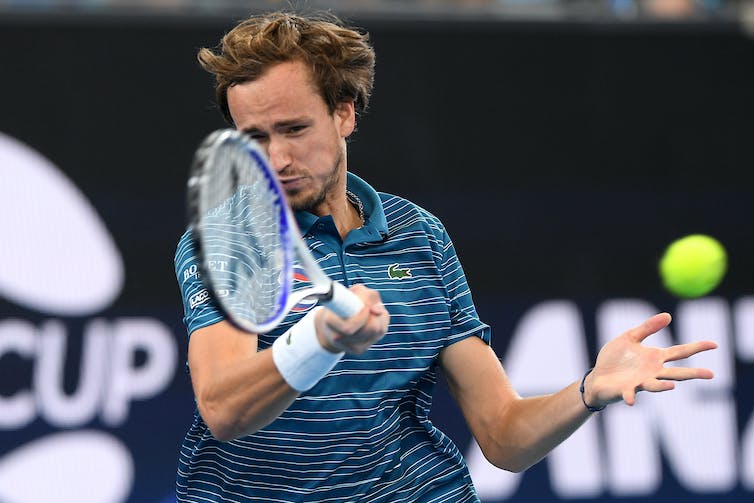 Medvedev is currently ranked a career-high No. 4 in the world. Dan Himbrechts/AAP That is even more the case for Thiem, who is the only other player among the eight with a current rating over 2,400. His comparatively longer journey to a Grand Slam title could be the result of playing in the same era as Nadal, the “King of Clay”. Thiem, a clay court specialist, has come up short to Nadal twice in the French Open final (2018, 2019). Rublev and Berrettini have only recently surpassed a rating of 2,250, and both are remarkable in how quickly they have risen in recent months. The paths of Zverev and Kyrgios, on the other hand, were tracking parallel to Djokovic’s until age 21. Since then, however, they have each seen a downturn in their results, putting their hopes for a major title in 2020 in serious doubt. Of course, no two player paths are exactly alike, so we can never exclude any of these “Next Gen” players from future greatness. But if history does repeat itself, there is a reason to expect big things from Tsitsipas, Medvevdev, Rublev and Berrettini this tennis season.