Australian children have one of the highest rates of antibiotic use in the world. More than half have received at least one course by their first birthday.

While antibiotics are one of the miracles of modern health care, they have some drawbacks. The overuse of antibiotics increases the risk of bacterial resistance in the wider community. For individual children, antibiotics may have side effects, particularly if used inappropriately.

We also have some research about the effects of antibiotic use in early life on longer term health, such as in increasing the risk of asthma, inflammatory bowel disease like Crohn’s disease, and obesity.

New research from New Zealand has found children given antibiotics in the first one to two years of their life may be at a greater risk of having a higher body-mass index (BMI) or becoming obese by the age of four or five.

But the risk is small, and not a reason to withhold antibiotics from a child if they really need them. Let’s take a look.

Read more: Antibiotics before birth and in early life can affect long-term health

A number of studies have suggested antibiotic use, both during pregnancy and in early childhood, may be linked to various chronic conditions, including asthma, gastrointestinal diseases such as Crohn’s disease and coeliac disease, and juvenile arthritis.

Antibiotics in pregnancy have also been associated with an increased risk of serious infections in children.

These reported effects of antibiotics are likely to arise in part from their disruption of the microbiome – the microbial community in our gut. Antibiotics kill off not only the bacteria causing the infection, but also bacteria in the microbiome, including the ones that do us good.

The make-up of our microbiome affects the immune system and is central to harvesting, storing and using energy from food. Scientists believe disruption of the microbiome can affect metabolism.

There’s a lot of evidence from animal studies linking antibiotics with increased weight, and antibiotics have been used as growth promoters in meat production for decades. The possible link between antibiotics and obesity in humans is an area of intense interest.

Childhood obesity predicts obesity in adulthood. And as children are among the highest users of antibiotics, several studies have focused on whether antibiotics in pregnancy and early life are associated with childhood BMI and obesity.

Read more: Health Check: should kids be given antibiotics in their first year?

However, these studies are often small, rely on parent recall for antibiotic use, and don’t account for confounders, such as the mother’s weight or socioeconomic disadvantage.

Two new studies from New Zealand, published yesterday, looked at children from two cohorts – the B4 School Check and Growing Up in New Zealand – hoping to answer this question.

They were large, carefully conducted studies using national antibiotic dispensing data and standardised measurements. The B4 School Check study included more than 150,000 children and their mothers, and the Growing Up in New Zealand study more than 5,000 children.

Both studies found antibiotics taken at every stage through pregnancy and early childhood (one to two years) had an effect on obesity at four years old. The proportion of children who were obese increased with increasing numbers of courses.

The results suggest antibiotics in the first years of life – a period when the microbiome is changing rapidly and most susceptible to outside influences – may have a strong association with later obesity.

Read more: These 3 factors predict a child's chance of obesity in adolescence (and no, it's not just their weight)

Both studies attempted to adjust for important confounders. The Growing Up in New Zealand study adjusted for family demographics, screen time and other lifestyle factors, but the association between antibiotics and BMI remained.

The B4 School Check study tried to control for unmeasured confounders (such as genetics) by looking at twins and siblings where only one child was obese. In doing this, they found the association between antibiotics and weight diminished.

However, because of potential limitations in a sibling study design, such as differing confounders operating in each sibling, sharing of microbiome between siblings, and the smaller sample size, it’s not possible to rule out the overall finding antibiotics are associated with increased weight gain. 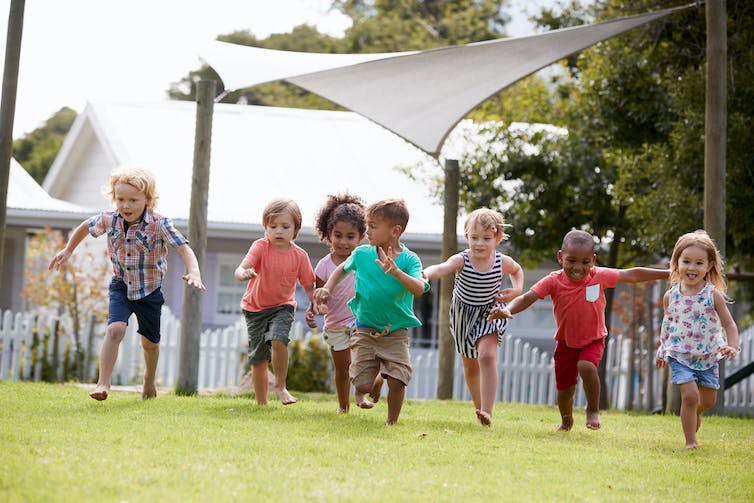 There are many factors that influence a child’s weight. From shutterstock.com

Making sense of the findings

The average four-and-a-half-year-old girl weighs 17.2kg. In both studies, the average weight is over 18kg, so they are already heavier cohorts.

If the adjusted findings (that is, all confounders already taken into account) from the Growing Up in New Zealand study are applied to a four-and-a-half-year-old girl – with no antibiotics, she weighs an average of 18.65kg (already nearly 1.5kg above average weight). If she has received four to six courses she weighs 18.99kg (adding 340g). Both these weights are still within the normal range according to the World Health Organisation and the standards used in the two studies.

The argument could be made these small changes may not be important at an individual level, but may be relevant at a population level or as children get older.

While they don’t provide definitive answers, these two studies contribute high-quality data to the debate. There appears to be some small effect of antibiotics on the metabolism, particularly in the first couple of years of life, when the microbiome is most vulnerable to disruption.

However, this is in addition to many other more important and modifiable factors we know are risk factors for obesity.

Even if the antibiotic association is real, the Growing Up in New Zealand study points out the effect is small in early childhood, especially when compared with factors such as the mother’s weight and socioeconomic disadvantage.

So should I give my baby antibiotics?

Parents can sometimes find the decision of whether or not to give their children antibiotics a difficult one. They may be worried about possible side effects, or the threat of antibiotic resistance in the wider community.

These concerns can all be discussed with a GP, who will advise, based on the child’s illness, the most appropriate course of action.

Although antibiotics should be used only when needed (for example, they shouldn’t be used for viral infections, only bacterial ones), concerns about obesity should not play a significant role in the decision to use antibiotics.

Not using antibiotics when they are clinically indicated will not prevent obesity, and could be harmful to the child.