US President Donald Trump’s “vision” for Israelis and Palestinians is not a realistic peace plan to end a decades-old conflict. Rather, it’s more like a real estate deal in which one side is a recipient of a low-ball offer.

In the meantime, the other side is continuing to expand its hold on property to which it does not have the title deeds under international law. This is not the “deal of the century”, as Trump claims, but an invitation to Israel to assert its sovereignty over swathes of territory seized in the 1967 war.

In return, the Palestinians are being offered a “Swiss cheese” arrangement in which what is left of territory under their nominal control is pock-marked with settlement enclaves that will remain subject to Israeli military occupation.

This does not represent a two-state solution, or even a half-a-state solution. The Trump plan is a recipe for endless occupation of a stunted Palestinian entity with little or no prospect of achieving statehood, or even a basic autonomy free from military occupation.

The latest peace plan will likely join other failed initiatives, like rusting ordnance in the desert after Middle East conflicts.

It will do nothing for regional peace and stability. On the contrary, it will provide a rallying call for extremists across the Middle East who have no interest in reasonable compromise that would enable Israelis and Palestinians to co-exist in neighbouring entities.

The fact that Palestinian representatives were not involved in negotiations on a future outlined by the president of the United States and accepted with alacrity by Israeli Prime Minister Benjamin Netanyahu, one of the most nationalistic and uncompromising leaders in Israel’s history, tells its own story.

The Palestinian leadership severed official contact with the Trump administration in 2017 when Washington recognised Israel’s sovereignty over Jerusalem and shifted its embassy there from Tel Aviv.

The Palestinians can reasonably be criticised for pulling back from direct dealings with the administration, but given Washington’s biases towards Israel, this boycott is hardly surprising.

The Trump plan amounts to not much more than a series of talking points, apart from the green light it gives to Israeli supporters of annexation. In addition, the Palestinian leadership is being asked to agree to terms that fall far short of what had been negotiated in previous peace efforts dating back to the Oslo Accords of 1993. 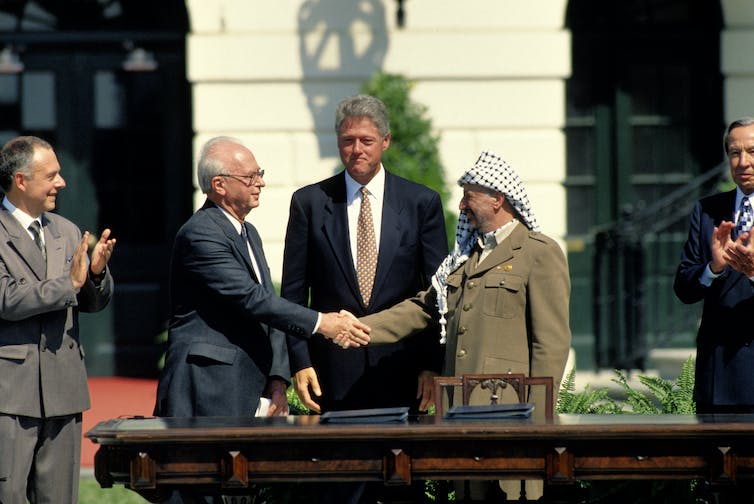 The famous handshake on the White House lawn to signify the accords in 1993 is a distant memory. Shutterstock

Under Oslo, a “Palestinian Self-Governing Authority” would be established for a five-year transitional period, leading to a permanent two-state solution settlement based on United Nations Security Council Resolutions 242 and 338.

These called for the withdrawal of Israeli forces from territories occupied in war.

Sadly, the Oslo process was stillborn due to toxic internal politics on both the Israeli and Palestinian sides. An opportunity was squandered. That was a quarter of a century ago.

Under the Trump plan, the so-called two-state solution is dead for the foreseeable future given that Israel is allowed to annex territory under its control, including the Jordan Valley.

Israel has said it will move ahead with annexation as soon as this coming Sunday.

At the same time, the Trump administration has validated Israel’s settlement-building on Palestinian land in the West Bank by reversing longstanding US policy that regarded these settlements as a breach of international law.

The Trump “vision” should also be viewed in the context of the US administration’s unprecedented accommodation of an ultra-nationalist Israeli government’s priorities.

No Palestinian representatives attended the unveiling in Washington of the Trump plan celebrated by a US president under threat of impeachment and an Israeli prime minister charged with corruption.

Arab attendees came from those countries in the Gulf that could be regarded as American clients: Bahrain and United Arab Emirates. Representatives of Egypt, Saudi Arabia and Jordan were not present. Egypt and Jordan are the only two Arab countries to have peace treaties with Israel.

While Cairo’s response – like that of Riyadh – to the Trump plan has been muted, it is unlikely leaders of these two countries will risk demonstrations that would likely follow overt acceptance of arrangements inimical to Palestinian interests.

Read more: US can no longer be counted on to end Israel-Palestinian conflict

In all of this, the year 1995 should be regarded as the reference point for any discussion of what lies ahead for the Palestinians and Israelis. That was the year a Jewish zealot assassinated Prime Minister Yitzhak Rabin.

Rabin’s death and Netanyahu’s subsequent election effectively stymied efforts to encourage a more constructive atmosphere in which compromise might be possible.

A combination of Netanyahu’s obduracy and a weak and divided Palestinian leadership has meant prospects for peace have gone backwards since Oslo in 1993. The handshake on the White House lawn between Palestine Liberation Organisation leader Yasser Arafat and Israeli Prime Minister Yitzhak Rabin is a distant memory.

The Trump plan is highly unlikely to reverse a continuing drift away from reasonable compromise. It risks making things worse, if that’s possible.