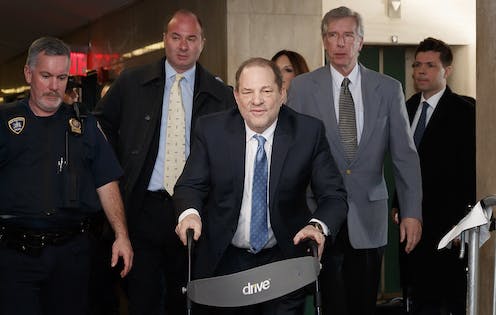 Weinstein’s conviction has been claimed as a “partial victory” for the #MeToo movement, and demonstrative of the collective power of survivors “speaking out” about their experiences. After all, the allegations against Weinstein sparked one of the most profound anti-sexual-violence activist movements in recent history, though we should remember African American activist Tarana Burke initiated Me Too a decade earlier.

On the face of it, Weinstein’s conviction is a clear win for survivors. It provides institutional recognition and vindication after decades of sexual harassment and violence in a context where his behaviour was quietly ignored (if not openly condoned). Victims were often intimidated into silence.

However, achieving justice in response to sexual violence is complex. We should treat the Weinstein conviction with some caution as a victory for the #MeToo movement.

Survivors and the criminal justice system

Firstly, survivors’ justice interests (what they need to happen to feel justice has been achieved) are complex. A conviction alone may not be sufficient to meet these.

Many survivors place an emphasis on being heard and believed, and on their perpetrator acknowledging what they have done. The formal justice system is often unable to achieve these outcomes.

Participation in the criminal justice system is a traumatising experience for many survivors, despite decades of reforms. Survivors are routinely subjected to harrowing and relentless cross-examinations as the defence seeks to undermine their credibility.

Two key witnesses in the Weinstein trial were subjected to intense scrutiny. One reportedly experienced a panic attack when giving evidence. These are not uncommon experiences, and the fear of cross-examination is a strong contributing factor to survivors withdrawing their complaints.

A deeper issue remains for survivors who never had their “day in court”. Access to criminal justice is often contingent on access to resources – financial, social and geographic, among others. This can affect a survivor’s capacity to participate in the justice process.

In this sense, while Weinstein’s conviction may be positive for some of his survivors, we must remember that taking the criminal justice route is not a common path for survivors trying to achieve justice.

Beyond this, it took nearly 100 women coming forward against Weinstein (not to mention the many millions who participated in #MeToo more generally) for the accusations to be taken seriously. This doesn’t speak to a climate in which survivors are believed. If anything, it reproduces the notion that the uncorroborated testimony of survivors should be treated with suspicion.

Justice beyond the system?

What do these challenges surrounding access to justice mean for the millions of other survivors who disclosed through #MeToo? How can we ensure they also achieve a sense of justice in response to their experiences? A victim-centred approach to justice is needed to understand and meet the needs of all survivors of violence and abuse, and move away from the idea that the criminal justice system is the only place justice is seen to be done.

Taking this perspective is important for thinking about justice beyond individuals (as isolated survivors and perpetrators), in order to explore and challenge the structural conditions that enable sexual violence to occur.

While it might be tempting to celebrate Weinstein’s conviction and impending prison sentence (one of the charges carries a five-year minimum prison term), “carceral feminist” responses to sexual (and other) violence – which emphasise having the perpetrator imprisoned – have been heavily criticised for perpetuating race and class inequality.

This has implications for survivors. For example, Indigenous women are reluctant to report experiences of sexual and domestic violence to police. In part this is because they do not want to contribute to the vast over-representation of Indigenous people in our criminal justice system. Further, the criminal justice system is not a “safe” institution for Indigenous people – rather, it is a site of colonisation and injustice.

In this sense, it is important to question how the justice system might avoid reproducing these problematic power dynamics. This reflects broader critiques of the #MeToo movement as being mired in “white feminism”, which largely excludes the voices and experiences of survivors from diverse backgrounds.

Beyond #MeToo, the unglamorous work of change

In adopting a cautious approach to celebrations of Weinstein’s conviction, we are also concerned about the risk of individualising the problem of sexual violence to one perpetrated by “deviant monsters”.

About one in five women (and one in 20 men) have experienced some form of sexual violence since the age of 15. These assaults are not perpetrated by “deviant monsters” but by everyday people who are usually known to survivors. Their behaviour is enabled by social, cultural, political and legal systems that deny women and other survivors the right to bodily autonomy and integrity.

The upshot is that the conviction of Weinstein as a deviant individual deflects attention away from the need to undertake the much harder – and longer-term – task of social, cultural and systemic change. Specifically, we need to talk about what happens after we say #MeToo; something Tarana Burke has described as the “unglamorous” but vital work needed if we are to see any sort of justice for survivors of sexual violence.