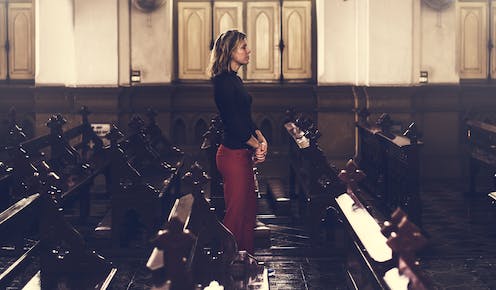 Women still make up the majority of the Catholic workforce and Catholic congregations, but their participation in church life is in decline.

Indeed, each generation of Catholic women in Australia is less likely than the previous one to attend church and participate in parish life.

There are a number of reasons for this decline, one of which is a continued lack of action by church leadership in including women in agenda-setting and decision-making processes in church life.

Despite recommendations from the Child Abuse Royal Commission that church leaders undertake a review of their engagement of Catholic women and develop measures to increase women’s status and participation in the church, there has been little progress to date.

A long-discussed problem in the church

The disbanding of the OPW and CACW signals a giant step backwards for the church, and contradicts the radical reforms the Australian bishops committed to almost 20 years ago aiming to

engage the wisdom, the talents and the experience of women for the enrichment of the church and of society.

Research commissioned by the ACBC, published in the report Woman and Man: One in Christ Jesus in 1999, examined the participation levels and experiences of women in the church. It clearly identified several barriers to improvement, including a failure to address gender equality, and the lack of women in official positions or visible female role models.

The report also revealed the majority of Australian Catholics felt a strong sense of pain and alienation resulting from the church’s stance on women.

Few of the original ACBC recommendations have been implemented and there is now no clear agenda for addressing the challenges raised by the report.

Women theologians not being consulted

Later this year, the Catholic Church in Australia will hold its Fifth Plenary Council, providing some hope to women their voices will finally be heard.

On the agenda are six national themes, which emerged from consultations with the Catholic community in Australia.

The bishops have committed to addressing “the inclusion of women in church leadership roles” and “draw on the gifts and talents” of women, but how this will happen is uncertain with no mandate or quota for women to attend as delegates.

A further disappointment is the continuing failure to recognise the expertise of Catholic women theologians.

Read more: The Catholic Church is headed for another sex abuse scandal as #NunsToo speak up

Next week, 70 theologians and ethicists from around the world will gather in Rome for a workshop that will examine questions around church abuse.

Australian theologians will be well-represented at the gathering, but there are no women among the four delegates, despite a plethora of highly-qualified women theologians in Australia.

Recently, the Global Church Project published two blogs highlighting the work of over 160 women theologians from Australia and New Zealand, many of whom have published extensively on clerical sexual abuse and spiritual trauma.

This isn’t just a problem in Australia. Globally, Catholic women continue to be sidelined from important gatherings and processes determining the future of Catholicism. As a consequence, many women are beginning to mobilise for change.

In Spain, for instance, women theologians have joined together to speak out about equality and dignity for women in the Church. And Indian nuns are risking persecution by going public with stories of sexual assaults by priests.

Catholic women’s groups from five continents have also formed the Catholic Women’s Council (CWC), which is calling for Catholic women worldwide to take part in global activism on International Women’s Day this year. The Australian organisation Women and the Australian Church (WATAC Inc.) is part of this movement.

Despite these actions, though, the current situation looks grim. With a lack of political will, the full participation of women in the life and mission of the church is a still a long way from being realised. And women are responding by moving out of the church or mobilising for change.