Clubs, pubs, movie theatres and gyms will be closed and restaurants will only be able to provide takeaways in draconian measures to fight the spread of coronavirus announced by Scott Morrison late Sunday night.

But schools will stay open, after Morrison wrestled to keep federal and state governments on the same page on one of the most controversial issues in the COVID-19 debate.

The crackdown on social gathering places was agreed by federal and state leaders at their national cabinet meeting earlier in the evening. 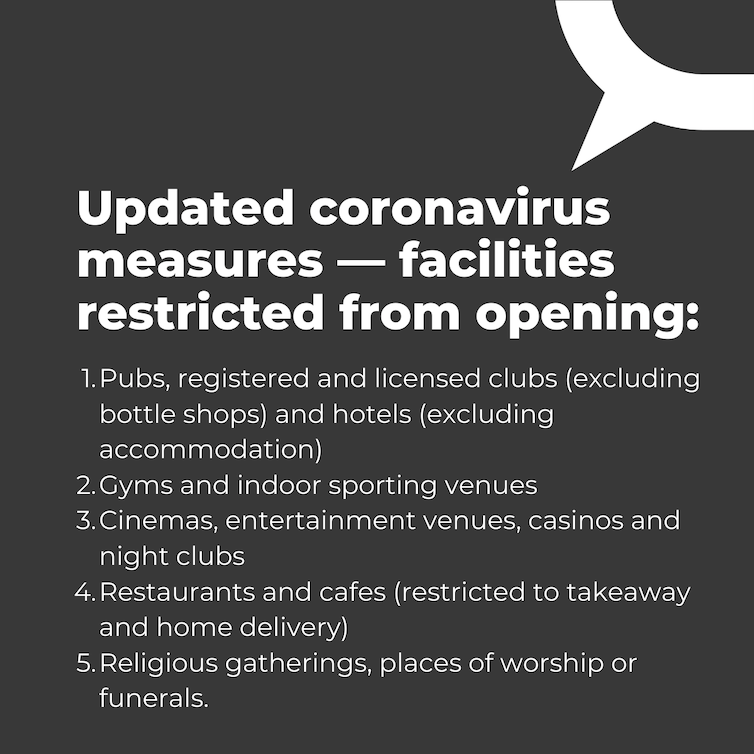 CC BY This followed a day of confusion, with differences between NSW and Victoria on the one hand and the federal government on the other over shutdowns and schools. Earlier, the premiers of the two biggest states had announced they were shutting down non-essential services and activities over the next 48 hours. The ACT followed suit. The premiers’ actions seemed in part to force the federal government’s hand. It is not clear how much further (if any) the “shutdowns” in the two states will go beyond the baseline of closures set at the national cabinet. In his afternoon statement, Victorian premier Daniel Andrews said the state was bringing forward school holidays to start Tuesday (rather than Friday) with a decision on whether schools will reopen to be taken on medical advice. NSW Premier Gladys Berejiklian said she would have something to say about schools on Monday morning. Read more: Scalable without limit: how the government plans to get coronavirus support into our hands quickly The Prime Minister pushed back over schools, anxious to keep them open for educational reasons and to maintain the numbers of health workers. It has been estimated that closing schools could cut the health workforce by 30%. Morrison said from midday on Monday a range of facilities where social gatherings took place would be closed or have their operations curtailed. He envisaged this would last six months. Pubs, registered and licensed clubs will be shut (excluding bottle shops attached to these venues), as well as hotels (excluding accommodation) Gyms and indoor sporting venues will be closed Cinemas, entertainment venues, casinos, and night clubs will shut Restaurants and cafes will be restricted to takeaway and/or home delivery Religious gatherings cannot go ahead and places of worship are to close. Funerals in enclosed spaces can proceed only with very small groups and where the 1 person per 4 square metre rule applies. “This should highlight to all Australians how serious this is,” Morrison said. He said there was no change in the medical advice that schools should remain open. Leaders agreed children should go to school on Monday and “committed to re-open schools at the end of the school break, subject to the advice of the Australian Health Principal Protection Committee”. “I don’t want to see our children lose an entire year of their education, ” Morrison said. “That’s what we’re talking about here. This is very serious. If you’re a four year old child at pre-school, you don’t get your four years old year back”. “What we will be doing, though, is allowing parents to the end of this year’s school term to be able to keep their children home where they choose to. But for all of those parents who wish to send their children to school for an education at the school, those schools will remain open”. Asked about Andrews’ comments about reviewing the schools position after the holidays, Morrison said: “the Premier has reaffirmed his commitment this evening that is the intention of the Victorian government to reopen schools subject to the health advice at that time”. Read more: The case for Endgame C: stop almost everything, restart when coronavirus is gone He stressed to parents who decided to keep their children home that they “must take responsibility for those children. "It’s not an excuse for them to go down the shopping centre or to go and congregate somewhere else or potentially put themselves in contact with the vulnerable and elderly population. If you choose to keep your child at home, you are responsible for the conduct and behaviour of your children.” Morrison said the coming school holidays “will not be a holiday as it is normally known”. “There will not be trips interstate. … There will not be congregating up at the trampoline venue.” There had to be very strict rules around social distancing, he said. “This is a critical time. An absolutely critical time. The decisions that parents make, that we all make, over the course of the next few weeks in particular could very seriously determine the trajectory that Australia continues to go on in relation to the coronavirus”. He “implored” Australia to follow the advice about distancing and size of gatherings. Federal and state governments have been shaken by the rapid rise in virus cases – now well above 1000 – and by the crowds on Friday and Saturday on Bondi beach and at bars and clubs. “On the weekend, what we saw was a disregard of those social distancing practices as people turned up to the beach in large numbers, crammed venues in our major cities. "This sent a very clear message to premiers, chief ministers and myself that the social distancing practices are not being observed as well as they should be”. Morrison said the leaders did not now have any confidence that people, notably the young, would refrain from congregating in pubs and clubs and the like. “We have no confidence that [guidelines on social distancing] will be followed”. “If guidelines can’t be followed, then for public health reasons we now need to take a further action which shuts those gatherings down. ”‘They are the principal places of social gatherings which are at greatest risk". By the end of Sunday, Morrison’s $66 billion stimulus package had been considerably overshadowed by a new stage of restrictions, driven by public flouting of social distancing guidelines and the determination of NSW and Victoria to see more drastic action. But while there has been a quantum leap in the measures in the battle against the virus, there remains a lack of clarity and Monday is likely to see more public frenzy of one sort of another. Morrison insisted “all members of that national cabinet have reaffirmed our commitment to just how important the national cabinet is to ensure that all governments are working closely together.” He is trying to keep the national cabinet - an unprecedented beast in Australian political history - in lockstep. We’ll see whether he has actually managed to do so when the premiers have more to say.