Mention the phrase “sex tourism” in conversation and most people will cringe in disgust.

Consent matters in sexualised touristic spaces. It can’t be taken for granted just because a space is hyper-sexualised. Workers are continuously negotiating consent. They can and should be able to withdraw consent at any time.

Most people who regularly engage in these practices recognise this. Venues are increasingly taking responsibility for this issue too, but there is still work to do. 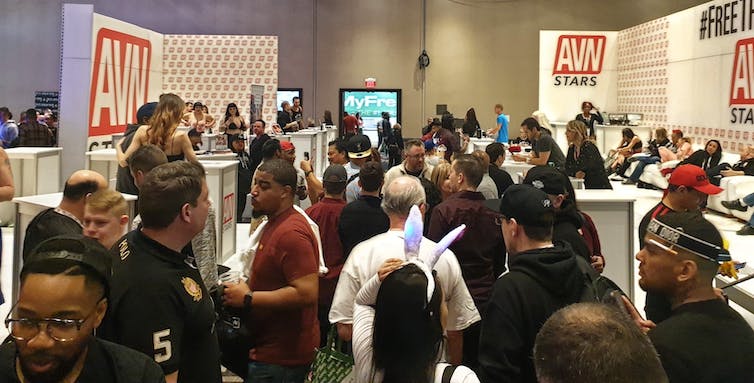 In the hypersexualised atmosphere of events like the AVN Expo, consent matters more than ever. Paul Maginn, Author provided

As we note in our recent research paper, the touristic gaze involves more than just looking. It includes “touching or being touched (physical or emotionally), buying, moving around and talking”.

Different cities are renowned for particular forms of sexualised leisure/tourism.

Sydney, for example, is globally recognised for its Gay and Lesbian Mardi Gras. The Folsom Street Fair in San Francisco is arguably the tourist capital for fetishists from around the USA and the world. Paris is the tourist city for romantic getaways. And in the UK the “dirty weekend” is synonymous with seaside towns such as Brighton and Blackpool.

Other UK cities such as London, Liverpool and Newcastle, plus European cities such as Amsterdam, Dublin and Prague, are popular destinations for stag or hen parties. These may include visits to strip clubs, brothels, sex shops and casual or hook-up sex.

Casual/hook-up sex in Miami, Fort Lauderdale, Cancun and Cabo San Lucas is popular for US college students during “Spring Break”. During “Schoolies Week” in Australia, high school graduates hit destinations such as the Gold Coast, Byron Bay and Bali.

But if there is one city that personifies sexualised leisure tourism and hedonistic urbanism it is the US city of Las Vegas, Nevada – aka “Sin City”. Nevada has “built a tourist industry on turning deviance into leisure”.

Pascale Nédélec notes that Las Vegas has aggressively marketed itself as a “free-wheeling, anything-goes kind of place”. Its long-running advertising slogan is “What Happens Here, Stays Here”. 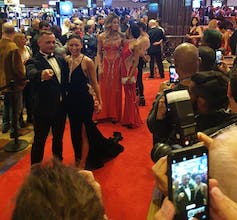 Every January the sexualised touristic gaze within Las Vegas ramps up when the AVN Expo sets up camp at the Hard Rock Hotel and Casino (soon to be rebranded).

The meet-and-greet aspect is where the touristic gaze is particularly intense. In a panel we organised at the 2020 AVN Expo, performers Jessica Drake and Katy Jayne said they often felt an even more intense gaze when winding their way to their hotel rooms, restaurants and bars within Hard Rock’s broader spaces.

Admittedly the expo encourages a sexualised touristic gaze by largely heterosexual male attendees. But this in no way negates the importance of negotiated consent in interactions between fans and performers. 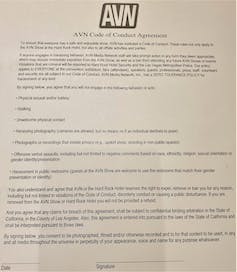 A “mix of physical, social and institutional boundaries and formal and informal rules of engagement” prevails within the AVN Expo space. Attendees – performers, media and fans – must sign a “code of conduct”. Signage around the expo space reminds patrons of the AVN’s policy of zero tolerance of anyone found and/or reported to have engaged in assault, non-consensual physical contact, violations of privacy, and verbal or physical harassment.

While this code isn’t perfect, our research found it’s part of a “mix of physical, social and institutional boundaries and formal and informal rules of engagement”. These help keep non-consensual contact to a minimum and empower the performers to negotiate their own boundaries.

A charter of consent helps

When sexualised leisure activities are an important part of a city’s tourism or night-time economy, it is critical for government officials, local businesses and advocacy organisations that represent workers in sexualised tourism to come together and develop what might be termed a “charter of consent”.

Such a charter would set out the essential “rights, roles and responsibilities” of participants. It could also highlight the repercussions for those who transgress consensual boundaries.

This charter could be widely promoted via traditional and social media, creative marketing strategies (e.g. drinks coasters, receipts, online adverts, and posters in restrooms in bars, clubs and restaurants), as well as signage in sexualised tourism/leisure spaces to remind tourists consent is paramount.

With active promotion and demonstrated commitment by regulators, such a charter would help give those on the front line of providing sexualised leisure experiences the confidence to report non-consensual or inappropriate behaviours to their employers and relevant authorities.