As we witnessed last summer, the number of houses destroyed during bushfires in Australia has not been stemmed by advances in weather forecasting, building design and the increased use of large water-bombing aircraft.

At the latest count, more than 3,500 homes were destroyed the summer just gone, which makes this the most destructive bushfire season in Australia’s history.

The principal reason for the continually high rate of destruction is that so many homes are being built close to bushland. An estimated 85% of all houses destroyed in bushfires in Australia are within 100m of the bush.

It follows that clearing vegetation around houses is at the forefront of advice provided by fire authorities to homeowners in bushfire-prone areas.

A home without trees and shrubs around it is the safest option during a bushfire. But realistically, many people will want to retain some vegetation. And there are ways to do this sensibly.

Is clearing bushland the solution?

Research shows houses close to bushland are more effectively protected by clearing trees and shrubs within approximately 40m of the home.

There are laws in most states and territories, such as New South Wales’ 10/50 Vegetation Clearing Scheme, that permit this to some extent.

But if all homeowners in bushfire-prone areas exercised their right to clear trees and shrubs, places such as the Blue Mountains, Perth Hills, Mount Lofty Ranges, Dandenongs and our coastal towns like Mallacoota, Margaret River and Batemans Bay would be vastly different in character.

Residents and tourists are attracted to these areas for the aesthetics, privacy, wildlife and shade native trees and shrubs provide.

A study of rural-residential areas north of Melbourne found property values were higher where there was a considerable cover of native vegetation. We not only like our native bush, we are prepared to pay for it.

Because many people value trees and shrubs around their homes, it is not realistic to expect uniformly low fuel loads within bushfire-prone parts of Australia.

Can we have our cake and eat it?

We analysed data collected before and after the 2009 Black Saturday Fires, in which 2,133 houses were destroyed.

We found that the extent of “greenness” of vegetation surrounding homes had a bearing on whether the structure withstood fire.

Greenness refers to the extent to which plants are actively growing. Houses with trees and shrubs within 40m were slightly less likely to be destroyed if the vegetation had relatively high values of “greenness”, as compared to houses surrounded by vegetation with low greenness value.

This makes sense because greener vegetation, typically with higher moisture content, has lower flammability, requires more energy to ignite and therefore can reduce the intensity of a fire.

Thus, watering your garden through summer, if this is feasible, or choosing plants with high moisture content (such as succulents) may reduce the bushfire risk compared with the same amount of vegetation with a lower moisture content.

We also found the risk to houses during bushfire was slightly less where trees and shrubs within 40m were not continuous, but instead arranged as discrete patches separated by a ground layer with low fuel hazard, such as mown grass.

As trees and shrubs become less continuous the heat transfer between patches becomes less efficient and the intensity of the fire is likely to decline.

This makes sense because burning embers, which are the main cause of house losses during bushfires, travel in the direction of the wind. 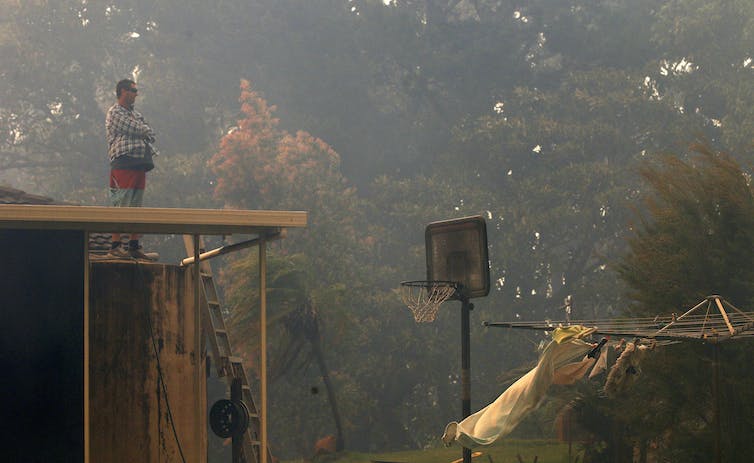 Clearing vegetation around homes is at the forefront of advice from fire authorities. AAP

You can’t eliminate risk from bushfires

We must emphasise that while these strategies can strike a balance between retaining trees and shrubs and preparing for bushfires, they will not guarantee your home will survive a bushfire – especially in severe fire weather.

So in addition to vegetation management, other strategies – such as building design, adequate insurance and evacuating early to a safer place – should be considered in every household’s bushfire planning.