Debate about how Australia will emerge from the coronavirus pandemic is heating up. As part of the economic recovery, business groups have renewed calls to cut “green tape” – environmental regulation that new projects, such as new mines, must follow.

However a major ten-yearly review of the federal government’s key environment legislation is not due to be finished until October. 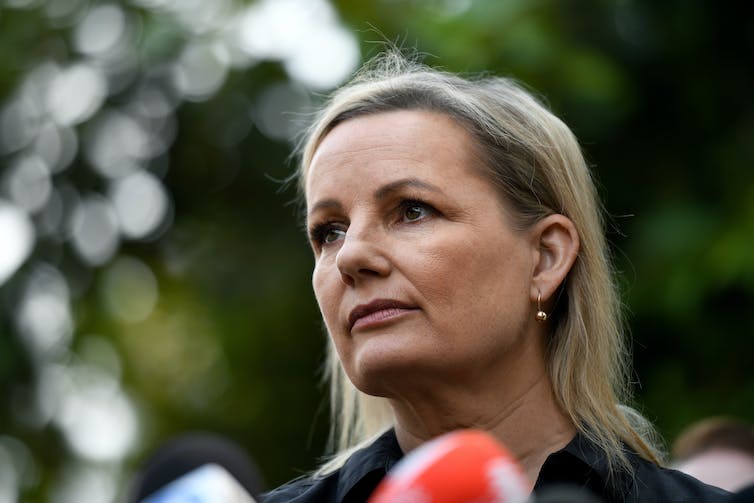 But this isn’t the case. In my 30 years of experience researching water pollution, “green tape” has not translated into effective environmental regulation of industry. In fact, I’m yet to see a coal mining operation that’s effectively regulated after approved through the NSW and federal environmental assessment processes.

Here are five examples that show how existing environmental regulations have done little to prevent pollution and toxic chemicals from entering the environment.

My research on water pollution from coal mines in the Sydney basin routinely reveals inadequate environmental regulation. I’ve repeatedly uncovered long-standing environmental issues the industry doesn’t seem to learn from, such as pollution continually leaching from active and closed mines.

As part of my PhD research in 2002/3, I studied Canyon Colliery – a coal mine deep in the Blue Mountains that closed in 1997. The mine constantly releases large volumes of toxic zinc and nickel contaminated water from the flooded underground workings into an otherwise pristine mountain stream.

This caused ecological damage in the Grose River, including a steep reduction in species and numbers of river invertebrates below the entry of the mine wastes into the river. 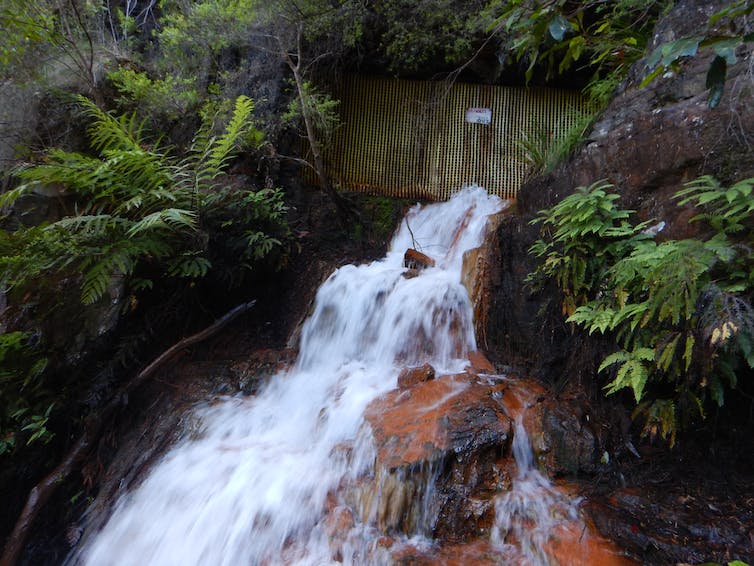 It’s now 23 years since the mining stopped, but the pollution continues – testimony of weak and ineffective environmental regulation. And it will probably last for centuries.

The Canyon Mine is just one of thousands of contaminated, derelict mining and industrial sites dotted around Australia lacking environmental controls.

Environmental regulation has become more stringent in the last 25 years thanks to legislation introduced by the Howard government in 1999, and NSW’s Protection of the Environment Operations Act introduced in 1997.

But despite this legislation, many new and active mines that lead to environmental damage have been assessed and approved.

Research by my team at Western Sydney University has documented pollution from an active Blue Mountains coal mine, Clarence Colliery.

The mine caused severe metal contamination and ecological damage to the Wollangambe, a World Heritage River. Our research led to the NSW Environment Protection Authority (EPA) in 2017 imposing more effective restrictions on the release of toxic pollutants from the mine. 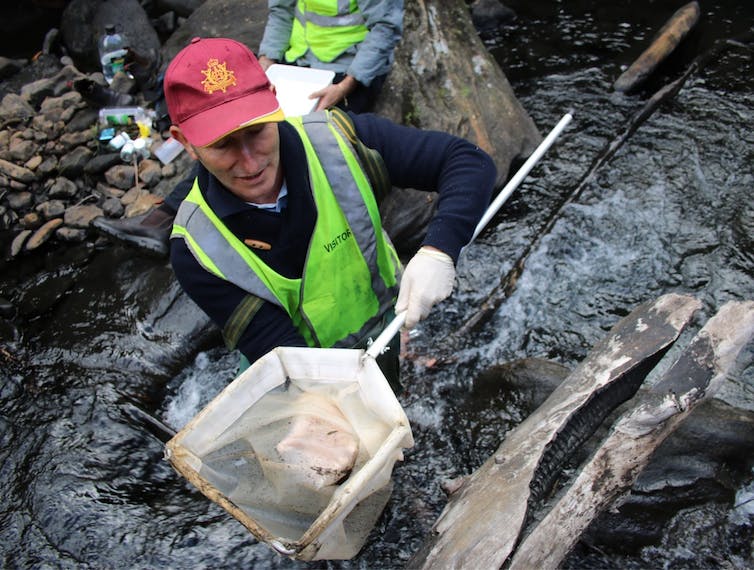 Despite approvals from both the NSW and federal governments, it seemed no one had noticed the magnitude of pollution from poorly treated mine wastes until our research was conducted. This caused ecological degradation to more than 20 kilometres of the highly “protected” Wollangambe River.

The Conversation contacted Centennial Coal, which owns Clarence Colliery, for comment. They directed us to their statements in 2017, when the EPA finished a five-year review of Clarence’s Environmental Protection Licence (EPL). Then, the company said:

As a result of this review Clarence will operate under a new EPL which will include agreed reductions in metal concentration limits for all water discharged to the Wollangambe. Salinity targets will also be set at 100 EC (electrical conductivity).

Clarence will also be required to comply with a Pollution Reduction Programme (PRP), also issued by the EPA, which will result in Centennial formalising options to address all water quality issues and to meet specific water quality milestones.

In 2010 I made a submission as part of the environmental assessment for an extension of BHP Billiton’s Bulli Seam coal mining operations (now owned by South 32).

This involved reading thousands of pages of consultant reports explaining how the expanded operation would attempt to avoid or minimise impacts to the environment.

The mine extension was approved. Despite the many “green tape” hurdles, the approved mine was allowed to discharge wastes which our research discovered contained pollutants that were hazardous to river life in the Georges River. These included salt, nickel, zinc, aluminium and arsenic polluting the upper Georges River.

Environmental groups took the coal mine owner to court in 2012, and I provided my evidence for the court case to the NSW EPA.

The EPA has since worked with the coal miner to reduce pollution from the mine.

Many were stunned on March 16 this year, when the NSW government signed off on new coal mine “longwalls” directly under Woronora Reservoir, part of Sydney’s drinking water supply.

Longwall mining is the continuous mechanical removal of coal in underground mines that allows the roof of the mine to cave in after the coal is removed.

So what can they do to a river? Redbank Creek near Picton – 65 kilometres southwest of Sydney – provides a sad testimony. 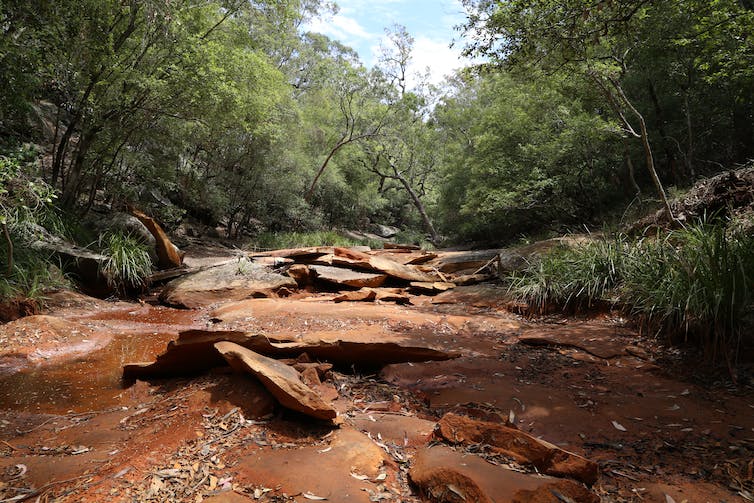 For nearly a decade, I documented damage where falling ground levels (subsidence) caused by longwalls led to extensive damage to the creek channel.

The land surface fell more than one meter. This caused cracking, warping and buckling of the creek channel. It now rarely holds water in many stretches. Isolated stagnant pools in the creek now accumulate saline and metal-contaminated water containing little aquatic life except for mosquitoes.

The mine responsible for this damage, Tahmoor Colliery, is seeking to extend its operations and the NSW government is currently considering the development.

This mine also disposes of about four to eight megalitres of poorly treated wastes each day to the Bargo River, a popular freshwater swimming river for south-western Sydney.

Despite the existence of “green tape”, unforeseen problems have left Australia with many contaminated sites that may never be fully cleaned up.

We’ve seen this in the dozens of locations across Australia where toxic PFAS chemicals have contaminated land, water, ecosystems and people.

Read more: A blanket ban on toxic 'forever chemicals' is good for people and animals

These were previously regarded as safe chemical additives, for example in fire fighting foam, particularly at military bases.

Such contamination is very expensive to remediate and in February this year landholders near three defence bases reached a financial settlement for the PFAS damage to their property.

Given my own direct experience involved poorly regulated coal mines, I shudder to imagine the environmental degradation “fast-tracked” environmental regulation will lead to.

Mining in NSW is governed by stringent state and federal laws enforced by a number of government departments and regulators. SIMEC Mining acquired the Tahmoor Coking Coal Mine two years ago and takes its environmental, compliance and social responsibilities seriously.

Tahmoor Mine has been operating for well over 40 years. We acknowledge that historical mine activity did impact Redbank Creek and that this was self-reported to the regulator. Since then, SIMEC has worked closely with the NSW Department of Planning, Industry and Environment (DPIE) to enact a comprehensive plan to rehabilitate the creek. Recent rainfall has demonstrated the success of this work and we are confident that the rehabilitation works will restore the creek.

While our operations do produce water as part of the mining process, this is treated and monitored in accordance with our licence conditions. The quality of this water is mandated by our environment protection licence issued and monitored by the NSW Environmental Protection Authority (EPA). Typically, the water monitoring results are well below those limits allowed by the licence. To further improve water quality, SIMEC Mining has committed to the installation of a new water treatment plant.

Water management has been a key focus for SIMEC in the planning of the proposed Tahmoor South extension. We have commissioned extensive specialist assessments to understand any potential impact on ground and surface water. If our extension is approved, these water assets will be carefully monitored throughout the life of the mine to ensure that should any issue occur, it is detected early and resolved efficiently.