You may have heard about psoriatic arthritis after Kim Kardashian West said last year she was diagnosed with this illness.

Psoriasis is a relatively common chronic skin condition that causes rapid build-up of skin cells, resulting in a rash. Around 20% of sufferers will develop psoriatic arthritis where a person’s joints become inflamed and sore, in addition to the skin symptoms.

Recent evidence suggests that psoriatic arthritis is an autoimmune disease, meaning the body’s immune system mistakenly attacks its own skin and joints.

How common is it?

Around 1% of people in the United States have psoriatic arthritis, and it affects men and women roughly equally.

Symptoms usually begin between the ages of 40 and 50, though they can also begin in childhood or older age.

In around 85-90% of patients, psoriasis symptoms start first.

Psoriatic arthritis is caused by a combination of genetic and environmental or lifestyle factors. Infection, stress, obesity, and smoking have been suggested to increase the risk of developing the condition.

Researchers have also investigated a possible link with gut microbiota, the bacteria that live in the digestive tract. Some think changes in gut microbiota diversity may be involved. However, it’s not clear whether this is a cause or a consequence of chronic inflammation.

What are the symptoms?

Psoriasis causes a skin rash of scaly red patches or plaques that can spread all over the body. Typically it affects the knees, elbows, hairline, ears, natal cleft (the groove that runs between the two buttocks), belly button and nails.

It might be painful and itchy. It usually evolves with a period of flare, where the illness gets worse, followed by a period of improvement. 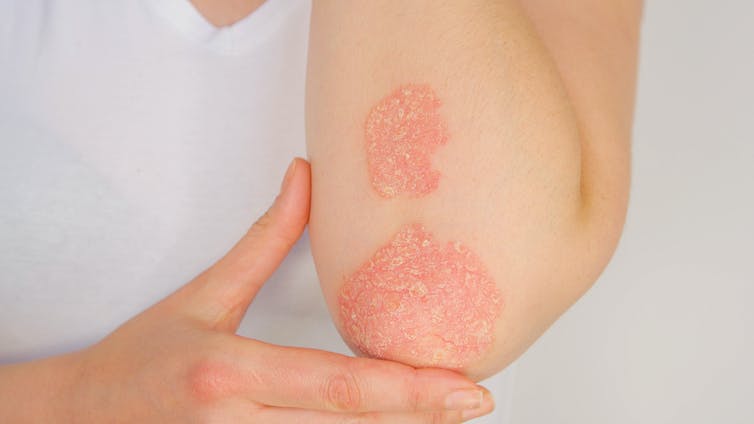 Psoriatic arthritis occurs in one or more joints. It can affect peripheral joints, such as the hands and feet, the spine, and the entheses, where ligaments and tendons attach to bones (such as where the Achilles tendon connects to the heel). In around 40-50% of patients, the entire toe or finger can swell like a small sausage, known as dactylitis. It particularly affects the tips of the fingers and toes, known as the distal joints, as well as the buttocks and lower back.

Arthritis symptoms include pain, redness, swelling, and tenderness of the affected joints. It usually presents with morning stiffness, and joint pain increases while resting and improves while moving. Joint pain can also wake people up at night.

General symptoms can include fatigue, unexplained fever, unintentional weight loss, and loss of appetite. Early diagnosis can be challenging because these symptoms are non-specific and can be mistaken for other illnesses.

There is no single blood or imaging test for diagnosing psoriatic arthritis. Patients with symptoms should be referred to a rheumatologist, where they will be examined.

If psoriatic arthritis is suspected, a doctor will investigate the skin, nails, joints, spine, and entheses, the junctions where ligaments and tendons attach to the bones. They’ll also check for any dactylitis, the sausage-like swelling in the hands and toes.

They will request X-rays of affected peripheral joints and the spine to look for cartilage and bone damage, as well as new bone formations. MRI and ultrasound scans may also help.

Patients will have routine blood tests looking for signs of inflammation, as well as a marker named HLA B27, present in approximately 25% of affected people. 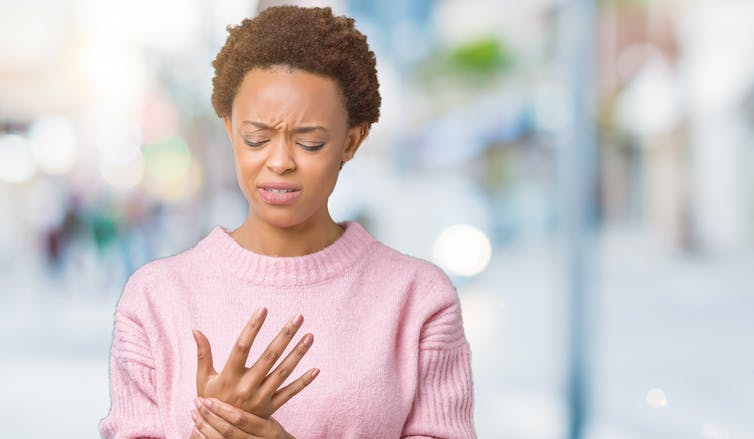 Psoriatic arthritis symptoms often appear in the hands, feet, buttocks and lower back, but other peripheral joints and other part of the spine can also be affected. www.shutterstock.com

Left untreated, patients can suffer joint deformity and damage to bones, cartilage and organs, potentially leading to permanent disability. Early diagnosis and optimal treatment are key to preventing this.

Patients are at increased risk of heart and blood vessel disease due to metabolic syndrome, a cluster of conditions including high blood pressure.

Psychological consequences can also impact patients’ well-being and quality of life. The condition is also linked to an increased risk of depression.

There is no cure for psoriatic arthritis, but treatment can be very effective in controlling symptoms. The challenge is to diagnose early so treatment can begin as soon as possible.

Painful symptoms are treated with non-steroidal anti-inflammatory drugs such as ibuprofen, but these are generally insufficient to control the arthritis alone.

The clinician may then add a disease modifying anti-rheumatic drug (DMARD). These immunosuppressant drugs aim to control the inflammatory flare ups. Methotrexate is usually used first, while apremilast is an alternative for milder cases.

If these are not sufficient, so-called biological treatments must be used. These target certain inflammation proteins and are often administered via injection using an easy-to-use pen, as diabetics do with insulin. They are generally very effective, well tolerated and have the advantage of easing both joint and skin symptoms. 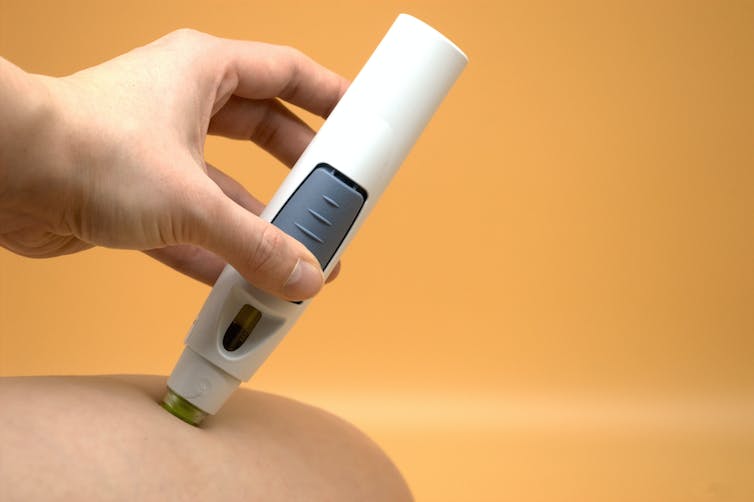 Biological treatments target inflammatory proteins, and can be administered via an autoinjector. www.shutterstock.com

More recently, innovative treatments have been developed that patients take as a tablet, known as JAK inhibitors. These drugs work by blocking a key pathway involved in inflammation.

There is a risk of side effects when using drugs that suppress the immune system. Primarily, they can leave patients more vulnerable to infections.

Read more: What does it mean to be immunocompromised? And why does this increase your risk of coronavirus?

In addition to medication, it’s important for patients to maintain regular physical activity and a balanced diet.

Given the effectiveness of these treatments, the goals of caregivers have also changed. Clinicians are no longer targeting improvement, but remission, where the signs and symptoms are completely resolved.