Certainly, the planned route of the replica HMB Endeavour with 39 stops (and funded at A$6.7 million) could not be described as such: Cook never circumnavigated mainland Australia nor visited Tasmania on the Endeavour.

Morrison quickly clarified that the only gesture of historical accuracy would be a “retracing” of Cook’s voyage up the eastern seaboard.

Historical re-enactments of Cook’s landing are not new to settler Australia. They have focused on Cook’s landfall at Botany Bay, south of Sydney, where the Endeavour’s crew first stepped onto the continent on April 29 1770.

His journal recorded they were greeted by two Dharawal men “who seem’d resolved to oppose our landing”. Cook fired his musket at the men three times, including aiming directly, forcing their retreat.

Cook’s active role in British hostility to Aboriginal peoples was erased from subsequent performances of the Botany Bay landing.

These have also been embellished with Cook claiming the east coast of Australia — this actually occurred some months later at Possession Island in the Torres Strait.

Such popular “re-enactments” of national “foundation moments” have elements of fantasy, compressing time and history into palatable narratives for mainstream Australia.

The history of Cook re-enactments

Cook’s arrival was commemorated as early as 1822, when Sydney’s Philosophical Society erected a plaque at Kurnell, on the headland of Botany Bay. By 1864, the Australian Patriotic Association had located the “exact” site a kilometre away.

In a society eager to erase its convict stain, Cook was a more acceptable founder than Governor Arthur Phillip, who had established the penal colony in Sydney Cove in 1788.

Considerable confusion existed then – and continues today — about the historical roles of Cook and Phillip. Even during the 1888 Centennial of the First Fleet, the largest triumphal arch in Sydney was adorned with Cook’s image and a model of the Endeavour.

The inauguration of the Commonwealth of Australia in January 1901 provided the impetus for a major re-enactment at Kurnell, headlined as the “Second Coming of Cook”. The spectacle attracted a crowd of over 5,000, with 1,000 enjoying a champagne luncheon in an enormous marquee. 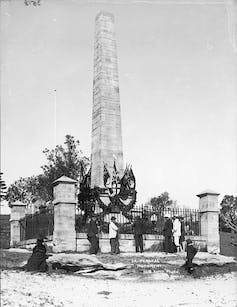 Monument of Captain Cook in Kurnell, Sydney. Museum of Applied Arts and Sciences

The re-enactment began with the arrival of the Endeavour, represented by local fishing vessel “Fanny Fisher”. Once ashore, Cook and his sailors and marines encountered 25 Aboriginal men armed with spears and decorated with feathers and ochre. A gun was fired overhead, then Cook ordered a sailor to shoot at the Aborigines before making his imperial claim on the continent. Cook, Joseph Banks and a nymph symbolising Australia gave speeches on the “greatness” and unity of the Britannia of the Southern Ocean.

Although an Aboriginal community lived at La Perouse on the opposite shore of Botany Bay, the re-enactment involved a troupe of Indigenous men from Queensland. They were directed by parliamentarian and entrepreneur Archibald Meston, who had previously toured Indigenous performers in his “Wild Australia” show.

It is unknown under what circumstances the Aboriginal men were recruited for the Federation re-enactment, or if they were paid. 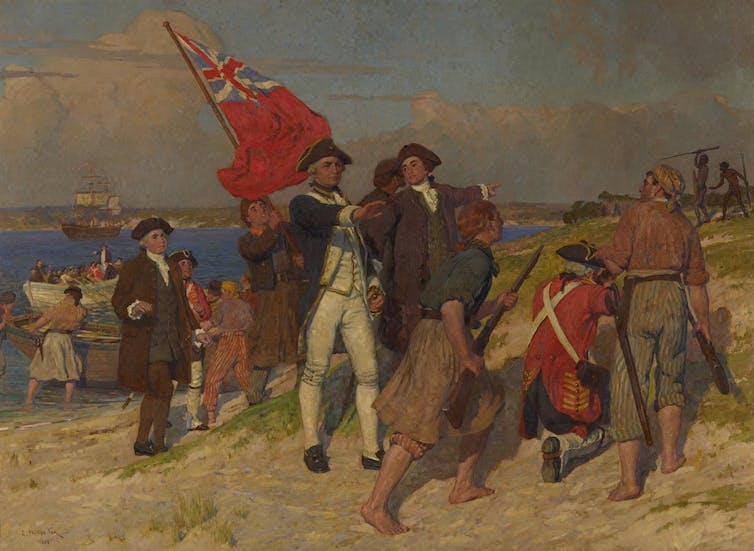 Despite dramatising a beach-side skirmish between the Aborigines and British, the Federation performance cemented Cook as the conquering peacemaker. This was promoted by E. Phillips Fox, who was commissioned by the National Gallery of Victoria to paint The Landing of Captain Cook at Botany Bay, 1770 (1902).

This monumental work is a tableau – or frozen re-enactment — of Cook striding purposefully up the beach, stretching out his hand as he takes territorial possession. It was widely reproduced and circulated, becoming the best-known and influential image of Cook’s landing across Australia.

The evolution of performances

Throughout the first half of the 20th century, the anniversary of the Endeavour’s arrival at Botany Bay was marked by performative gestures to the past. Dignitaries arrived by steamship, coming ashore to give speeches situating Cook as founder of the nation.

For instance, in 1930 at the height of the Depression, spectators were exhorted to “practice self-denial and self-reliance as exemplified in Captain Cook’s exploits”.

Although a full-scale re-enactment was staged in 1951 for the Federation jubilee, interest in Cook waned and the formalities were abandoned.

This changed dramatically in 1970, with the bicentenary of Cook’s Australian landing. Cook was suddenly everywhere, with government funding supporting pageants, memorials and other Cook novelties around the nation.

The nationalistic climax of months of events was an elaborate re-enactment at Kurnell, performed for the visiting Queen Elizabeth and her entourage. Directed by musical theatre aficionado Hayes Gordon, the spectacle was designed for global television, with actors selected after a nationwide search. Held on “Discovery Day”, it attracted a crowd of over 50,000 people. 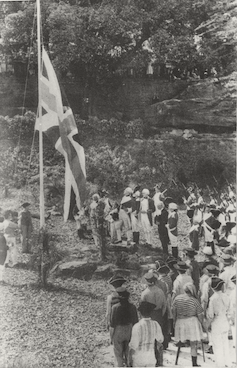 Re-enactment of the first fleet arrival in Domain, Sydney, in 1938. The Royal Botanical Gardens Sydney

Promoted as portraying the “birth of modern Australia”, this re-enactment capitalised on the groundswell of popular interest in Australia’s past. Emphasis was placed on historical accuracy, although nothing challenged the well-established nonsense of Cook’s party briefly confronting Indigenous peoples before peacefully claiming the continent.

To show how far the nation had progressed, “multicultural” schoolchildren and boy scouts and girl guides rose and fell in waves along the beach.

Amid this “celebration”, diverse Aboriginal protests were under way, although they were little covered by the press.

At La Perouse, Aboriginal poet and activist Oodgeroo Noonuccal (Kath Walker) was among hundreds of protesters who boycotted the re-enactment and released funeral wreaths into the sea.

A silent vigil had been held the night before, and a “day of mourning” was observed at Sydney Town Hall and in other Australian cities. 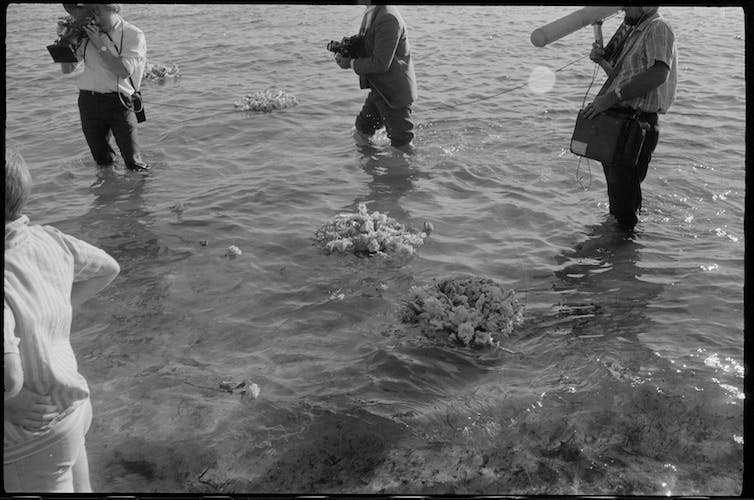 Wreaths thrown into Botany Bay to mark the day of mourning, April 29 1970. Image from the Tribune collection from the 1970 Cook Bicentenary protest, featured in the State Library of NSW's upcoming exhibition, Eight Days in Gamay, opening late April.

In 1970, a second re-enactment was held in Cooktown, also witnessed by the queen. The original Endeavour had spent seven weeks there, undergoing repairs after running into the Great Barrier Reef.

Cooktown has a long record of Cook-related performances, though initially these were sporadic. But from 1960, the Cooktown Re-enactment Association organised an annual event.

The performances evolved from a battle with Aboriginal people to Cook landing and taking possession and, more recently, celebrations of acts of conciliation. 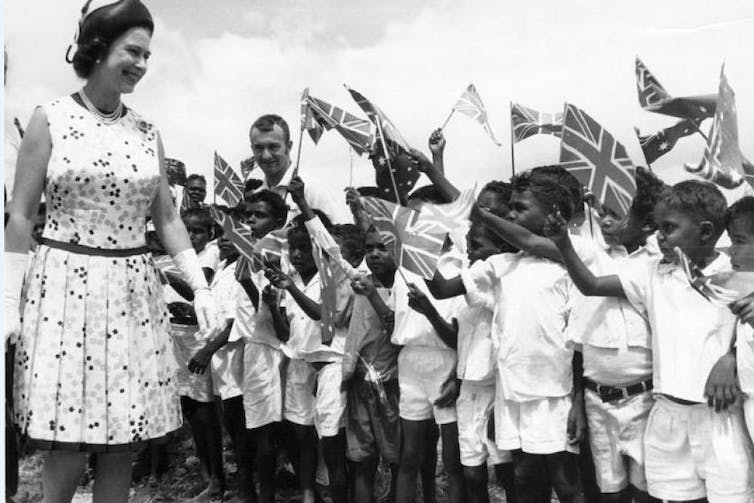 Queen Elizabeth greeted by a group of Indigenous children at a ceremony marking the bicentenary of Cook’s arrival in Cooktown. www.abc.net.au

Until coronavirus and social distancing made all public events impossible, the federal government had slated to spend A$5.45 million on the Cooktown 2020 Expo, including a re-enactment of the landing of Captain Cook and his interactions with the Guugu Yimithirr bama.

As this historical overview of over a century of re-enactments of Cook’s landing has shown, these events have served to reinforce Australia’s imperial and British connections. They ignore the violence of Cook’s encounters with Aboriginal people and Indigenous resistance, and perpetuate the myth of Cook’s discovery of Australia.

You can hear Kate Darian-Smith discussing these ideas in an episode of our podcast, Trust Me, I’m An Expert, over here.