For millions of years, the Murray River has flowed from the Australian Alps across the inland plains, winding through South Australia before emptying into the ocean. But the final leg of its journey once looked vastly different.

Our research released today conclusively shows what has long been suspected: 6,000 years ago, water levels in the Lower Murray River were so high that much of the system in South Australia comprised a huge lake.

We also uncovered an invaluable long-term record of floods and droughts in the Murray Darling Basin, by drilling deep into layers of silt and clay built up over 12,000 years.

The Lower Murray River today and a computer-generated image of what Lake Mannum may have looked like between 5,000 and 8,500 years ago when sea levels were 2 metres higher than they are today. Original photo: Tom Hubble. Modified image: Kathirine Sentas.

Our climate is changing and sea levels are rising. Scientists are working hard to forecast what environments such as rivers and estuaries will look like under higher sea levels and, in Australia, more intense droughts and floods.

One way to do this is to look back to a period 5,000-8,000 years ago, to a point in the sea level cycle known as the Holocene highstand. The Holocene refers to the past 11,700 years or so of Earth’s history. The highstand is the point at which sea levels were highest.

Today, the Murray River crosses into South Australia and flows within a narrow valley, then gradually widens towards Lake Alexandrina where it empties into the sea.

Researchers have previously hypothesised that over several thousand years, the high sea level at the mouth of the Murray acted like a dam, causing water to back up in the river, creating a saltwater lake known as Lake Mannum.

Our research confirms that the lake existed, and that it was enormous - stretching from the mouth of the Murray to about 200 kilometres upstream near Swan Reach.

We used high resolution two- and three-dimensional modelling modelling of water levels and flows to confirm the presence of the lake, and how it formed.

The naturally still waters of Lake Mannum acted as a enormous trap for clay and silt discharged upstream. Under various conditions, such as floods, the sediment travelled downstream and settled to the lake’s floor.

Today, the climate history for the Murray-Darling Basin is written in these sediment layers.

We collected a 30 metre-long sediment core from the present day floodplain of the Lower Murray River.

The core contains an 11-metre section of sediment deposited on the floor of Lake Mannum between 8,500 and 5,000 years ago. Each metre took roughly 315 years to accumulate - about three millimetres a year.

We believe each layer in the core probably represents an episode of increased or decreased river flow.

Longer-term variations in the thickness of the layers may correspond to extended periods of wetter and drier weather.

The next phase of our research will involve a close analysis of the sediment layers to obtain a reliable, detailed, high resolution record of flood and drought in the Murray Darling Basin.

What can we learn?

As sea level dropped to modern levels over the last 5,000 years, the lake slowly drained and turned back into a river.

These days, the lower Murray River is intensively managed. Five barrages, or barriers, have been erected near the river mouth to keep the water fresh by preventing seawater from creeping in, and to maintain water levels. Significant volumes of water have been extracted for irrigation and domestic use.

Some people argue the barrages should be removed to restore the natural tidal estuary and allow sea water to influence lake levels. Their removal is unlikely in the near future. But our research gives insight into what could happen if the barrages were removed, and sea levels rise under climate change. 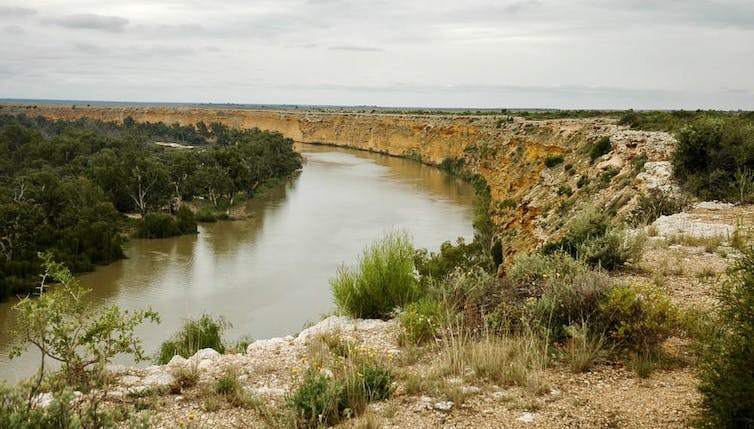 We expect the next step in our research, analysing the sediment cores, to provide valuable data on long-term river flows and indicate whether intense droughts, such as the Millenium drought, are more or less frequent than the once-in-a-century figure often suggested.

In future, water managers deciding on water allocations may benefit from knowing how much water has historically come down the system, and how often.