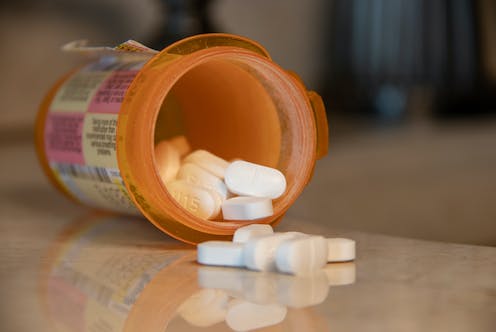 In a single year, extra-medical opioid use caused more than 2,200 deaths, 32,000 hospital admissions and resulted in the loss of over 70,000 years of life in Australia.

“Extra-medical” opioid use includes both the illegal use of opioids such as heroin, and the misuse of pharmaceutical opioids – that is, when they’re not used as prescribed or intended.

In a report released today, we’ve quantified the social costs of pharmaceutical opioid misuse and illicit opioid use in Australia over the financial year 2015-16.

We found extra-medical opioid use came at a cost of an estimated A$15.7 billion.

The scope of the problem

But because of the stigma around opioid use, estimates from national surveys of how many people use extra-medical opioids or how many people would be classified as “dependent” may be underestimates.

We used results from the Global Burden of Disease study to estimate more than 104,000 people in Australia were opioid-dependent in 2015-16, putting them at high risk of harms associated with their drug use.

In 2017, only 28% of opioid deaths involved illicit opioids alone. Some 63% involved pharmaceutical opioids and the remainder involved both.

Let’s break down the costs

Premature deaths accounted for about 80% of the costs of opioids to society, both in tangible and intangible costs.

The intangible cost is the value society is willing to pay to prevent pain and suffering or premature death, which we come to through a variety of modelling techniques.

The tangible costs are the economic contributions the deceased person would have made through employment and unpaid household work, as well as the costs to employers in replacing an employee.

Making up the tangible costs, we also found crime accounted for $940 million, workplace costs such as from absenteeism and injury were $460 million, hospital inpatient care $250 million, and costs to other health services were $830 million.

Typically, economic modelling doesn’t include any “harms” to the consumer, as those harms are part of a rational decision to consume. But for someone who has a drug dependence, that decision may be affected by the dependence and related consequences such as withdrawal.

As including those costs is controversial, we calculated them, but did not add them to our total. Based on data from the Global Burden of Disease study we estimated the value of the lost quality of life for the 104,000 people dependent on opioids at $14.9 billion.

We also looked at lost quality of life for partners and children living with a person dependent on opioids. We calculated there were more than 41,000 adults and 70,000 children living in these households in 2015-16.

Based on research on the impact of living with an alcohol dependent person, we estimated the value of their lost quality of life at $12 billion.

These tentative estimates were also omitted from the overall total.

Since a low point of 529 deaths in 2006, we’ve seen an increasing trend in deaths from extra-medical opioid use in Australia. But recent initiatives could serve to reduce deaths and other costs.

In Australia, “take home naloxone”, a drug that can reverse the effects of an opioid overdose, is increasingly available with support from the federal and state and territory governments.

Read more: How we can reduce dependency on opioid painkillers in rural and regional Australia

While most deaths documented in our report were due to drug toxicity (overdose), liver disease and liver cancer due to hepatitis C virus (HCV) accounted for 39% of extra-medical opioid deaths.

In March 2016, the Pharmaceutical Benefits Scheme subsidised a new treatment for HCV.

This development has the potential to markedly reduce HCV related-disease and death for people dependent on opioids. A study in New South Wales has already noted a significant decline in HCV-related deaths and ill health in a broader population.

Needle and syringe programs remain important in preventing blood borne viruses for people who inject opioids. Along with access to opioid treatment (both pharmacological and psycho-social) these programs are central to our efforts to prevent and reduce opioid-related disease and deaths.

Initial findings are promising but we look forward to evidence about the longer-term effects of this approach.

There’s more we could be doing

There are also other costs we know occurred, but where we can’t attribute a specific amount to opioids, such as efforts at our borders to address drug importation. So overall expenditure is the best approximation rather than a definitive figure.

Social cost studies like this one provide a focus on the overall harms associated with a condition that can drive debate, policy reform and the allocation of health resources.

It’s critical we continue to enhance access to a range of treatments for opioid dependence and continue with other strategies already in place to tackle this tragic loss of life.

In addition, we need to focus on examining the impact of online supply of “counterfeit” and other pharmaceuticals outside of medical regulation, and develop targeted responses where indicated.