When former President Hu Jintao visited Australia in 2003, he began his address to parliament by describing the exploits of a 15th century Chinese admiral, Zheng He:

Back in the 1420s, the expeditionary fleets of China’s Ming Dynasty reached Australian shores … They brought Chinese culture to this land and lived harmoniously with the local people, contributing their proud share to Australia’s economy, society and its thriving pluralistic culture.

This account of explorer Zheng’s voyages has largely been dismissed by western historians.

But it indicates the extent of the regional ambition wrapped up in the Communist Party’s control of history today, including how the Chinese empire once presided over myriad subservient tribute states.

And this is crucial for its promotion of nationalism – an increasingly vital part of the party’s own legitimacy as its economy falters.

Since becoming general secretary of the Communist Party in 2012, President Xi Jinping has emphasised this “rejuvenation” of China, recalling two earlier golden eras during the Tang and High Qing dynasties.

At first, the Ministry of Foreign Affairs largely persisted with the traditional, polite diplomacy that had seen China’s influence grow steadily and quietly, commensurate with its economic heft.

But things changed as Xi’s new team pushed aside officials viewed as corrupt or inadequately responsive to his demands to more forcefully assert China’s rejuvenation, both at home and to the rest of the world.

The Foreign Ministry was losing its influence as Xi’s tight inner circle centralised decision-making. Foreign diplomats came to understand they needed to go to party insiders if they wanted to understand or seek to influence Chinese policies.

A watershed moment came with the blockbuster success of the patriotic, Rambo-style film Wolf Warrior 2 in mid-2017. Its slogan, taken from a Han dynasty saying, is:

Whoever offends China will be punished, no matter how far they are.

At the end of the film, the red cover of a Chinese passport is displayed, accompanied by the message:

Citizens of the PRC: When you encounter danger in a foreign land, do not give up! Please remember, at your back stands a strong motherland.

At the huge exhibition accompanying the 19th party congress a few months later, the foreign ministry proudly exhibited a new hotline system that Chinese people abroad could use to call for help, “no matter how far they are”.

The People’s Liberation Army command was restructured and equipped to project power, including through a blue-water navy and its first overseas base in Djibouti, east Africa.

And Xi ordered massive new resources for diplomacy, doubling the foreign ministry budget from 2013-18, and since then raising it by double digits annually.

Top diplomat Yang Jiechi was also promoted to the Politburo and a new Central Foreign Affairs Commission was established, underlining Xi’s determination to elevate a more assertive foreign policy as a national priority.

China’s international messaging also changed rapidly. At the party to celebrate the 70th anniversary of the Chinese Foreign Ministry last year, Minister Wang Yi urged the country’s envoys to adopt a “fighting spirit” in the face of international challenges.

Although Twitter and Facebook are banned in China, diplomats quickly acquired accounts and followers, and began to use them to hammer the countries where they were posted.

Read more: Murky origins: why China will never welcome a global inquiry into the source of COVID-19

When diplomat Zhao Lijian returned from a posting to Pakistan last year, Reuters reported that “a group of young admirers” at the Foreign Ministry cheered him.

He had catapulted into global attention by labelling the US as racist and in a Twitter spat, telling former National Security Advisor Susan Rice she was “a disgrace” and “shockingly ignorant.”

In January, Zhao was promoted to a Foreign Ministry spokesman, highlighting that his was the path to diplomatic success.

In this new role, Zhao has tweeted to his 623,000 followers that US soldiers brought COVID to Wuhan when competing in the 2019 Military World Games.

He rebuked New Zealand for seeking Taiwan’s readmission to the World Health Organisation’s annual global health assembly, calling on it to

the first time since 1949 that ‘new hawks’ have the power to reshape China’s diplomatic policy.

They have won their spurs by assiduously enlisting the support of countries that have received Chinese development loans to win votes in global bodies.

For instance, when 22 nations, including Australia, urged the UN Human Rights Council to call on China to end its massive detention program of Uyghurs in Xinjiang, Beijing swiftly signed up 37 countries, including many with majority Muslim populations, to defend its rule there. 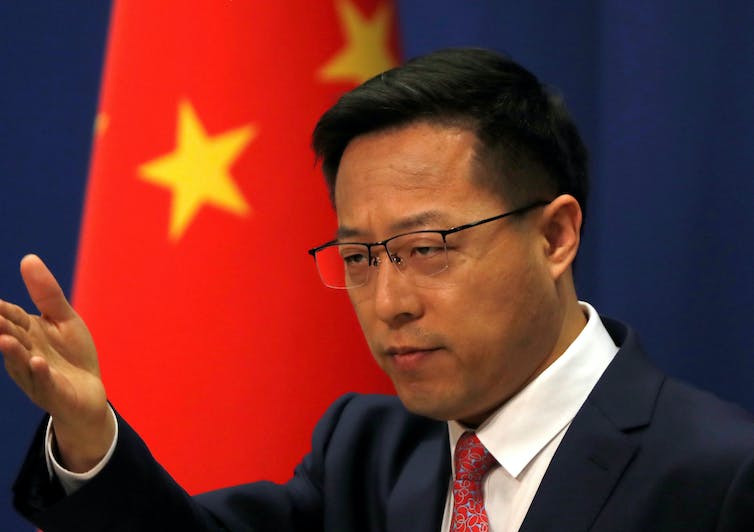 Changing the narrative on coronavirus

The COVID-19 pandemic soon provided those hawks with an even better opportunity to prove their loyalty and value to Xi.

Wu Ken, the ambassador to Germany, provided a handy template to follow in December by warning that if Huawei was excluded from building Germany’s 5G network, “there will be consequences”, and pointing to the importance of China’s market for German cars.

In late January and early February, Xi appeared to be on the back foot as the virus began to erode China’s health and economy, and with it his own previously unquestioned authority.

Read more: How vulnerable is Xi Jinping over coronavirus? In today's China, there are few to hold him to account

But as China began to receive criticism globally for its response to the virus, these newly assertive diplomats swung into action, proving their worth as front-line fighters.

Cheng Jingye, the ambassador to Australia, attacked Canberra’s call for an investigation into the cause of COVID, asking,

Maybe also the ordinary [Chinese] people will say why should we drink Australian wine or to eat Australian beef? 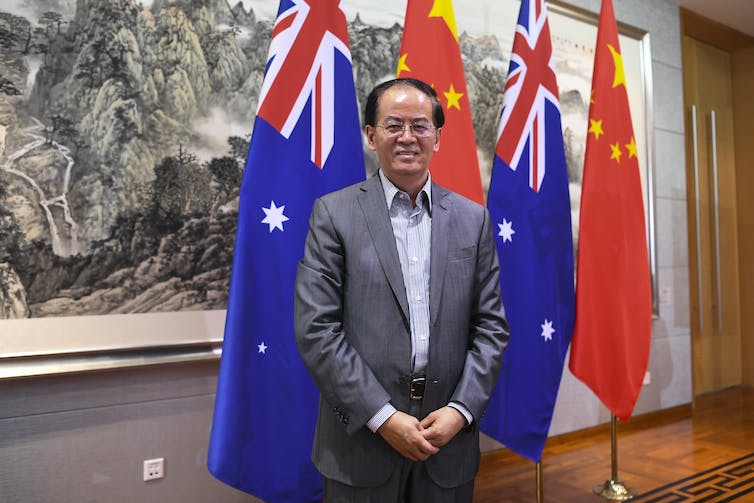 China’s ambassador to Australia, Cheng Jingye. The Chinese embassy mocked Australia’s call for a coronavirus inquiry as ‘nothing but a joke’ this week. Lukas Coch/AAP

Lu Shaye, the ambassador to France, was summoned by the French Foreign Ministry over a post on the embassy website claiming the French were “leaving their residents to die of hunger and disease.”

Politics above all else

This may even come at a cost to China economically. But politics – and especially the push for rejuvenation – is upstream of all else in Xi’s “New Era”.