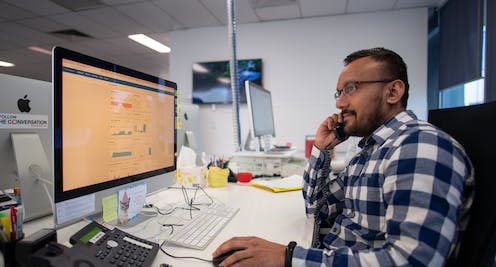 A fortnight ago, two Conversation authors ran the numbers on JobKeeper. They were puzzled at how the government came up with the estimate that 6.6 million workers would get the wage subsidy. Based on the best information they had, Professors Roger Wilkins and Jeff Borland...

A fortnight ago, two Conversation authors ran the numbers on JobKeeper. They were puzzled at how the government came up with the estimate that 6.6 million workers would get the wage subsidy. Based on the best information they had, Professors Roger Wilkins and Jeff Borland wrote that only three million workers would qualify.

This week the federal treasury massively revised the estimated cost of the JobKeeper program and admitted their blunder.

This is where The Conversation is so valuable. Our academic authors provide clarity and insight into the policy and discussions shaping our nation - armed with the latest research and decades of knowledge.

Take Adjunct Associate Professor Karleen Gribble. In November last year, at the height of the bushfire season, Dr Gribble wrote with her colleague Nina Jane Chad on how to evacuate a bushfire with a baby. The story revolved around one central piece of advice: what to put in your emergency kit. The article was shared by the Red Cross, national media and thousands of families during the bushfires. Dr Gribble said:

the most significant impact so far is that VicHealth has now updated its official guidance on emergency kit items for babies – based on our Conversation article.

The Conversation provides a direct line from experts to those who need expertise. You get to see the ideas before they’re part of a broader public discussion. In Dr Nicole Lee’s case a Conversation article led to changes in the law:

After a series of Conversation articles on methamphetamine, a large NGO invited me to help them and Vietnam’s government develop a new approach on drug treatment. I met with government officials, who signed a memorandum of understanding about changing their laws. Now there will be more interventions to help people, rather than just putting them in detention centres.

These types of stories are common. In the past year, The Conversation Australia published more than 3,700 authors. Of these, 66% were contacted by media for follow up, including interviews on TV, radio, online or print.

Some 9% were contacted by government, 22% were invited to speak at conferences or contacted for research collaboration, and 14% were approached for business consultation.

The Conversation isn’t just a news site. We care less about clicks than we do about making a real difference, and that’s why we need your help. A donation from a reader like you can help create more impact. If you’re able, please give a one-off or monthly donation – it’s a direct investment in experts and the impact their trusted knowledge can have on society.