The COVID-19 outbreak has put into stark relief the disruption parasites can cause, both in human society and ecosystems.

Researchers have long sought to better understand the evolutionary importance of parasites, to help lessen their impact.

Although parasites are common in modern ecosystems, we actually know little about parasitism in the distant past. And when parasites first evolved remains a mystery.

But our research, published today in Nature Communications, brings us one step closer to an answer, as we document the oldest known example of a parasite-host relationship.

This clip provides a 3D rendering of what brachiopods may have looked like on the seafloor.

The tricky task of identifying parasitism

Parasitism is typically defined as an ongoing relationship in which one organism, the parasite, increases its own success by exploiting another organism known as the host.

Importantly, parasitism is a form of symbiosis. Symbioses are commonly thought of as positive partnerships. For instance, the relationship between coral polyps and microscopic algae that is crucial to the formation of coral reefs benefits both organisms.

However, the term symbiosis can be applied to any persistent relationship between organisms. In the case of parasitism, the parasite always benefits while the host is harmed.

This definition of parasitism is perhaps one of the reasons why the history of parasites remains relatively unknown.

Read more: Why evolution must be at the centre of fighting parasitic infections

Much of our understanding of the evolution of life comes from the fossil record. And although fossils provide abundant evidence of evolutionary and ecological change, evidence of direct interaction between fossil organisms is less likely to be preserved. It’s often difficult to demonstrate a suspected fossil parasite was actually exploiting a host.

Also, many parasites that live inside a host – including bacteria and viruses – are unlikely to be fossilised as they often decompose too quickly to be preserved.

The origins of parasitism

Despite these issues, there are demonstrated examples of fossil parasites.

And our latest findings have identified the earliest parasite-host interaction in the fossil record.

We examined exquisitely preserved, 515-million-year-old fossils from southern China belonging to organisms called brachiopods (Neobolus wulongqingensis). Brachiopods are marine invertebrates that resemble clams but are actually quite different. They are rare today, but were much more common in the geological past.

Our research revealed the hardened tubes encrusting the surface of fossil brachiopod shells were once occupied by parasitic worms. 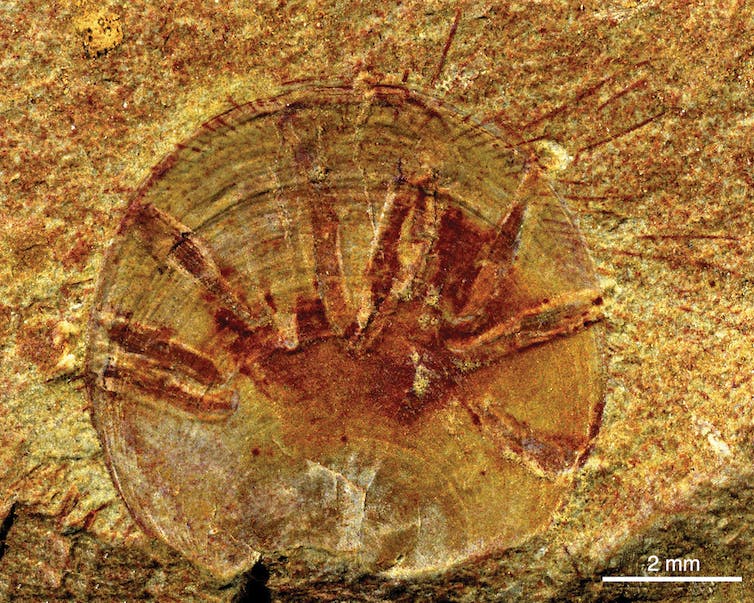 Fossil of brachiopod shell (Neobolus wulongqingensis). The tubes on the shell surface would have been occupied by parasitic worms.

We know the worms were parasites because we identified a clear negative effect on the host, as brachiopods without parasites grew larger than those with them.

While the parasites in question were almost certainly worms, we don’t know exactly what type of worm. What we do know is the worm would have been attached to its host brachiopod for its entire life.

Based on the orientation of the tubes, we also know the worms were kleptoparasites, meaning they stole food from the host before it could be ingested. 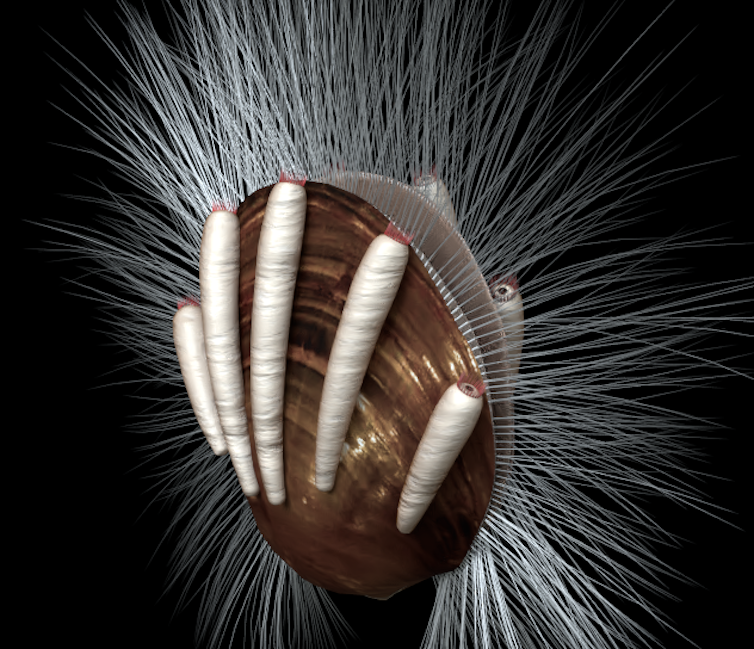 A reconstruction of Neobolus wulongqingensis with parasites on the surface of the shell.

Other remarkable discoveries of parasites in the fossil record include spiral-shaped bacteria, almost identical to the bacteria responsible for Lyme Disease, discovered inside a 15 million-year-old fossil tick entombed in amber.

“Tongue worms” (Pentastomida), a parasite still found today, have a fossil record stretching back hundreds of millions of years. We even have evidence of damage to dinosaur feathers caused by lice.

An explosive period of evolution

The age of these newly discovered fossil parasites coincides with what is known as the Cambrian Explosion.

This event began roughly 540 million years ago during the Cambrian Period. It was a time of rapid evolutionary change, and includes the first appearance of animals with eyes, organs and limbs.

These changes had a marked affect on how organisms interact with each other. For example, active predation is thought to have first begun during this time.

Our discovery indicates parasitism is perhaps another important biological interaction that arose during this critical event.

The importance of understanding the history of parasites

Determining when parasites may have first evolved is the first step in understanding their impact on the history of life.

Many questions still remain. Perhaps the most important is how parasitism first evolved.

Some modern parasites exploit multiple hosts throughout their life. And many parasites that live inside a host are capable of surviving without a host at least part of the time. This suggests the first parasites may not have needed to rely on a single host for survival.

We know parasitism has evolved multiple times, and almost every animal group includes one or more parasites.

There are even parasitic mammals. For instance, vampire bats are considered a type of parasite. Transitioning to becoming a parasite seems to be a ubiquitous evolutionary strategy.

Parasites may have also driven major changes in evolution. The origin of sexual reproduction has been connected to the need for host organisms to develop greater resistance to parasites. Parasites also dominate food web links. In fact, parasitism may be the most common consumer strategy in modern food webs.

Nonetheless, we still don’t know how common parasites were in the past, or what innovations in life’s history occurred due to biological pressures exerted by parasites.

Because of this, identifying if parasitism is the cause of major evolutionary changes remains an ongoing challenge.

Read more: Bites and parasites: vector-borne diseases and the bugs spreading them