Pacific nations have largely avoided the worst health effects of COVID-19, but its economic impact has been devastating. With the tourism tap turned off, unemployment has soared while GDP has plummeted.

In recent weeks, Fiji Airways laid off 775 employees and souvenir business Jack’s of Fiji laid off 500. In Vanuatu 70%...

Pacific nations have largely avoided the worst health effects of COVID-19, but its economic impact has been devastating. With the tourism tap turned off, unemployment has soared while GDP has plummeted.

In recent weeks, Fiji Airways laid off 775 employees and souvenir business Jack’s of Fiji laid off 500. In Vanuatu 70% of tourism workers have lost their jobs. Cook Islands is estimated to have experienced a 60% drop in GDP in the past three months.

In response, many are calling for the Pacific to be included in the proposed trans-Tasman travel corridor. Such calls have come from tourism operators, politicians and at least one health expert.

Quarantine concerns aside, there is economic logic to this. Australians and New Zealanders make up more than 50% of travellers to the region. Some countries are massively dependent: two-thirds of visitors to Fiji and three-quarters of visitors to Cook Islands are Aussies and Kiwis.

Read more: A four-day working week could be the shot in the arm post-coronavirus tourism needs

Cook Islands has budgeted NZ$140 million for economic recovery, but this will increase the tiny nation’s debt. Prime Minister Henry Puna has argued for a limited tourism bubble as soon as New Zealand relaxes its COVID-19 restrictions to alert level 1. Cook Islands News editor Jonathan Milne estimates 75-80% of the population is “desperate to get the tourists back”. 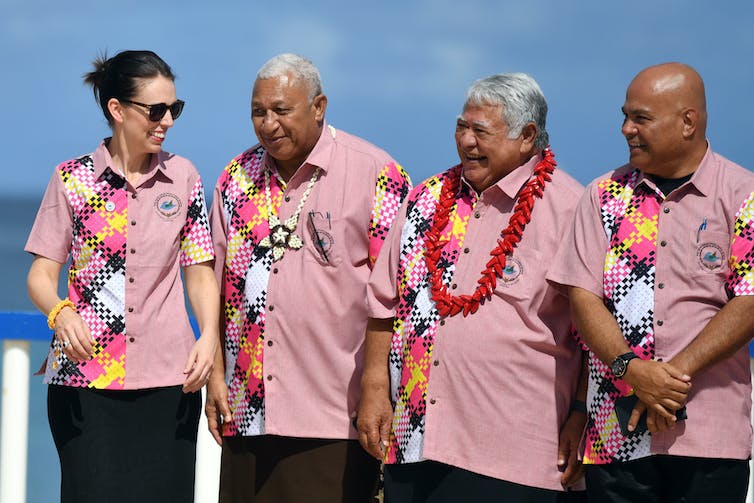 New Zealand Prime Minister Jacinda Ardern with the leaders of Fiji, Samoa and Federated States of Micronesia at the 2019 Pacific Islands Forum in Tuvalu. AAP/Mick Tsikas

A Pacific bubble would undoubtedly help economic recovery. But this merely highlights how vulnerable these island economies have become. Tourism accounts for between 10% and 70% of GDP and up to one in four jobs across the South Pacific.

The pressure to reopen borders is understandable. But we argue that a tourism bubble cannot be looked at in isolation. It should be part of a broader strategy to diversify economies and enhance linkages (e.g. between agriculture and tourism, to put more local food on restaurant menus), especially in those countries that are most perilously dependent on tourism.

Over-dependence on tourism is a trap

Pacific nations such as Vanuatu and Fiji have recovered quickly from past crises such as the GFC, cyclones and coups because of the continuity of tourism. COVID-19 has turned that upside down.

People are coping in the short term by reviving subsistence farming, fishing and bartering for goods and services. Many are still suffering, however, due to limited state welfare systems.

In Fiji’s case, the government has taken the drastic step of allowing laid-off or temporarily unemployed workers to withdraw from their superannuation savings in the National Provident Fund. Retirement funds have also been used to lend FJ$53.6 million to the struggling national carrier, Fiji Airways.

Read more: Holidaying in a disaster zone isn't as crazy as it might seem

Fiji has taken on more debt to cope. Its debt-to-GDP ratio, which ideally should sit below 40% for developing economies, has risen from 48.9% before the pandemic to 60.9%. It’s likely to increase further.

High debt, lack of economic diversity and dependence on tourism put the Fijian economy in a very vulnerable position. Recovery will take a long time, probably requiring assistance from the country’s main trading partners. In the meantime, Fiji is pinning hopes on joining a New Zealand-Australia travel bubble. 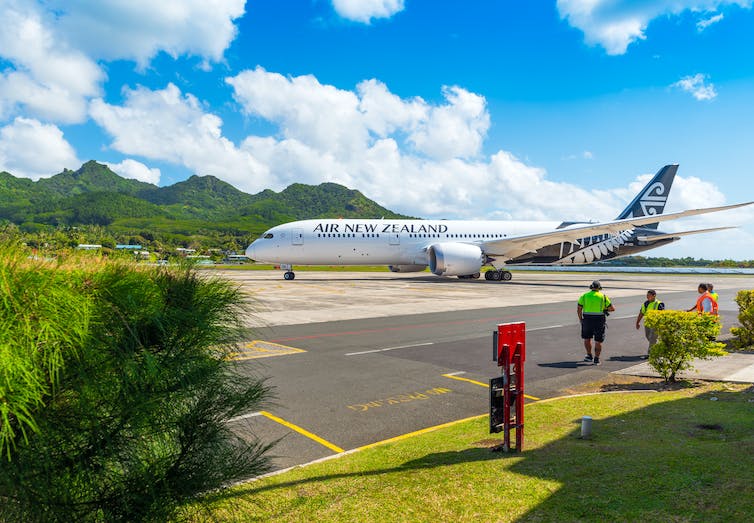 Out of crisis comes opportunity

Supporting Pacific states to recover is an opportunity for New Zealand and Australia to put their respective Pacific Reset and Step-Up policies into practice. If building more reciprocal, equitable relationships with Pacific states is the goal, now is the time to ensure economic recovery also strengthens their socio-economic, environmental and political infrastructures.

Economic well-being within the Pacific region is already closely linked to New Zealand and Australia through seasonal workers in horticulture and viticulture, remittance payments, trade and travel. But for many years there has been a major trade imbalance in favour of New Zealand and Australia. Shifting that balance beyond the recovery phase will involve facilitating long-term resilience and sustainable development in the region.

A good place to start would be the recent United Nations Economic and Social Commission for Asia and the Pacific report on recovering from COVID-19. Its recommendations include such measures as implementing social protection programs, integrating climate action into plans to revive economies, and encouraging more socially and environmentally responsible businesses.

This is about more than altruism – enlightened self-interest should also drive the New Zealand and Australian agenda. Any longer-term economic downturn in the South Pacific, due in part to over-reliance on tourism, could lead to instability in the region. There is a clear link between serious economic crises and social unrest.

At a broader level, the pandemic is already entrenching Chinese regional influence: loans from China make up 62% of Tonga’s total foreign borrowing; for Vanuatu the figure is 43%; for Samoa 39%.

China is taking the initiative through what some call “COVID-19 diplomacy”. This involves funding pandemic stimulus packages and offering aid and investment throughout the Pacific, including drafting a free trade agreement with Fiji.

That is not to say Chinese investment in Pacific economies won’t do good. Rather, it is an argument for thinking beyond the immediate benefits of a travel bubble. By realigning their development priorities, Australia and New Zealand can help the Pacific build a better, more sustainable future.