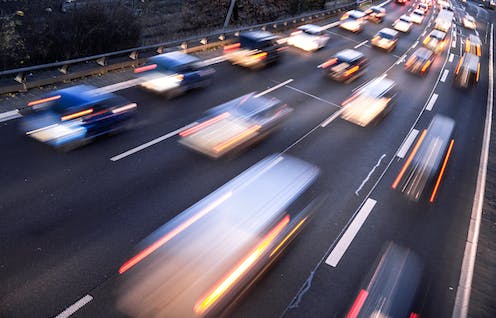 Climate Explained is a collaboration between The Conversation, Stuff and the New Zealand Science Media Centre to answer your questions about climate change.

If you have a question you’d like an expert to answer, please send it to climate.change@stuff.co.nz

Does reducing speed reduce emissions from the average car?

CC BY-ND Climate Explained is a collaboration between The Conversation, Stuff and the New Zealand Science Media Centre to answer your questions about climate change. If you have a question you’d like an expert to answer, please send it to climate.change@stuff.co.nz Does reducing speed reduce emissions from the average car? Every car has an optimal speed range that results in minimum fuel consumption, but this range differs between vehicle types, design and age. Typically it looks like this graph below: fuel consumption rises from about 80km/h, partly because air resistance increases. 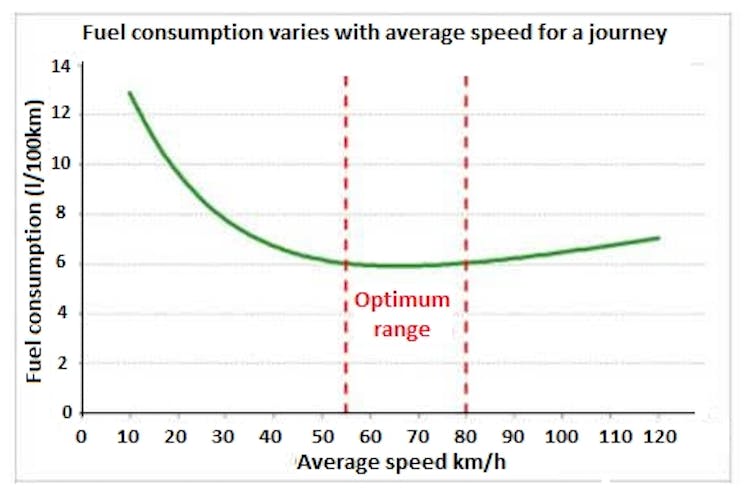 Author provided But speed is only one factor. No matter what car you are driving, you can reduce fuel consumption (and therefore emissions) by driving more smoothly. This includes anticipating corners and avoiding sudden braking, taking the foot off the accelerator just before reaching the peak of a hill and cruising over it, and removing roof racks or bull bars and heavier items from inside when they are not needed to make the car lighter and more streamlined. Read more: Climate explained: the environmental footprint of electric versus fossil cars Driving wisely In New Zealand, EnergyWise rallies used to be run over a 1200km course around the North Island. They were designed to demonstrate how much fuel could be saved through good driving habits. The competing drivers had to reach each destination within a certain time period. Cruising too slowly at 60-70km/h on straight roads in a 100km/h zone just to save fuel was not an option (also because driving too slowly on open roads can contribute to accidents). The optimum average speed (for both professional and average drivers) was typically around 80km/h. The key to saving fuel was driving smoothly. In the first rally in 2002, the Massey University entry was a brand new diesel-fuelled Volkswagen Golf (kindly loaned by VW NZ), running on 100% biodiesel made from waste animal fat (as Z Energy has been producing). A car running on fossil diesel emits about 2.7kg of carbon dioxide per litre and a petrol car produces 2.3kg per litre. Using biofuels to displace diesel or petrol can reduce emissions by up to 90% per kilometre if the biofuel is made from animal fat from a meat works. The amount varies depending on the source of the biofuel (sugarcane, wheat, oilseed rape). And of course it would be unacceptable if biofuel crops were replacing food crops or forests. Regardless of the car, drivers can reduce fuel consumption by 15-20% by improving driving habits alone – reducing emissions and saving money at the same time. Read more: Climate explained: what each of us can do to reduce our carbon footprint Fuel efficiency When you are thinking of replacing your car, taking into account fuel efficiency is another important way to save on fuel costs and reduce emissions. Many countries, including the US, Japan, China and nations within the European Union, have had fuel efficiency standards for more than a decade. This has driven car manufacturers to design ever more fuel-efficient vehicles. Most light-duty vehicles sold globally are subject to these standards. But Australia and New Zealand have both dragged the chain in this regard, partly because most vehicles are imported. Read more: Australians could have saved over $1 billion in fuel if car emissions standards were introduced 3 years ago New Zealand also remains hesitant about introducing a “feebate” scheme, which proposes a fee on imported high-emission cars to make imported hybrids, electric cars and other efficient vehicles cheaper with a subsidy. In New Zealand, driving an electric car results in low emissions because electricity generation is 85% renewable. In Australia, which still relies on coal-fired power, electric cars are responsible for higher emissions unless they are recharged through a local renewable electricity supply. Fuel and electricity prices will inevitably rise. But whether we drive a petrol or electric car, we can all shield ourselves from some of those future price rises by driving more efficiently and less speedily. Read more: Climate explained: why switching to electric transport makes sense even if electricity is not fully renewable