In recent weeks, the world has looked on as governments use chemical irritants to control protesters and riots. Whether it’s tear gas, pepper spray, mace or pepper balls, all have one thing in common: they’re chemical weapons.

The next day, tear gas was used to break up a fight at Long Bay jail, as prison guards filled an exercise yard with tear gas canisters – also impacting nearby residents.

These events followed the deployment of chemical riot control agents – specifically “pepper bombs” – in Washington DC last week. They were used to clear protesters from a public park so President Donald Trump could walk from the White House to a nearby church for a photo opportunity.

US Attorney General William Barr said “there was no tear gas used”, claiming “pepper spray is not a chemical irritant. It’s not chemical.”

I’m a chemical engineer and chemist who studies chemicals in the environment. So I thought I’d clear the air about what makes pepper spray such a powerful chemical irritant, and a chemical weapon.

The active compounds in pepper spray are collectively known as capsaicinoids. They are given the military symbol OC, for “oleoresin capsicum”.

The most important chemical in OC is capsaicin. This is derived from chilli peppers in a chemical process that dissolves and concentrates it into a liquid. Capsaicin is the same compound that makes chillies hot, but in an intense, weaponised form.

Not all capsaicinoids are obtained naturally. One called nonivamide (also known as PAVA or pelargonic acid vanillylamide) is mostly made by humans. PAVA is an intense irritant used in artificial pepper spray. 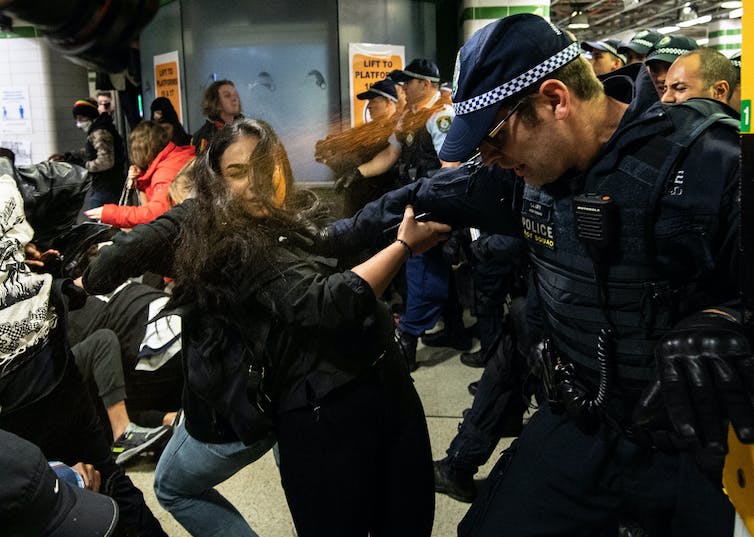 Is pepper spray a tear gas?

We’ve established pepper spray is a chemical, but is it also a kind of tear gas?

“Tear gas” is an informal term and a bit of a misnomer, because it isn’t a gas. Rather, tear gas refers to any weaponised irritant used to immobilise people.

More specifically, tear gas is often used to describe weapons that disperse their irritants in the air either as liquid aerosol droplets (such as gas canisters), or as a powder (such as pepper balls). This definition distinguishes tear gas from personal self-defence sprays which use foams, gels and liquids.

Read more: What is tear gas?

Tear gas canisters typically contain the irritants 2-chlorobenzalmalononitrile (CS) and phenacyl chloride (CN). Both CS and CN are man-made chemicals discovered in a lab, unlike capsaicin (the traditional ingredient in pepper spray).

But despite capsaicin coming from chilli peppers, pepper spray is still a weaponised irritant that can be delivered as an aerosol or powder. It should unequivocally be considered a type of tear gas.

Pepper spray as a weapon

Pepper spray works almost instantly, forcing the eyes to close and flood with tears. Coupled with coughing fits and difficulty breathing, this means the targeted person is effectively blinded and incapacitated. Because lachrymatory agents work on nerve receptors that help us sense heat, they also induce an intense burning sensation.

The combined effects of pepper spray can last anywhere from 15 minutes to more than an hour.

Lachrymatory agents emerged on the battlefields of World War I. Artillery shells were filled with chemicals such as xylyl bromide and chloroacetone and fired at enemy soldiers. Agents that induce choking, blistering and vomiting were added as the chemical arms race escalated.

Read more: Tear gas and pepper spray are chemical weapons. So, why can police use them?

In the 1920s, the Geneva Protocol was enacted to ban the use of indiscriminate and often ineffective chemical weapons on the battlefield. Today, the unjustified use of chemical riot control agents threatens to erode the systems that are meant to protect us from the most dangerous weaponised chemicals.