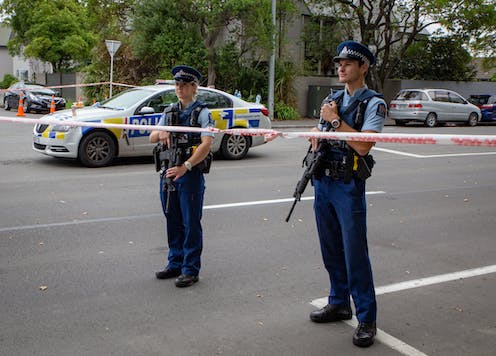 The recent killing of a police officer and the wounding of his colleague in West Auckland will inevitably change police attitudes to their jobs.

Firstly, it will affect how they interact with the public. Such tragedies offer a direct challenge to the democratic conventions of policing in New Zealand, particularly the important idea of policing by consent.

Secondly, the death of Constable Matthew Hunt will inevitably lead to a reexamination of police firearm policies.

And finally, the incident will change the way police officers perceive risk and read risk factors during routine vehicle stops.

As ever when an officer is killed in the line of duty, the debate over permanently arming front-line police resurfaces. While patrol vehicles carry firearms in New Zealand, these are not routinely worn by officers.

Surprisingly, though, there is little international research comparing the nature of routinely armed and routinely unarmed policing.

One study of the temporary arming of Norwegian police suggested there is genuine mental strain associated with not carrying firearms. Officers reported being worried about the risks of unexpectedly confronting dangerous situations. They also said this negatively affected their ability to formulate effective tactical plans.

This doesn’t necessarily represent a universal desire to be armed, however. During my earlier research into the Norwegian Police in 2011, one officer told me he preferred to remain routinely unarmed due to a previous encounter with an armed offender. His life had been spared, he suggested, precisely because he was not carrying a firearm.

This perspective was shared by many of my colleagues during my time on the front-line. But recent officer surveys have shown an increasing preference over time for routine arming. This latest death will not alter that.

Read more: Defunding the police could bring positive change in Australia. These communities are showing the way

Would Armed Response Teams have made a difference?

The death of Constable Matthew Hunt came only weeks after the Armed Response Team (ART) trial was abandoned, so it is reasonable to ask whether this would have made a difference.

Given the Auckland incident has been described as a routine vehicle stop, however, and unless it had been an ART unit that made the original stop, it seems unlikely such a deployment would have changed anything.

Until more detail is available it is impossible to estimate whether the deployment of an ART vehicle would have reduced callout times compared with the conventional Armed Offender Squad units that did respond.

Trust in the public will decline

As a former constable and sergeant with New Zealand Police, I know firsthand how police fatalities shape one’s behaviour. The 2002 shooting of Detective Constable Duncan Taylor changed my awareness of personal safety and was always in the back of my mind during my operational policing career.

The deaths of another three officers in 2008 and 2009 markedly affected my risk perception. When my colleague Sergeant Derek Wootton was killed it raised my awareness of the risks of deploying road spikes when apprehending fleeing drivers. And the deaths of Senior Constable Len Snee and Sergeant Don Wilkinson reinforced the need for adequate firearms on police operations.

These deaths not only shaped my perception of risk, they affected the trust I had in others when assessing my own safety.

Perception of risk will change

Beyond questions of trust, the Auckland incident will shape both formal and informal practice and policy. Police training will include lessons from the incident. Just as importantly, individual officers’ subjective perception of risk and how it affects their decisions will change.

Research confirms it is the perceived level of threat that informs decision making. Studies of officer risk assessment during police vehicle stops show the importance of environmental and social factors.

Unarmed English officers treated traffic stops quite differently to those from Venezuela – perhaps not surprisingly, since the latter were accustomed to having grenades thrown in their direction.

In short, officers perceive risk based on their personal experience and exposure to resistance.

Apprehension and arrest are inherently dangerous

The Auckland incident again highlights the difficulty associated with one of the most dangerous aspects of police work.

My research into front-line policing in New Zealand and South Australia revealed the real danger for officers during the live investigation phase of police encounters, such as responding to family violence incidents or stopping vehicles.

Apprehending someone involves the most frequent use (and longest duration) of physical control behaviours. Officers can employ verbal control techniques – questioning, directions or commands – but there is no getting away from the fact that arrest requires the physical custody of a person.

While police might expect resistance, they trust that citizens will ultimately consent to their actions and that their lives will not be placed in jeopardy.

This latest police death will naturally cause many in the police to question that trust. The challenge for policy makers will be to balance the desirable elements of New Zealand policing with the practical need to ensure officer safety.