In a deadly game of Middle East cat and mouse, Israel Prime Minister Benjamin Netanyahu is continuing to weigh his options in pushing ahead with plans to extend Israeli sovereignty over territories occupied by Israel in the 1967 war.

This is a highly complex issue involving multiple calculations, diplomatic and otherwise.

Complicating things from Netanyahu’s standpoint are reservations expressed by coalition partner Benny Gantz, the alternative prime minister under a power-sharing arrangement that would see Gantz take over in less than 18 months.

Gantz has said that implementing annexation proposals are not “sacred” or urgent.

Read more: What constitutes fair and unfair criticism of Israel?

Washington is also reported to be cool on an idea that would endanger relations with America’s moderate Sunni allies across the Middle East, and risk unrest in neighbouring Jordan.

Jordan’s King Abdullah has been at the forefront of warnings about the consequences of annexation. A majority of Jordanians are of Palestinian origin.

In all of this, the position of President Donald Trump remains an unpredictable element, particularly in an election year in which the votes of an evangelical base are critical to his survival. The evangelical movement is biblically committed to Israel.

In January, the Trump administration unveiled what it described as the “deal of the century”. This is the long-waited Middle East peace plan under which one-third of the West Bank would remain under permanent Israeli control.

Needless to say, the Palestinians rejected the so-called “deal of the century” outright. 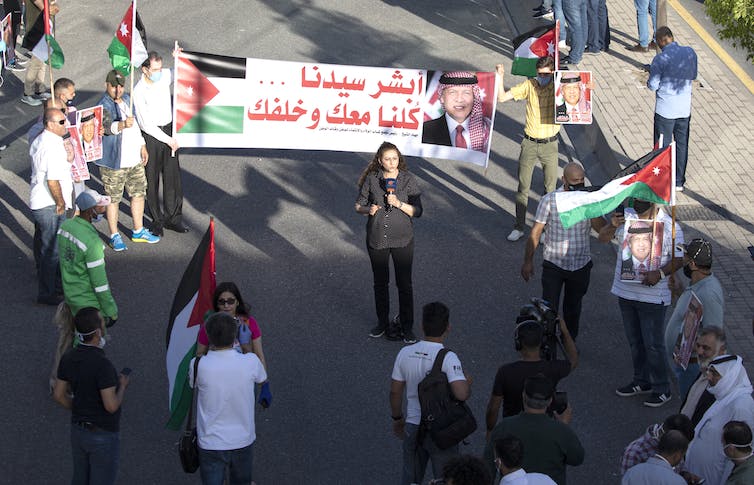 A protest in Jordan against Israel’s plans to annex parts of the West Bank and Jordan Valley. ANDRE PAIN/EPA

July 1 is the notional date on which Netanyahu could begin to unveil his proposals for what would, arguably, be the most contentious move of his lengthy premiership.

If Israel’s leader elects to annex a maximalist 30% of the West Bank and tighten Israel’s grip on the Jordan Valley, he will invite a strong diplomatic push-back internationally.

Another option would be for him to simply incorporate the major West Bank settlement blocs into Israel. This would amount to around 3% of West Bank territory. Such a move is described as a minimalist option.

Either way, Netanyahu would encounter widespread censure. Four of the five permanent members of the UN Security Council have spoken out against an extension of Israeli sovereignty over what is deemed Palestinian territory under international law.

UN officials led by Secretary General Antonio Guterres have been at the forefront of criticism of Israel’s proposed action.

On Monday, Michelle Bachelet, top UN official at the Human Rights Council could not have been more explicit in a prepared statement:

Annexation is illegal. Period. I am deeply concerned that even the most minimalist form of annexation would lead to increased violence and loss of life, as walls are erected, security forced deployed and the two populations brought into closer proximity.

Charges of a new form of apartheid

Whether Israel elects to follow maximalist or minimalist approaches to annexation, or something in between, the result would further complicate efforts to bring about a just peace between Israelis and Palestinians based on a land-for-peace formula.

The Middle East peace process may be a dead letter under present circumstances, given the unwillingness of both sides to negotiate in good faith.

However, this does not mean that negotiations on a two-state solution will be off the table indefinitely. Who knows what the future holds for the most vexed issue in international diplomacy?

Read more: Palestinians will never be convinced a deal with Israel is worth making if annexation is packaged as peace

What is irrefutable is that if annexation proceeds, thereby reinforcing a Swiss-cheese pockmarking of the West Bank between Palestinian towns and villages and Israeli settlements, Palestinians will find themselves living increasingly in what could be described as Bantustans, the homelands set up by the apartheid-era government in South Africa for the black population.

These enclaves would be cut off from each other, thus adding further to a Palestinian sense of grievance and dislocation under an Israeli occupation that has lasted for more than half a century.

Annexation would also invite allegations Israel was exercising a form of apartheid under which it controlled an Arab population without voting or other rights available to Israelis.

The charge of apartheid is being heard more frequently from Israeli’s critics. These criticisms would intensify if annexation proceeds, either on a minimalist or maximalist basis. 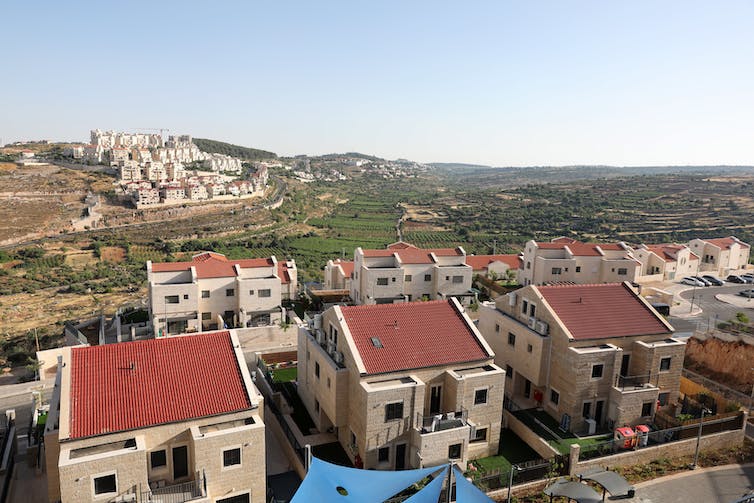 The Israeli settlement of Efrat in the West Bank. ABIR SULTAN/EPA

International support for Israel’s position on annexation is sparse and restricted for the most part to the US evangelical movement, pro-settlement advocates in the Jewish community in America and nationalist leaders like Hungary’s Viktor Orban.

The international media has been excoriating in its criticisms of Netanyahu’s annexation proposals.

In an editorial last month, the New York Times wrote,

The annexation would render the West Bank into a patchwork of simmering, unstable Bantustans, forever threatening a new intifada. […] It may de-stabilise Jordan, a country where Palestinians form the majority, and it could strain Israel’s new ties with Sunni Arab states.

Many Israelis may consider annexation a victory, but the destruction of Palestinian hopes for a just settlement with the Jewish state will store up bigger problems for the future. […] If the outside world allows Mr Netanyahu to go ahead with his plans, it will bear some responsibility for the consequences. It is time for a diplomatic tsunami.

A diplomatic tsunami is yet to materialise in an environment in which the international community is overwhelmed by a health pandemic. However, this is not to say unilateral Israeli action would not have consequences for the Jewish state.

Among those consequences would likely be a step back in its efforts to establish better working relations with Sunni Arab states in the Persian Gulf threatened by Iran.

Peace treaties with Egypt and Jordan may be called into question.

Imposition of sanctions on Israel could not be excluded.

Unrest in the West Bank and the Gaza Strip may well erupt.

From the standpoint of a nationalist leader like Netanyahu, on the other hand, there may not be a more opportune moment to extend Israeli sovereignty over what pro-settlement Israelis refer to as Judea and Samaria as part of “Greater Israel”.

Weighing heavily in his calculations is a potentially limited window of opportunity to cement his legacy as the leader who imposed Israeli sovereignty over territory between the Mediterranean and the Jordan River.

Netanyahu would also be mindful of opinion polls in America that indicate Trump’s re-election prospects are hanging by a thread. Israel will not have a more sympathetic president in the White House than the incumbent.

Democratic challenger Joe Biden has said he is opposed to annexation.