Emerging infectious diseases, including COVID-19, usually come from non-human animals. However our understanding of most animals’ immune systems is sadly lacking as there’s a shortfall in research tools for species other than humans and mice.

Our research published today in Science Advances details cutting edge immunology tools we developed to understand cancer in Tasmanian devils. Importantly, these tools can be rapidly modified for use on any animal species.

Our work will help future wildlife conservation efforts, as well as preparedness against potential new diseases in humans.

The fall of the devil

A decade after it was discovered, genetic analysis revealed DFT cells are transmitted between devils, usually when they bite each other during mating. A second type of transmissible devil facial tumour (DFT2) was detected in 2014, suggesting devils are prone to developing contagious cancers. 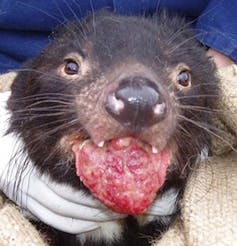 A Tasmanian devil with devil facial tumour disease. Save the Tasmanian Devil Program

In 2016, researchers reported some wild devils had natural immune responses against DFT1 cancers. A year later an experimental vaccine for the original devil facial tumour (DFT1) was tested in devils artificially inoculated with cancer cells.

While the vaccine didn’t protect them, in some cases subsequent treatments were able to induce tumour regression.

But despite the promising results, and other good news from the field, DFT1 continues to suppress devil populations across most of Tasmania. And DFT2 poses an additional threat.

In humans, there has been incredible progress in treatments targeting protein that regulate our immune system. These treatments work by stimulating the immune system to kill cancer cells.

Our team’s analyses of devil DNA showed these immune genes are also present in devils, meaning we may be able to develop similar treatments to stimulate the devil immune system.

But studying the DNA blueprint for devils takes us only so far. To build a strong house, you need to understand the blueprint and have the right tools. Proteins are the building blocks of life. So to build effective treatments and vaccines for devils we have to study the proteins in their immune system.

Until recently, there were few research tools available for this. And this problem was all too familiar to researchers studying immunology and disease in species other than humans, mice or rats.

Into the FAST lane

You could build a house with just a saw, hammer and nails – but a better and faster build requires a larger, more versatile toolbox.

In our new research, we’ve added more than a dozen tools to the toolbox for understanding tumours in Tasmanian devils. These are Fluorescent Adaptable Simple Theranostic proteins – or simply, FAST proteins.

The term “theranostic” merges therapeutic and diagnostic. FAST proteins can be used as a therapeutic drug to treat a disease, or as a diagnostic tool to determine its cause and better understand it.

A key feature of FAST proteins is they can be tagged with a fluorescent protein marker, and can be released from the cells that we engineered in the lab to make them.

This way, we can collect and observe how the proteins attach and interact with other proteins without needing to add a tag later in the process.

To understand this, imagine trying to use a tiny key in a tiny lock in the dark. It would be difficult, but much easier if both were tagged with a coloured light. In the context of the immune system, it’s easier to understand what we need to turn on or off if we can see where the proteins are.

By mapping how proteins within the devil’s immune system interact, we can find better ways to stimulate the immune system.

The FAST system is also adaptable, meaning new targets can be cut-and-pasted into the system as they’re identified, like changing the bits on a drill. Therefore, it’s useful for studying the immune systems of other animals too, including humans.

Also, the system is simple enough that most people with basic cell culture and molecular biology experience could use it.

Read more: A virus is attacking koalas' genes. But their DNA is fighting back

Needle in a haystack

Cancer cells in humans and animals can travel via the bloodstream to spread, or “metastasise”, throughout the body. Identifying single tumour cells in blood can shed light on how cancer invades devils’ organs and kills them.

Using FAST tools, we discovered CD200 – a protein that inhibits anti-cancer responses in humans – is highly expressed in devils. With FAST tools, we were able to mix DFT2 cancer cells into devil blood and pick them out, despite there being about one cancer cell for every 1,000 blood cells.

CD200 is a powerful “off switch” for the immune system, so identifying this off switch allows us it can help us produce a vaccine that disables the switch. 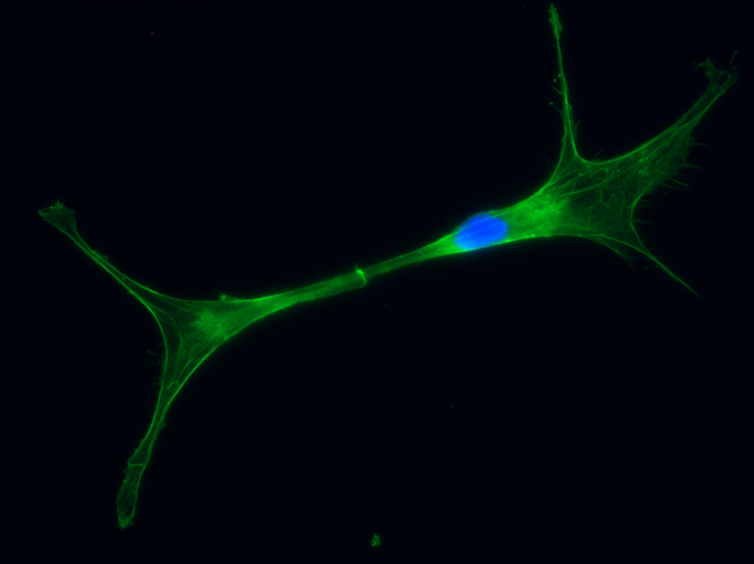 By rapidly sifting out the best ways to stimulate the devil’s immune system, FAST tools are accelerating our research into developing a preventative vaccine to protect devils from DFT.

COVID-19 has once again brought emerging infectious diseases onto the global stage. The ability to rapidly develop immunology tools for new species means we can jump into action when a new virus jumps into humans.

Understanding how the immune systems of other animals fight diseases could provide a blueprint for developing vaccines and therapeutics to help them.