Throughout the second half of May and into June, almost all COVID-19 cases in New South Wales were arrivals from overseas. Only ten locally acquired cases were recorded in the seven weeks before July 6, when a case related to importation from Victoria was notified.

That changed in early July, with the emergence of a cluster of local transmission centred on the Crossroads Hotel in southwestern Sydney. Evidently seeded from Victoria, this cluster had grown to include at least 40 linked cases by July 16.

Can Sydney expect a second wave of infections similar to the one that drove Melburnians back into lockdown?

How similar is this outbreak to the situation in Melbourne?

Melbourne has been dealing with a series of localised outbreaks over the past three months. By mid-June there were several separate clusters with no obvious links to one another. But genomic analysis suggests many of these may be linked to quarantine breaches at the Stamford Plaza hotel.

The absence of clear links between these clusters suggests there may have already been considerable undetected community transmission. Despite increased testing in affected suburbs, the growth in cases with no identifiable source has posed challenges for contact tracers.

Read more: Victoria's coronavirus contact tracers are already under the pump. What happens next?

By contrast, Sydney’s outbreak is currently focused around a single location, with most newly detected cases linked back to the Crossroads Hotel. This suggests there may still be an opportunity to contain this outbreak before it spreads further.

However, the possibility of further undetected outbreaks either having already been seeded from Victoria or occurring in the future can’t be ruled out. NSW must remain on high alert. 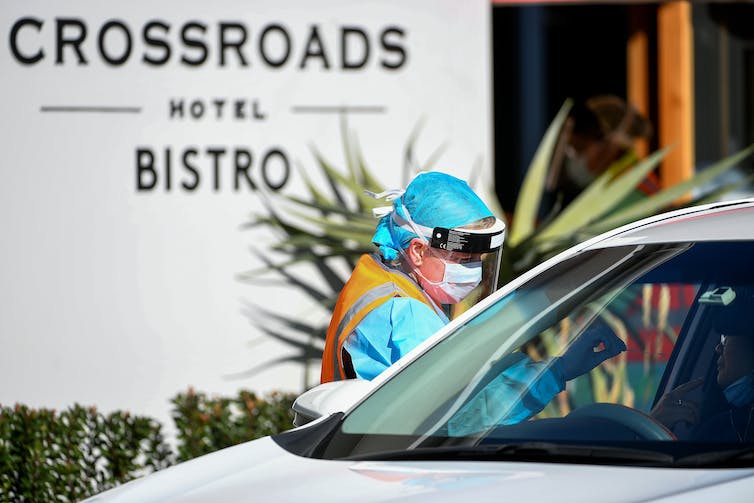 With most of Sydney’s latest cases still traceable to the Crossroads Hotel, NSW’s outbreak is at a literal and figurative crossroads. Bianca de Marchi/AAP Image

How can Sydney’s outbreak be contained?

Genomic evidence suggesting the Crossroads Hotel cluster is linked to Victorian cases is reassuring. The alternative – an unknown source – would imply there is undetected community transmission in Sydney.

However, the location of the outbreak at a hotel, and the large number of people potentially exposed, is concerning. Two of the latest infections were contracted at a nearby gym visited by an infectious person, highlighting that transmission from this cluster is ongoing.

After infection, it can take several days to develop symptoms of COVID-19, and some infected people show only mild or no symptoms. These people are at risk of seeding further outbreaks if they continue to move about and interact. Several other venues, including the Star Casino, have been identified as potential sites of transmission. The geographic dispersion of hotel patrons also makes contact tracing more difficult.

What can NSW learn from Victoria’s experience?

We know from earlier outbreaks, such as the Cedar Meats cluster in Melbourne, that COVID-19 can be brought under control. However, that outbreak happened when there were still significant restrictions on movement and gathering sizes.

The current outbreak in NSW is occurring after a period of relative complacency, and against a background of increased social interactions and relaxed restrictions.

In Victoria, restrictions were reintroduced in response to the current outbreak. Initially these “stay at home” directions applied to selected postcodes, but were subsequently extended to the whole of metropolitan Melbourne and Mitchell Shire. 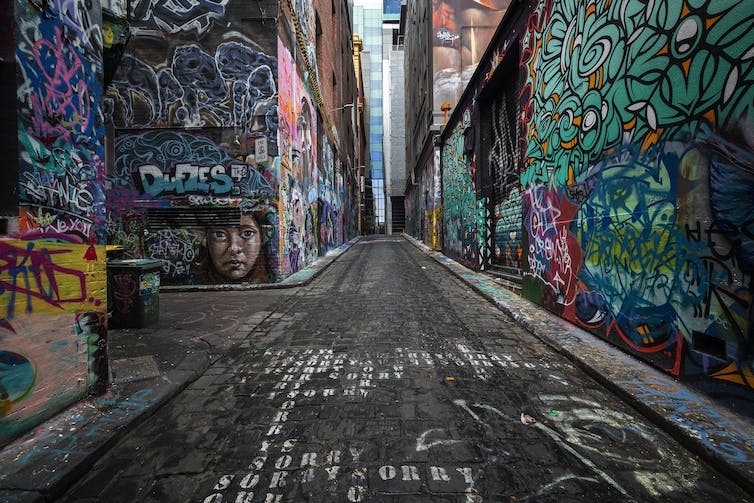 As the cases detected now are a result of infections up to two weeks ago, it is still too early to see the full effect of these restrictions. The rate of new cases does appear to be plateauing amid ongoing high levels of testing. However, the government has not ruled out limiting movement even further.

Lockdown is hard, and can have adverse effects on mental and physical health, on people’s livelihoods, and on the prospects of businesses that have only recently reopened.

There is also the question of whether people will comply with prolonged or repeated restrictions.

Read more: Coronavirus spike: why getting people to follow restrictions is harder the second time around

Mobility data shows that levels of compliance with social distancing waned as the first wave was brought under control, even before restrictions were formally eased. It is hard to tell whether this was driven mainly by a reduced perception of risk by the public, or by a growing weariness of isolation and social distancing.

It has become apparent that some aspects of Victoria’s response could have been improved. Communication with culturally and linguistically diverse populations is important, to ensure everyone understands what they are being asked to do and why. It is vital people are supported to self-isolate, get tested, and stay away from work, and Victoria has recently introduced a Worker Support Payment for this purpose.

What’s next for NSW?

The main question facing Sydney is whether it will be necessary to return to lockdown as Melbourne has done, or whether a less disruptive solution will prove sufficient.

The success of many states and territories in maintaining very low case numbers has prompted suggestions Australia should pursue an elimination strategy. But this will almost certainly require more widespread lockdowns.

NSW has ruled out a return to lockdown but has left the door open for increasing restrictions to continue suppressing the virus.

Melbourne’s experience shows how quickly a handful of cases can turn into a challenging scenario, and highlights the importance of acting quickly and decisively. It also shows that despite the best intentions of less severe or wide-ranging lockdowns, they are not always enough.