In our Art for Trying Times series, authors nominate a work they turn to for solace or perspective during this pandemic.

That we are all spending more time at home these days goes without saying; for those of us in Melbourne, our four walls feel restraining when most ways of leaving them are proscribed. So let me persuade you of a marvellously legitimate alternative to breaking the law, sorting your messy passwords, or rearranging your higgledy-piggledy books into some kind of order. It’s called vicarious escape.

Oddly enough, if my bookshelves had been in proper order I might have missed out on this experience. During the first lockdown I was looking for inspiration among the over-familiar titles when I discovered a book I had bought but not read, and then forgotten I owned. In triumph I carried it as far as the couch, stretched out (the sun was streaming through the windows), and turned to page one.

This was not a cop-out, you understand, for the book was Literary Criticism. It would be instructive, even demanding; it could almost count as work. It was a book born of impressive knowledge but written in a lively, deceptively simple style; it offered new and clever perceptions about a writer of whom you might think everything had long been said. It plunged me back into the beloved novels of Jane Austen, and I read it with delight.

By the time I had reluctantly reached the last page, the next lockdown was imminent, and I rejoiced that one effect of my excellent discovery was to know exactly what I must do next. I would reread one, two, or all of Jane Austen’s major works, beginning with Sense and Sensibility, the first of the six to enthral an unsuspecting 19th century English audience.

Published anonymously in 1811, its first run had sold out. What I did not anticipate was the light this book could throw on life under COVID-19. 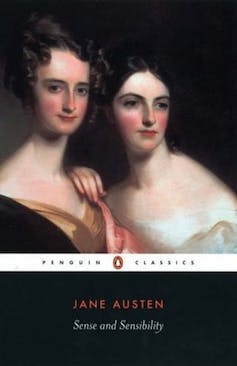 The novel concerns two sisters, Elinor and Marianne. The contrasting natures of the two girls provides Austen’s title, but there is also a younger daughter, Margaret, and an older stepbrother by the mother’s first marriage whose new wife forces the mother and daughters out of the large family house into a cottage in a small village in another county. It is this move that puts the sisters in a situation that has parallels with ours. The tiny village of Barton could offer no social life. A little like people obliged to work from home, the girls found themselves with no external stimuli, other than Nature, with which to fuel their inner thoughts and mutual exchanges. Read more: Turning to the Code 46 soundtrack: bearing solitude in a time of sickness Thrown back on their own resources then, the two older sisters work on their existing accomplishments. Elinor sketches and paints, Marianne practises her piano-playing; they walk daily, sew and read. Their every activity seems to the modern reader almost weirdly extended: a short stroll will occupy two hours; Marianne, at least in intention, will read for six. Now that lack of time is no longer an excuse, we might even think of emulating them, but there is one great difference (at least for me). Each sister has in the other, on tap, a daily companion who provides companionship and stimulation. There is no mention of boredom or restlessness; depression results only from romantic mishaps. How? Their neighbour Sir John turns up, some social life takes off, and Marianne falls in love. Well, this is a novel. I briefly put aside the Dashwood sisters to consider darker examples of literary isolates. Dostoevsky’s Underground Man leapt to mind. He lives utterly alone in a basement; his first words announce that he is “a sick man… a spiteful man … an unattractive man” whose liver is diseased. As a solitary he qualifies, but he’s hardly an example to follow. Back to Jane. But could even she help someone without a sister? Someone whose props, given the age we live in, are texts and emails, both of which seem determined to shorten our exchanges. “U?” is all we need say to seek an opinion by SMS. The phone seems currently the only resource by which we Melburnians could copy the sisters’ ability to introduce, develop, and thoroughly draw out a conversation. But even that we can’t count on. Usually our life-saving story isn’t nearly finished before the friend we’ve rung rudely interrupts with what she wants to say. No. The only escape must be vicarious, and preferably delivered by the divine Jane, with her potential Mr Rights completely taken in by her unscrupulous Miss Wrongs; where Incomes (salaries are for the middle classes, wages for the servants) can suddenly become desperately insufficient or dangerously excessive; where heart-stopping vicissitudes abound. All related in elegant prose that flashes with pointy wit and lashes with quiet disdain. The lockdown does permit you to lose yourself in a beguiling other world – if you have a Jane Austen on hand.

Authors: Judith Armstrong, Honorary Fellow of the School of Languages and Linguistics, University of Melbourne