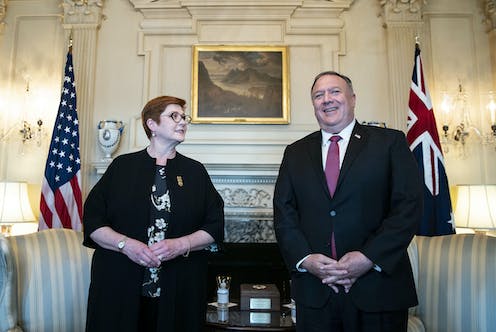 This week’s annual Australia-US ministerial (AUSMIN) talks took place within the fraught context of a world growing in enmity and anxiety — but no longer economically.

The US ambassador to Australia, Arthur Culvahouse Jr, described it as

one of the most consequential AUSMIN meetings in decades.

Certainly, the Australian team went to unusual lengths to participate. Foreign Minister Marise Payne, Defence Minister Linda Reynolds, Defence Force Chief General Angus Campbell and their teams will all have to quarantine for 14 days on their return to Australia.

US Secretary of State Mike Pompeo noted the commitment to travel to the US during the coronavirus pandemic, saying

not many partners will do that for us.

That effort appears to have been acknowledged in the comparative weight of Australian concerns and priorities in the statement released today following the talks.

Euan Graham, a senior fellow for Asia-Pacific security at International Institute for Strategic Studies, told me this bears the stamp of “pretty proactive drafting from the Australian side”.

The statement reflects broader interests than in previous AUSMIN talks — including a strong section on COVID-19 — and omits any mention of the Middle East. Instead, it focuses heavily on the Indo-Pacific region — Australia’s region.

To satisfy the US side in return, China is named-and-shamed considerably more than what is usual for the Morrison government. Concerns about the fate of Hong Kong under its new National Security Law and of the Uyghurs in China’s western Xinjiang region are spelled out strongly in the statement.

Read more: Explainer: why is the South China Sea such a hotly contested region?

Australia and the US ‘don’t agree on everything’

Payne stressed after the talks that while Canberra and Washington share many values,

She also emphasised the importance of Australia’s relationship with China, saying

we have no intention of injuring it, but nor do we intend to do things that are contrary to our interests, and that is the premise from which we begin.

Of course, this comes days after Australia’s strongest statement yet on the legality of China’s effective annexation of the South China Sea — a declaration that drew a rebuke from China’s Foreign Ministry.

But the Washington talks did not see Australia take the further step the US has sought, to support its freedom of navigation operations (FONOPs) by sailing within the 12 nautical miles of the artificial islands China claims in the sea.

This may have reflected a reluctance to embark on a striking new military direction with a US administration that may be replaced in January.

Australia will continue to sail naval vessels through the South China Sea, including in collaboration with the US Navy.

This move is supported by the Labor opposition, with defence spokesman Richard Marles saying it reflects “core national interests”. Some 60% of Australian seaborne trade passes through the area.

Graham, however, says he would be “super-surprised” if the Australians pursued a FONOP on their own, though less surprised, if they did with a flotilla of other countries’ navies.

The US team indicated its approval of the recently announced A$270 billion upgrade of Australia’s defence force – a shift in line with the Trump administration’s urging of US allies to become more self-reliant.

Morrison framed this upgrade within three aims: to more effectively shape the strategic environment, deter actions against Australian interests and respond with credible force when needed.

This also reflects, Graham says, a broader move to refocus Australian defence towards Southeast Asia, the Pacific and India.

The outstanding exception to this new focus, as reflected in the AUSMIN talks, is Taiwan.

The self-governing island is perceived to be coming under more imminent threat from Beijing, which claims it as its territory. The US and Australia affirmed Taiwan’s “important role in the Indo-Pacific region” and indicated their support for its membership in international organisations.

Rather than reflecting a hard defence and security focus, though, the AUSMIN statement prioritised the global response to COVID-19.

Graham believes this is “an Australian win” since the US has lagged in global leadership on the pandemic. The new funding pledged for post-COVID recovery in the Pacific is not massive — but the elevation of health concerns indicated this will now become more central to global security.

Read more: Payne and Reynolds need to tread carefully in Washington as US turns up the heat on China

Overall, the talks indicate that as American concerns about the China challenge rise — among Democrats as well as Republicans — the Indo-Pacific is becoming ever more important, with Australia providing a crucial southern anchor for potential US force deployment.

They also make clear that while the US-Australia alliance remains rock-solid, Canberra will continue to plot its own course. It will approach issues like China trade, relations with the World Health Organisation and other multilateral agencies, and climate change in a strikingly different manner from the US.

Beijing, for its part, will continue to portray Canberra as an American “lapdog”, while at the same time seeking to do what it can to prise the alliance apart.

But this rhetoric is failing to win any policy traction, despite the instability of the Trump White House. Nor is China’s “deep freeze” of Australia. As Morrison has said, he’s “not waiting by the phone” for an invitation to the Great Hall of the People in Beijing.

This week, Chile reportedly chose Japan — not China — to build the first fibre-optic cable connecting South America with the Indo-Pacific, following the completion of a submarine cable between Japan and Australia this month.

All are members of the Trans-Pacific Partnership, which Trump quit soon after his inauguration.

Such moves underline — as does the AUSMIN statement — the growing complexity and challenges of the post-coronavirus world, not only for Washington but also for Beijing.