From tomorrow (Thursday, August 6) only children of permitted workers will be able to attend childcare in Melbourne, which is under stage 4 restrictions.

Parents and providers have been waiting to understand what this means for their children and attendance numbers for the next six weeks.

Read more: Childcare closed to most families, no JobKeeper: what Melbourne's stage 4 lockdown means for parents and the sector

Both Victoria’s Premier Daniel Andrews and the federal Minister for Education Dan Tehan made announcements today that clarify many of these details, although questions remain.

What did Dan Tehan announce?

The federal government funds childcare, along with fees paid by parents.

In April, the government put in place a childcare relief package. Early childhood education and care centres across the country were provided with around 50% of their revenue based on enrolment numbers between February 17 and March 2, on the basis parents weren’t charged any fees.

Services were also able to access JobKeeper for eligible employees.

The package ended in July, with as well as JobKeeper for employees. But there is a transition package back to pre-COVID funding arrangements until September 27. The government is making up 25% of the childcare service fee revenue from February 17 – March 1.

Read more: Morrison has rescued childcare from COVID-19 collapse – but the details are still murky

This 25% of service revenue will be increased by at least 5%, and possibly more depending on their new rate of attendance and subsidy levels for children still attending.

Dan Tehan said parents will be given 30 extra absence days, on top of the 42 already available. Families can use their 72 total absences to cover non-attendance in the next six weeks, and won’t pay fees for those days.

The extra absences will be given to all parents across Victoria — not just those in Melbourne.

These changes will be in place from Thursday, August 6. 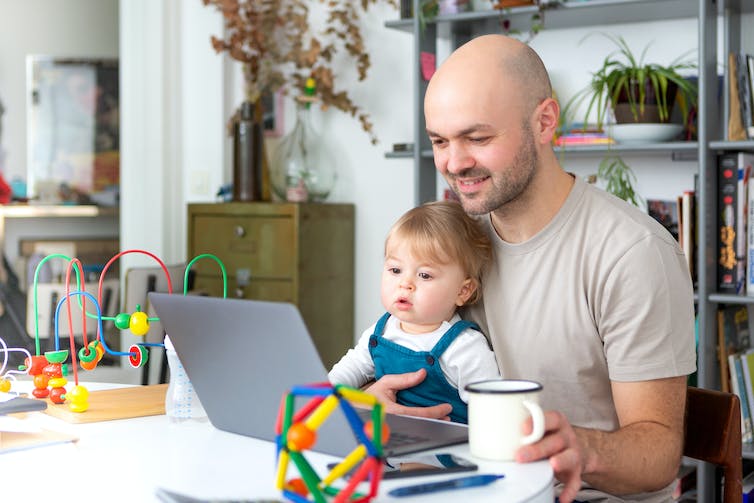 Parents who aren’t permitted workers should theoretically be able to keep their child’s place in childcare and not have to pay for it. Shutterstock

What did Daniel Andrews announce?

Daniel Andrews said the rules on who can attend childcare will be the same for childcare, kindergarten and school. If children can be supervised at home, they must be at home — even if one parent is a permitted worker.

A permitted worker at home will be able to access these education services, but only if no-one else can supervise their children.

Parents will need to obtain an access to childcare permit from the government, in addition to their permit to work.

What is still unclear?

There remains considerable confusion in the package for families and services.

For services, it’s unclear whether they will be required to remain open if it’s not practical to do so. Some services might only have a few children eligible to attend, creating cost pressures to open with small numbers, or consider combining operations with other services.

If providers decide they need to cut costs, staff hours will be the first to go, because labour costs are a significant proportion of their budgets. While the employment guarantee that exists requires jobs to be protected, for casuals this means their hours could be minimal.

Read more: COVID-19: what closing schools and childcare centres would mean for parents and casual staff

The free absence days are aimed at keeping children enrolled while ensuring parents won’t pay while they’re not using services. They are also aimed at ensuring providers can continue to operate and remain viable, and provide early learning and care to children of permitted workers who cannot care for their children while working.

But for parents to access absence days with no charge, childcare providers need to agree to waive the gap fees.

That said, there is no mechanism for the government to mandate services to waive the fees. And we have heard reports of services informing parents they are not financially able to waive gap fees for absences.

This raises the question: if a particular centre won’t waive a family’s gap fees, will that family be able to keep their child enrolled in their centre?

For families, the new permit system for permitted workers offers no clarity about how vulnerable children will be identified. These children have most to gain from attending early childhood services, and are least likely to live in families where permit systems are likely to be taken up.

There are no easy answers to these questions, which have highlighted once again how complex and essential early childhood services are. It has also highlighted the need for greater attention that governments need to give to the needs of their youngest citizens and families.