Under the first coronavirus lockdowns, birdwatching increased tenfold in Australia, with much of it done in and near the watchers’ own backyards. And as Melbourne settles into stage 4 restrictions, we’ll likely see this rise again.

Since the turn of the 20th century, when birdwatching as a hobby began in Australia, birders have cherished the birds in their backyards as much as those in outback wilds. Birdwatchers admired wild birds anywhere, for one of their big motivations was — and is — to experience and conserve the wild near home. 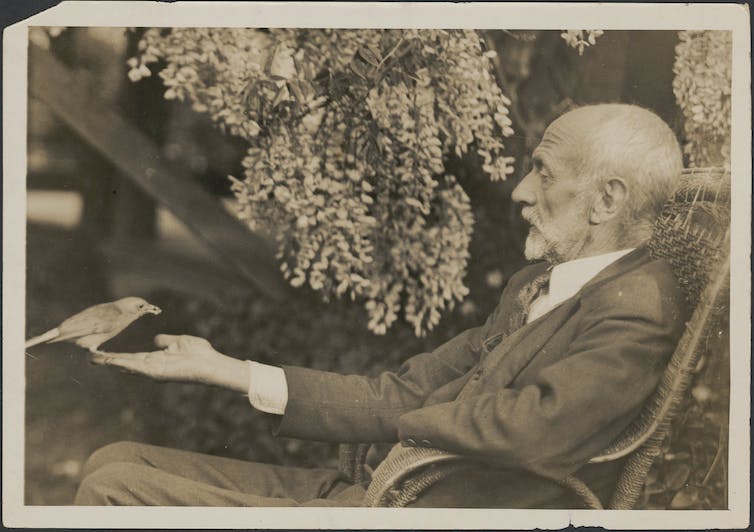 This wasn’t an abstract ambition, but a heartfelt commitment. Birdwatchers have long known that if we are to conserve nature, we need not only the intellectual expertise of science but also an emotional affinity with the living things around us. Birders in Sydney in the 1920s and ‘30s knew this well.

The Birdman of Wahroonga

Harry Wolstenholme, son of the feminist Maybanke Anderson, was an office-bearer in the Royal Australasian Ornithologists’ Union and a keen amateur birdwatcher. In the 1920s, his usual birding site was his own garden in the northern Sydney suburb of Wahroonga.

There, bird life was prolific. Harry recorded 21 native and five introduced species nesting in or near his garden, plus many more avian visitors.

His garden drew a stream of notable birders from the Sydney branch of the ornithologists’ union, such as wildlife photographer Norman Chaffer, naturalist and journalist Alec Chisholm, and businessman Keith Hindwood. (The union members were predominantly male, though with a liberal sprinkling of women, including Perrine Moncrieff who became its first female president in 1932.) 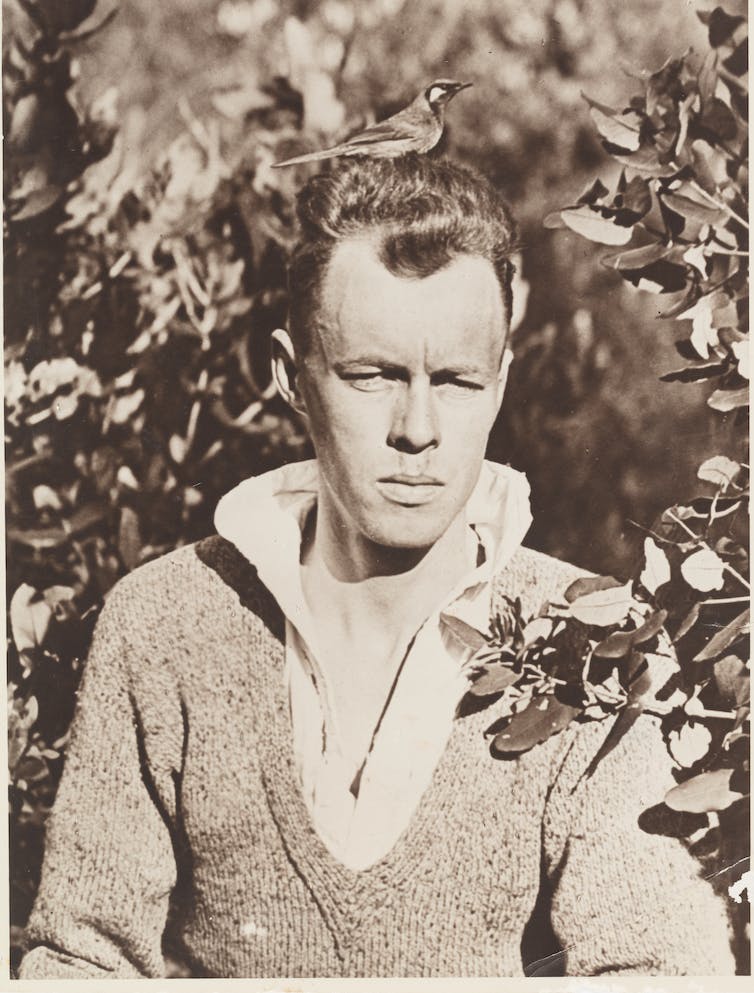 Keith Hindwood, with a White-eared Honeyeater on his head, 1929. Mitchell Library, Author provided

For his closeness to the birds, Harry earned the nickname “The Birdman of Wahroonga”. That suburb still hosts a good range of species, although the bird life is no longer as prolific as in Harry’s day.

Many others birded in city environs and, like Harry, published their suburban ornithological studies in the union journal, The Emu.

In 1932, Alec Chisholm devoted a whole book, Nature Fantasy in Australia, to birding in Sydney and surrounds. Featured on its early pages is a painting by celebrated bird artist Neville Cayley captioned “The Spirit of Sydney: Scarlet Honeyeater at nest in suburban garden”. 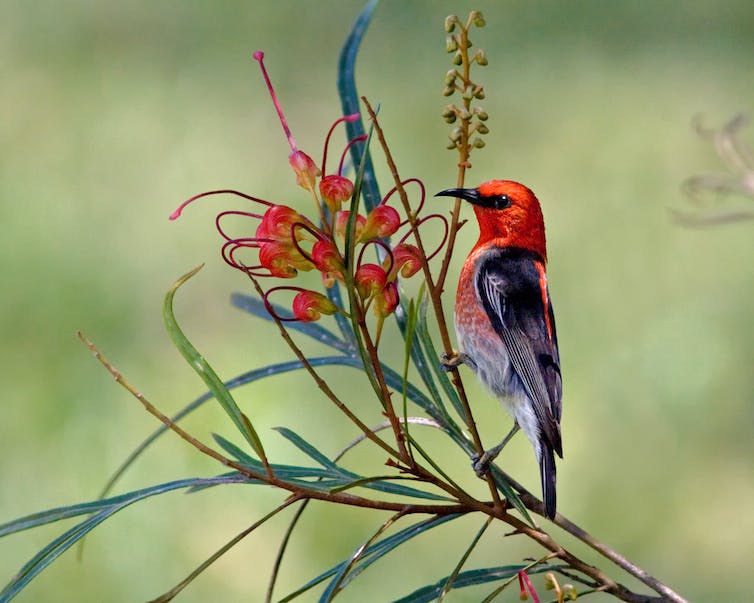 Scarlet honeyeaters can still be spotted in urban parts of Australia. Shutterstock

The fact this gorgeous little bird was common in Sydney’s gardens exemplifies Chisholm’s theme of urban Australians’ ready access to the wonders of nature. Scarlet Honeyeaters can still be found in Sydney though they are no longer common there.

Conservation then differed from conservation now, having a stronger aesthetic orientation and less ecological content. Nonetheless, these pioneer conservationists, among whom birdwatchers were prominent, laid the foundations on which environmentalists later built.

Chisholm urged people not merely to observe birds but also, more importantly, to love and cherish them. In his first book in 1922, Mateship with Birds, he urged readers to open their hearts to their avian compatriots and embrace them as friends and fellow Australians. 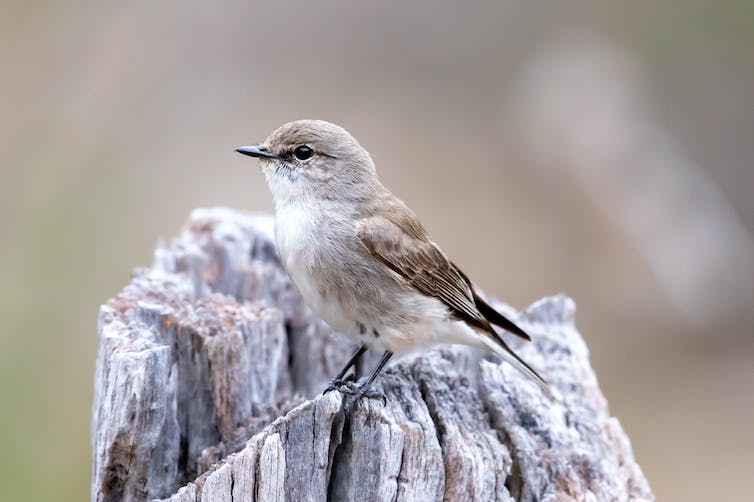 One way of fostering this feeling, Chisholm and his birding contemporaries believed, was to give birds attractive names. For example, “Jacky Winter” struck the right note, and as Chisholm wrote:

it would be a healthy thing if we had more of these familiar names for our birds, bringing as they do, a feeling or sense of intimacy.

While those birders urged people to cultivate an emotional connection with nature, and while most were amateur rather than professional ornithologists, they nonetheless made major contributions to the scientific study of birds.

Science was needed, they realised, but so was feeling. As one reviewer of Nature Fantasy enthused, Chisholm was a naturalist “who in his writings combines with the exact research of a scientist the sensibility of a poet”.

Our city birdscapes have since changed. Some species have dwindled; some have increased. But suburbia still holds a remarkable degree of biodiversity, if only we’re prepared to look. 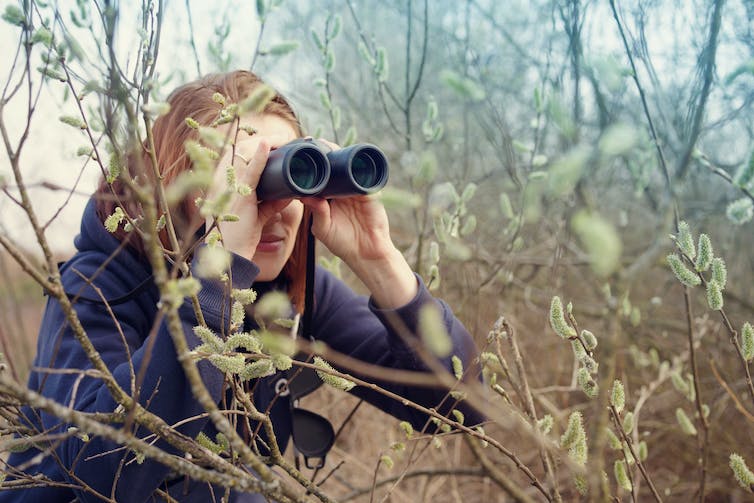 Lockdown is a great time to try backyard birdwatching. Shutterstock

The world of the birders of the 1920s and '30s is gone. Our attitudes toward nature are cluttered with fears unknown in their day, such as climate change. Yet those early birders still have something worthwhile to tell us today: the need to connect emotionally and tangibly with nature.

To hear that message, we need not, and should not, jettison today’s environmental fears. But fear needs complementing with more positive emotions, like love.

Despite — or because of — the prominence of environmental alarms in today’s world, the need to admire and love living things remains as pressing as ever. As birdwatchers have long known, the birds fluttering in our own backyards are adept at fostering those feelings.