CC BY-ND Climate Explained is a collaboration between The Conversation, Stuff and the New Zealand Science Media Centre to answer your questions about climate change. If you have a question you’d like an expert to answer, please send it to climate.change@stuff.co.nz Geothermal electricity produces emissions but is categorised with wind and solar power as a renewable source of power. Why? Can we reduce the emissions geothermal plants produce? Geothermal resources occur where magma has come up through the Earth’s crust at some point in the distant past and created large reservoirs of hot rock and water. In New Zealand, the Taupo Volacanic Zone has 23 known geothermal reservoirs. Seven of these are currently used to generate more than 15% of New Zealand’s electricity supply.

New Zealand’s geothermal areas also include mineral pools and geysers. Shutterstock/Dmitry Pichugin Continuous but finite energy source The geothermal reservoirs are vast in both size and stored energy. For example, the Ngatamariki reservoir extends over seven square kilometres and is more than a kilometre thick. The geothermal resource is more consistent than hydro, solar and wind, as it doesn’t depend on the weather, but the geothermal heat in a reservoir is finite. Environment Waikato estimates that if the thermal energy in New Zealand were extracted to generate 420MW of electricity, the resource would likely last for 300 years. The current generation is more than twice this rate, so the reservoirs will last about half as long. Geothermal energy is extracted by drilling up to 3km down into these hot zones of mineral-laden brine at 180-350℃. The engineering involves drilling a number of wells for extraction and re-injection of the brine, and the big pipes that connect the wells to the power plant. 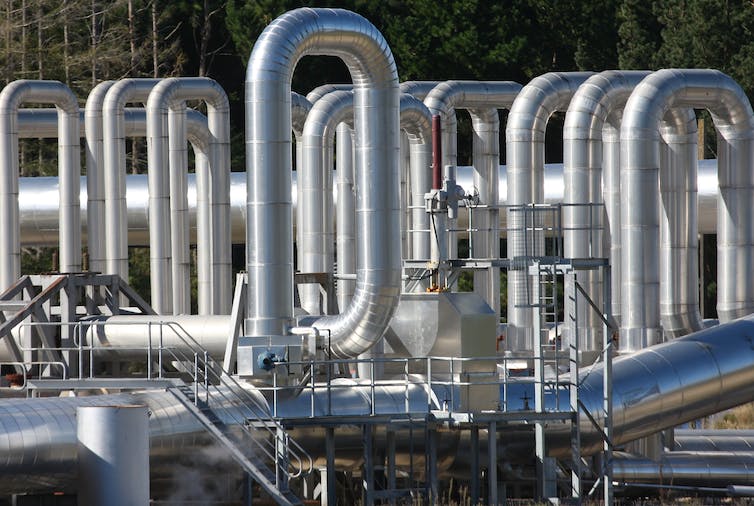 A geothermal power plant converts heat into electricity. Shutterstock/Joe Gough The power plant converts the thermal energy into electricity using steam turbines. These plants generate nearly continuously and can last for more than 50 years. Read more: New Zealand wants to build a 100% renewable electricity grid, but massive infrastructure is not the best option Greenhouse gas emissions The brine contains dissolved gases and minerals, depending on the minerals in the rocks the water was exposed to. Some of these are harmless, like silica which is basically sand. But some are toxic like stibnite, which is antimony and sulphur. Some gases like carbon dioxide and methane are not poisonous, but are greenhouse gases. But some are toxic. For example, hydrogen sulfide gives geothermal features their distinctive smell. The carbon dioxide dissolved in geothermal brine normally comes from limestone, which is fossilised shells of sea creatures that lived millions of years ago. The amount of greenhouse gas produced per kWh of electricity generated varies, depending on the reservoir characteristics. It is not well known until the wells are in production. The New Zealand Geothermal Association reports the greenhouse gas emissions for power generation range from 21 grams CO₂ equivalent per kWh to 341gCO₂(equiv)/kWh. The average is 76gCO₂(equiv)/kWh. For comparison, fossil fuel generation emissions range from 970 to 390gCO₂(equiv)/kWh for coal and gas combined cycle plants. The gases have to be removed from the brine to use it in the plant, so they are released to the atmosphere. The toxic gases are either diluted and released into the atmosphere, or scrubbed with other substances for disposal. The Mokai power plant supplies carbon dioxide to commercial growers who use it in glasshouses to increase the growth rate of vegetables. Read more: Climate explained: could the world stop using fossil fuels today? Finding ways to use less energy All energy-conversion systems can be made better by employing engineering expertise, investing in research and enforcing regulations, and through due diligence in the management of the waste products. All energy-conversion technology has costs and consequences. No energy resource should be thought of as unlimited or free unless we use very small quantities. New Zealand is in a period of energy transition, with a goal of reducing greenhouse gas emissions to net zero by 2050. The production and use of coal is already in decline globally and oil and gas are expected follow. We tend to think about energy transition in terms of technologies to substitute “bad” energy with “green” energy. But the transition of how energy is produced and consumed will require a massively complex re-engineering of nearly everything. The installed capacity for wind and solar has been growing over the past decade. In 2018, however, New Zealand consumption of electricity generated by wind and solar was 7.72PJ, while oil, diesel and LPG consumption was 283PJ and geothermal electricity was 27PJ. Another consideration is lifetime; wind turbines and solar panels need to be replaced at least three times during the lifetime of a geothermal power plant. A successful energy transition will require much more R&D and due diligence on products, buildings and lifestyles that need only about 10% of the energy we use today. An energy transition to build sustainable future systems is not only possible, it is the only option.