In the year then of our Lord 1348, there happened at Florence, the finest city in all Italy, a most terrible plague…

Giovanni Boccaccio introduces his acclaimed collection of novellas, the Decameron, with a reference to the most terrifying existential crisis of his time: the decimating effects of the bubonic plague in the 1348 outbreak known as the Black Death.

Boccaccio’s book, written between 1348 and 1353, has been acclaimed as an exemplar of vernacular literary prose, and a commentary on the “peste” that swept through Europe that year.

A classic of medieval plague literature, it continues to be cited by physicians and epidemiologists to this day for its vivid depiction of a disease that held a city under siege. 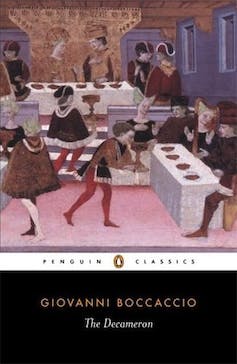 In the introduction to his book, Boccaccio estimates that more than 100,000 people - over half of the city’s inhabitants - died within the walls of Florence between March 1348 and the following July. He vividly describes physical, social and psychological sufferings, writing of people dying in the street, rotting corpses, plague boils, swollen glands known as “buboes” – some the size of eggs, others as large as apples – bruises and the blackening skin that foreshadowed death. Boccaccio’s introduction is followed by ten sections containing short stories. Each of the book’s ten storytellers tells a story a day for ten days. Derived from Greek, the word decameron means ten days and is an allusion to Saint Ambrose’s Hexameron, a poetic account of the creation story, Genesis, told over six days. Read more: Guide to the Classics: Albert Camus' The Plague The Decameron is a tale of renewal and recreation in defiance of a decimating pandemic. Boccaccio attributes the cause of this terrible plague to either malignant celestial influences or divine punishment for the iniquity of Florentine society. 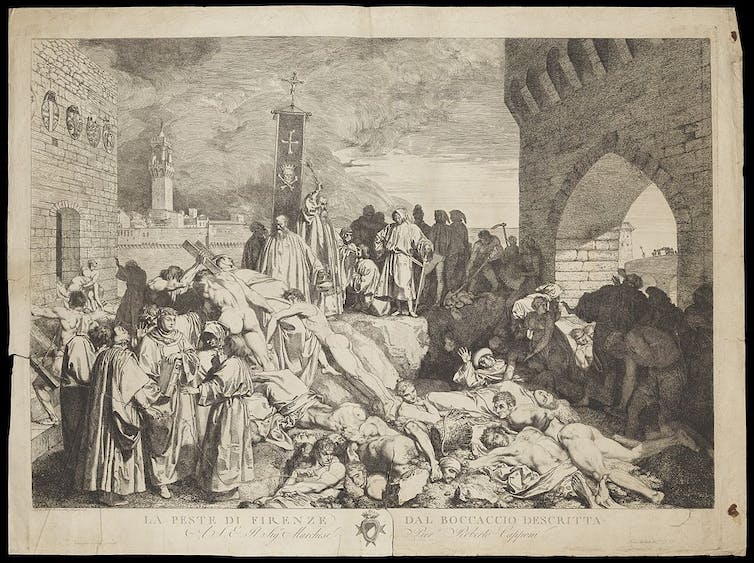 The plague of Florence in 1348, as described in Boccaccio’s Decameron. Etching by L. Sabatelli after himself. Credit: Wellcome Collection/Wikimedia Commons Social distancing and fragrant nose coverings Unlike the plague of 1340 - which killed an estimated 15,000 Florentines - that of 1348 was, according to Boccaccio, far more contagious, spreading with greater vigour and speed. It was extraordinary, in his view, that the disease did not merely spread from human to human but crossed species too. He saw two pigs dying within moments of biting infected clothing in the street. Florentine officials removed household waste and contaminants from the city in attempts to eradicate the deadly pestilence, and banned infected people from entering. They issued public pleas and advised residents on measures that would minimise risk of contagion, such as social distancing and increased personal hygiene. 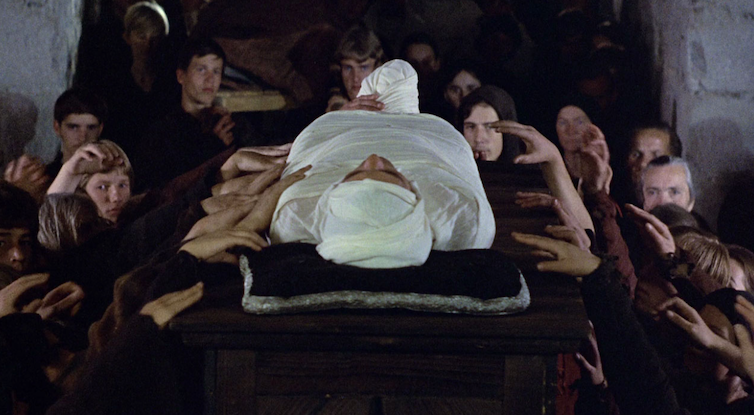 A scene from Pasolini’s 1971 film The Decameron. Produzioni Europee Associate (PEA), Les Productions Artistes Associés, Artemis Film Boccaccio, in the same introduction, takes aim at those who fled the sick to protect their own health and in doing so degraded the social fabric. Extreme interpretations of social distancing led to people shunning neighbours and members of their extended and immediate families. In some cases, he writes, parents even deserted their children. Read more: Guide to the Classics: how Marcus Aurelius' Meditations can help us in a time of pandemic While some took conservative measures – self-isolating indoors in small numbers, eating and drinking moderately and shutting out contact from the outside – others, he writes, roamed freely, gratifying their senses and meeting their desires for food, fun and sex: …satisfying their every yearning, laughing and mocking at every mournful accident; and so they vowed to spend day and night, for they would go to one tavern, then to another, living without any rule or measure… Others still consumed only what their bodies needed and excluded contact with the infected. But they wandered wherever they wished, carrying bunches of fragrant flowers, herbs, or spices, or wearing them across their noses in a bid to repel the infection and the offensive odour of death. 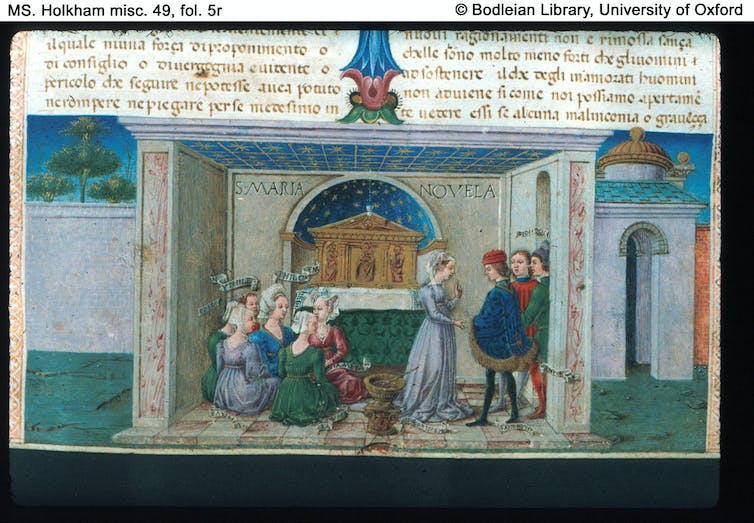 Manuscript from the Decameron illustrated by Taddeo Crivelli. Wikimedia Commons Boccaccio’s unfavourable account, lamenting moral degradation and the enormous human suffering, is interrupted by a ray of light in the form of seven young noblewomen and three young gentlemen who appear in the Church of Santa Maria Novella on a Tuesday morning. They become the storytellers of the Decameron. Collected as a brigade (brigata), they exhibit civility, gentility, strength and a commitment to duty. Boccaccio presents them as decorous and untarnished, having each cared for their loved ones while within the city walls. He gives each a name that suits their personal qualities, choosing monikers from his own and other literary works. They are: Pampinea, Filomena, Neifile, Filostrato, Fiammetta, Elissa, Dioneo, Lauretta, Emilia and Panfilo. Refuge through story At the suggestion of the eldest noblewoman, Pampinea, the brigata leave the terrible pestilence and their devastated, plague-ridden city to take refuge in a rural villa in the nearby hills. They are not abandoning others, she assures the group, as their relatives have either died or fled. The ten pass time by partaking in banquets, playing games, dancing, singing and telling stories. Each member of the group narrates one story every day across the following ten days, under the supervision of the elected king or queen for the day. The proceedings close with singing and a dance. 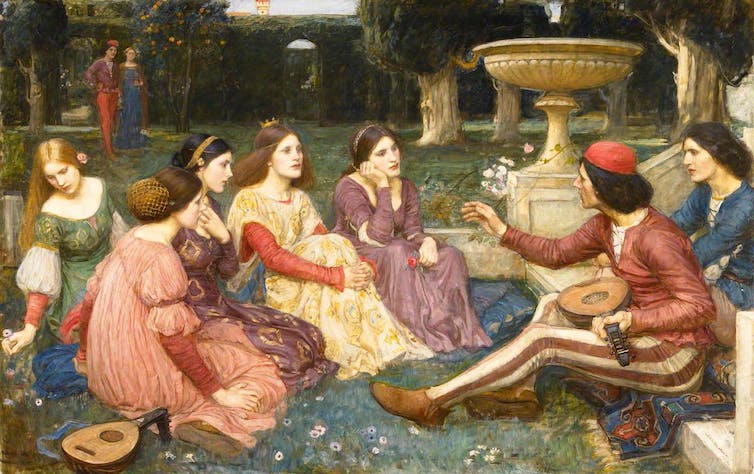 John William Waterhouse, 1916, A Tale from the Decameron. John William Waterhouse/Wikimedia Commons Over those ten days, the brigata tell 100 stories. In them, they name real people – historical, contemporaries and near contemporaries – who would have been recognisable to readers of the Decameron in Boccaccio’s lifetime. This gives a semblance of reality to the stories told inside an otherwise imaginary scene. The stories reflect Boccaccio’s accounts of moral decay in Florence at the time. Corruption and debauchery abound. Read more: Guide to the Classics: Dante’s Divine Comedy How then do the pastimes of the brigata bring about renewal and recreation? The Decameron situates vices within fiction and serves as a guide for preserving the mind during physical isolation. Retreating from a stricken city to live a simple life in a communal isolation, the brigata entertain each other and by following disciplined, structured rituals, recover some of the predictability and certainty that, according to Boccaccio, had been lost. Contemporary resonances The Decameron was the first prose masterpiece to be written in the Tuscan vernacular, making it more accessible to readers who could not read Latin. It was first distributed in manuscript form in the 1370’s and almost 200 copies were printed over the following two centuries. The work was censured in 1564 by the Council of Trent and a “corrected” version, expunging all references to clerics, monasteries and churches, was released in 1573. 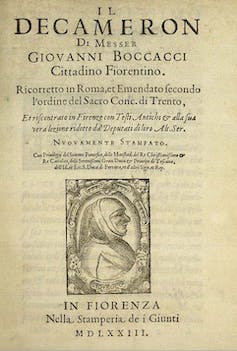 Cover page of the Decameron, heavily redacted (recorrected) in 1573 by orders of the Council of Trent. Fransplace/Wikimedia Commons Boccaccio’s introduction to the Decameron is a frame-story - a narrative that frames another story or a collection of stories. This form became a popular literary model for enveloping collections of short stories that blend oral storytelling and literature. Variations and borrowings are seen in Chaucer’s Canterbury Tales and Shakespeare’s All’s Well That Ends Well. The most well-known film adaptation of the Decameron is the first of a trio of masterpieces in Pier Paolo Pasolini’s 1971 Trilogy of Life. Showcasing ten of the 100 stories in the Decameron, it remains one of Italy’s most popular films. The Decameron will resonate with modern readers as we grapple with the horror of our own current pandemic. The book is a prescription for psychological survival, a way of mentally distancing from terrible visions, death counts and grim economic forecasts. Although its framing events took place over 600 years ago, the Decameron’s modern readers, like Boccaccio’s brigata, will find comfort in company and optimism and a sense of certainty in the programmed rituals it describes. Through its 100 stories, readers can vicariously experience situations that are out of their reach. They can be entertained, find lots to laugh about, and ultimately celebrate the joy and restorative powers of storytelling itself.