Croplands are a valuable, yet scarce natural resource. To guard against serious and potentially irreversible environmental harm, croplands should not extend beyond 15% of the earth’s ice-free surface.

Croplands are mainly used for food production. So it’s important to ask whether our diets are biting off more than our fair share.

In recent research, we looked at the cropland footprints of the diets of more than 9,000 Australian adults, involving more than 5,000 foods.

We found if everyone ate like the average Australian, the 15% limit on the area for global croplands would be exceeded, albeit modestly. Reducing our intake of discretionary foods such as cakes, biscuits, pizza and hot chips is the best way to make our diets more sustainable.

Ploughing new lands for crop production entails the loss of forest and grassland, which can threaten biodiversity through habitat loss, and disturb water and nutrient cycles through changes in drainage and fertiliser use. 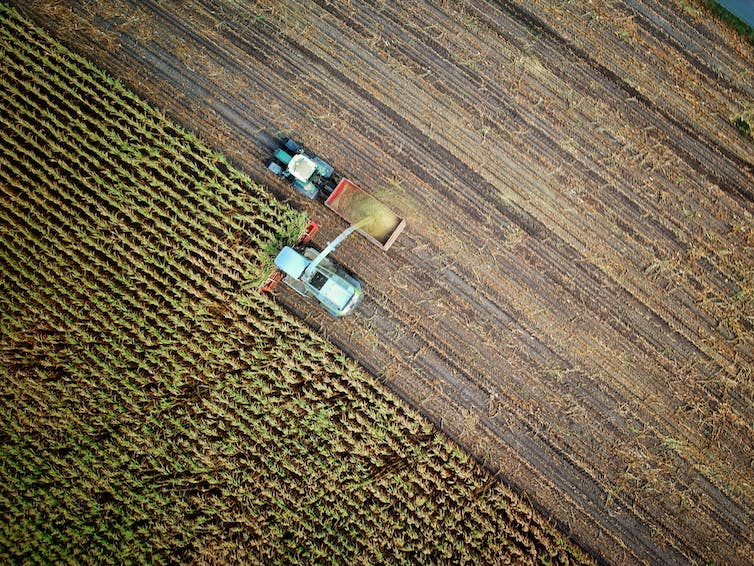 In landmark research in 2009, leading scientists proposed the idea of “planetary boundaries” to mark the thresholds for our use of the environment, such as the area of croplands.

If global croplands are to occupy no more than 15% of the ice-free land surface, as they proposed, the total area cannot extend beyond about 2 billion hectares. It’s difficult to know for sure, but it’s likely the world is already approaching this boundary, or even marginally exceeding it.

Read more: Our food system is at risk of crossing 'environmental limits' – here's how to ease the pressure

With today’s global population of around 7.8 billion, this limit means the requirements of an individual’s daily diet should not exceed more than 7 square metres of cropland.

However, the world’s population is rapidly increasing and is expected to surpass 8.5 billion by 2030. At 9 billion, the global share of croplands shrinks to around 6.1 square metres per person per day.

Eating beyond the boundary

The good news is Australian dietary habits vary enormously. Already, many Australians are eating well and within the global cropland boundary. Australians with healthier diets and lower cropland footprints required only 4.2 square metres per day.

These lower footprint diets were distinguished by much lower consumption of discretionary foods. These are energy-dense and nutrient-poor foods high in saturated fat, added sugars, added salt, and alcohol — ingredients associated with foods with high-crop use.

Read more: It takes 21 litres of water to produce a small chocolate bar. How water-wise is your diet?

For example, potato chips are made from potato and vegetable oil, both of which require cropland. Even beer depends on cropland, using barley and hops in its production.

Along with reducing food waste, reducing the intake of discretionary foods to sensible levels is the most important action Australians can take to make their diets healthier and more sustainable.

These discretionary foods also tend to lead to the over-consumption of energy due to their high energy density, which is not only a problem for the environment, but also our waistlines.

Processed foods often use a surprising amount of cropland. An apple might weigh 100 grams, but a small glass of apple juice might use 400 g of apples. 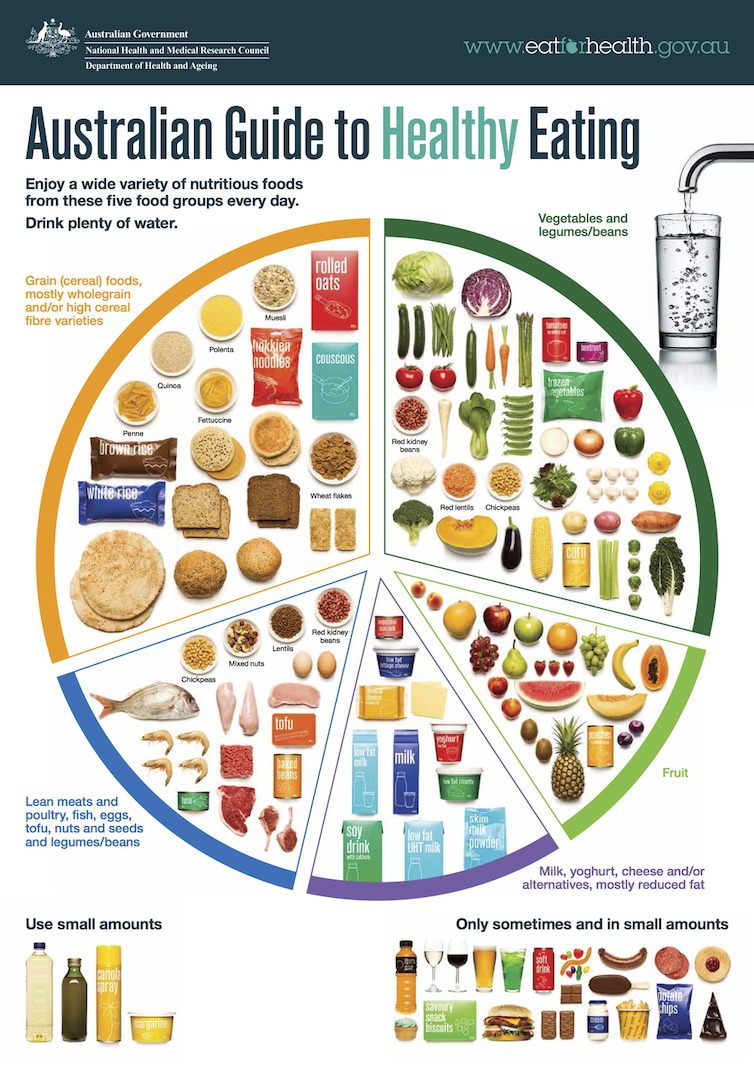 Stick to the five food groups, though it’s important to limit the consumption of poultry and pork to keep your cropland footprint down. eatforhealth.gov.au

According to the Australian Dietary Guidelines, most Australian’s consume too many discretionary foods instead of choosing foods from the five food groups: grains, vegetables and legumes, fruits, dairy products and meats.

Following discretionary foods, the second largest contribution to the cropland footprint is from the “fresh meat and alternatives” food group. This food group includes eggs, nuts and legumes and is an important source of protein and nutrients.

In this food group, wild-caught seafood and game meats had no associated cropland use. Also at the lower end of the scale were tofu and pulses like chickpeas (0.17 and 0.18 square metres per serving). 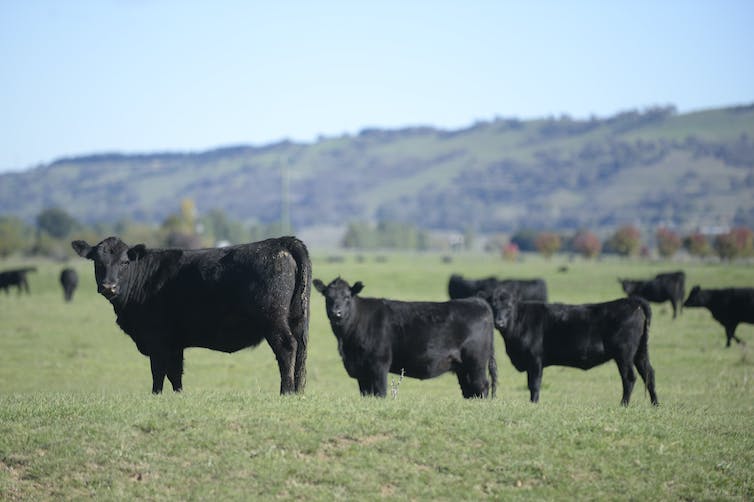 Lamb and beef had moderate cropland footprints (0.64 and 0.82 square metres per serving). That’s because in Australia, sheep and cattle mostly graze on grasslands.

But livestock have higher cropland footprints when they’re fed with crop-based feed such as cereals, soybeans and oilseed meals.

If Australians follow the Australian Dietary Guidelines, it is possible to eat within the global cropland boundary and there is flexibility to enjoy a variety of foods in the “fresh meats and alternatives” food group.

However, the guidelines don’t specify how much poultry or pork should be eaten, which becomes an issue if these meats make up a big part of a diet.

Diets compliant with the Australian Dietary Guidelines that were within the global cropland boundary contained more seafood, beef, lamb and vegetarian food. 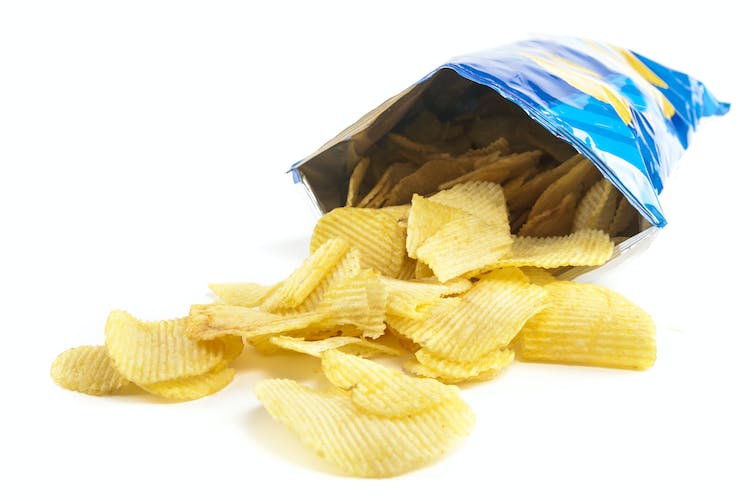 Make chips a sometimes food to eat within the appropriate cropland boundary. Shutterstock

It’s also important to note croplands across Australia and the world are not equally productive. To provide a reliable measure of resource use, we calculated cropland footprints taking both the area occupied and productive potential into account.

In any case, sticking to a healthier diet as described in the dietary guidelines, with moderate intake of cropland-intensive poultry and pork, is the best way to ensure you’re eating within sustainable cropland boundaries. Otherwise there just won’t be enough food to go around.

Read more: Climate change is hurting farmers – even seeds are under threat