Prime Minister Scott Morrison announced on Wednesday the Australian government has signed a letter of intent to procure the University of Oxford’s vaccine for SARS-CoV-2 (the virus that causes COVID-19) and to provide it free to all Australians.

All the signs are promising so far, as the vaccine has been shown to provoke an immune response in humans and hasn’t yet caused serious side effects.

But there’s a risk the vaccine may not fully protect against COVID-19 in humans. It still needs to pass through phase 3 trials, which are currently recruiting and expecting results at the end of the year. So we can’t get too excited yet.

Importantly, it also hasn’t been tested on vulnerable groups, having mainly been tested so far on young, healthy individuals. It may still produce serious side effects we don’t yet know about.

For these reasons, and given there are more than 160 vaccines currently in development, the federal government is likely to sign further vaccine supply deals in the future — it doesn’t want all its eggs in one basket.

The candidate vaccine, called “ChAdOx1 nCoV-19”, has been developed by University of Oxford researchers and is being tested in human trials in partnership with multinational pharmaceutical company AstraZeneca, which will also produce and market the vaccine.

The vaccine also stimulates the production of special immune cells called T cells, which may kill infected human cells that have virus hiding inside of them. Importantly, the next time the immune system of a vaccinated person sees the SARS-COV-2 spike protein, it knows what to do, and generates antibodies and T cells even faster, showing immunological memory. 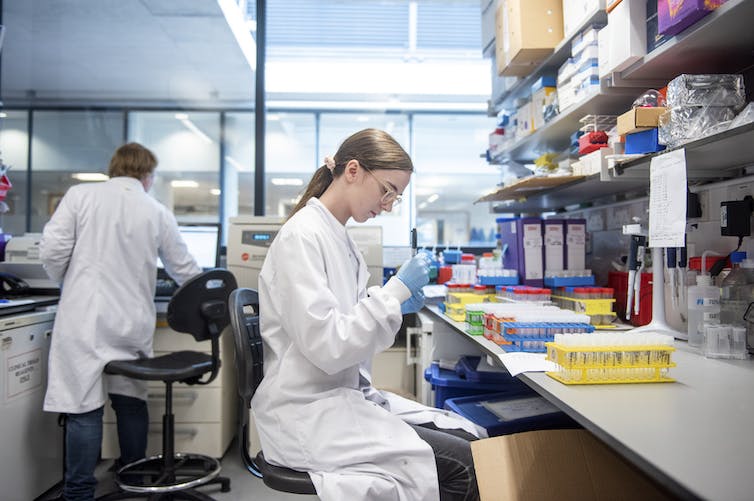 Oxford’s vaccine has yet to complete phase 3 trials, so we don’t know for sure it will be safe and effective for all. John Cairns/University of Oxford/AP/AAP

Where are the trials up to?

Oxford’s vaccine is one of the frontrunners. It was initially tested in primates, who were vaccinated and then exposed to the virus - with promising results showing decreased amounts of virus (viral load) in their lungs and preventing pneumonia in all the animals studied.

It was then tested in humans, with the results reported in peer-reviewed publications suggesting it’s safe and can produce an immune response.

In one study, published in The Lancet in July, 543 healthy adults were immunised with the vaccine. It didn’t cause any serious or concerning adverse effects, but many people experienced mild symptoms. Around two-thirds experienced pain at the injection site, 70% experienced fatigue, and 68% suffered headaches — although these symptoms are typical of many vaccines. These mild symptoms were relieved for some participants with paracetamol.

The study also found the vaccine stimulated the right kind of immune response, with good levels of neutralising antibodies and T cells against the spike protein. These results have allowed it to progress to large-scale trials in which thousands of people will be immunised in countries including the UK, Brazil and India. 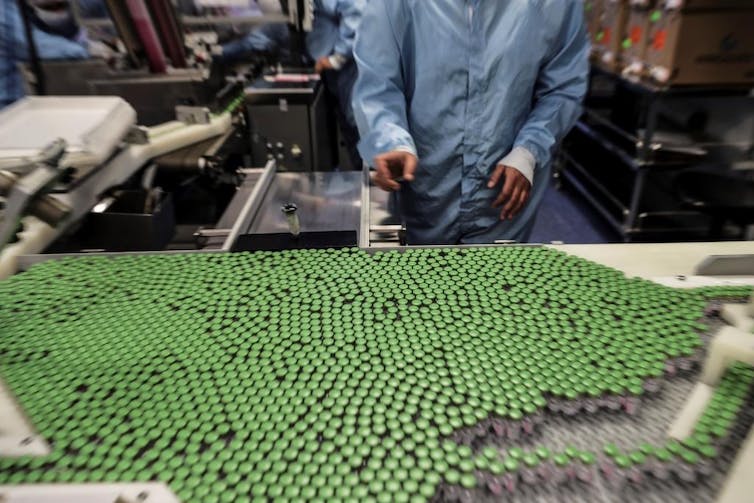 The vaccine is currently being tested in large-scale trials in countries like Brazil and India. Because it’s only been tested among relatively young and healthy people so far, we don’t know yet whether it will cause serious side effects for more vulnerable people. AAP Image/EPA/Antonio Lacerda

The most advanced of these trials is in Brazil. The timing of results will partly depend on how quickly volunteers are enrolled into the study, and the extent to which they are then naturally exposed to the virus in the community. Hence trials need to be big and be in countries where the disease is prevalent.

We should know by the end of this year if the vaccine is a success. If it’s found to be safe and protective it can then be licensed.

Read more: Creating a COVID-19 vaccine is only the first step. It'll take years to manufacture and distribute

Australia’s agreement, signed with AstraZeneca, is a letter of intent, so the deal will only go ahead if the current phase 3 trials show the vaccine does indeed protect against COVID-19. If it does, Australia will receive the vaccine’s formula and permission to manufacture it on shore. Biotechnology company CSL in Melbourne has had discussions about potentially fully or partially producing the vaccine on shore.

Australia has also struck a deal with US medical technology company Becton Dickinson to supply enough needles and syringes to deliver the vaccine. The government has pledged to provide the vaccine for free to all Australians.

All the signs are promising thus far, but there’s a risk at this stage the vaccine may not protect fully against COVID-19 in humans. Indeed, most new candidate vaccines do not work during the development and testing phases.

However, as there are more than 160 different SARS-CoV-2 candidate vaccines based on diverse technologies in development, with 29 in clinical trials, it’s likely some will successfully make it through the pipeline.

There are several other candidate vaccines being tested in Australia, including at the University of Queensland. The Australian government has also invested in its development financially, though no supply deal has been announced as yet.

It’s also important to note that even after phase 3 trials in thousands of people, some vulnerable groups may not respond in the same way to the vaccine as the healthy young adults mostly tested in these trials. Encouragingly, the current phase 3 trials will include some older adults, but other vulnerable people may still require additional tests.

It’s great the Australian government is moving forward with this, but we must also remember the world’s poorer countries, and avoid the temptation to indulge in “vaccine nationalism” – rich countries monopolising vaccine stocks at the expense of others.

With this in mind, the COVAX global vaccines facility has been created by the World Health Organisation, global vaccine alliance GAVI, and the Coalition for Epidemic Preparedness Innovations. This is an unprecedented global collaboration combining funds from wealthier countries to provide vaccines for low- and middle-income countries throughout the world. And thankfully, Australia has made an in-principle commitment to join.