Well, when we talk about “bees”, we’re usually referring to the European honey bee (its scientific name is Apis Mellifera). Humans have been drooling over its honey and taking advantage of its pollination powers for thousands of years.

So how do these insects make honey, you ask? You’ll find the task is one requiring teamwork and organisation.

You probably already know about the most important ingredient needed to make honey: flowers.

A colony of bees can visit up to 50 million flowers each day, with as many as 60,000 bees in each colony. They’re not called busy bees for nothing!

Honey bees work together as a team to make decisions about where the best flowers are. They communicate with each other using bumps, noises and even dance moves known as the waggle dance.

Some bees do the “waggle dance”.

All bees during their life have different roles, depending on how old they are. To make honey, worker honey bees fly up to 5km searching for flowers and their sweet nectar. Usually, they’ll visit between 50 and 100 flowers per trip.

Read more: One, then some: how to count like a bee

Nectar is the main ingredient for honey and also the main source of energy for bees. Using a long straw-like tongue called a proboscis, honey bees suck up nectar droplets from the flower’s special nectar-making organ, called the nectary.

When the nectar reaches the bee’s honey stomach, the stomach begins to break down the complex sugars of the nectar into more simple sugars that are less prone to crystallization, or becoming solid. This process is called “inversion”.

Once a worker honey bee returns to the colony, it passes the nectar onto another younger bee called a house bee (between 12-17 days old).

House bees take the nectar inside the colony and pack it away in hexagon-shaped beeswax honey cells. They then turn the nectar into honey by drying it out using a warm breeze made with their wings. 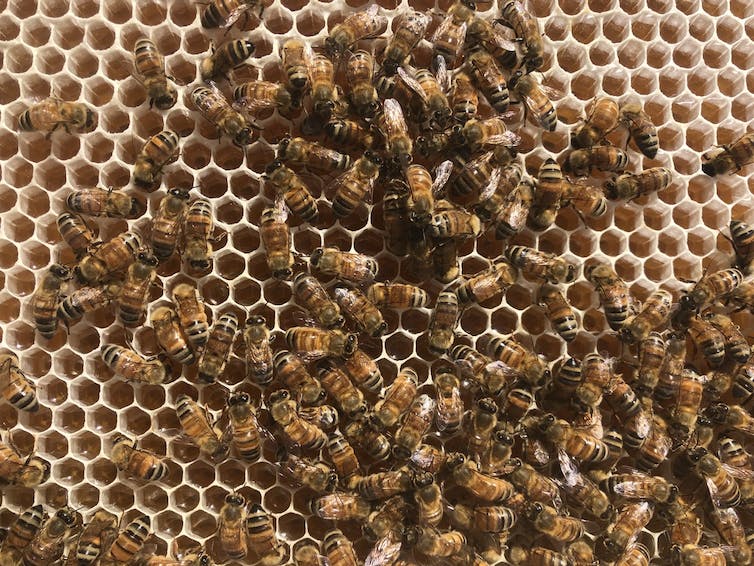 Once the honey has dried out, they put a lid over the honey cell using fresh beeswax – kind of like a little honey jar. In the winter, when the flowers have finished blooming and there’s not as much nectar available, the bees can open this lid and share the honey they saved.

Honey: a food fit for all workers, human and bee

Because nectar comes from flowers, there are hundreds of different types of honey with different colours, smells and flavours. Some honey can even be used as medicine.

Also, bees don’t just collect nectar to make honey. When they visit flowers, they also collect pollen – which is a great source of protein to keep them healthy and strong.

Pollen is a kind of powder which flowering plants, trees and grasses make (and must spread) to help more of the same plants grow around them. Pollen can spread in ways such as being blown around by the air, or being carried between two of the same plant by an insect.

So by transferring pollen between flowers, bees also help pollinate flowers. These often turn into the seeds of the fruit and nuts we eat. In fact, about one-third of the food we eat is pollinated by bees. 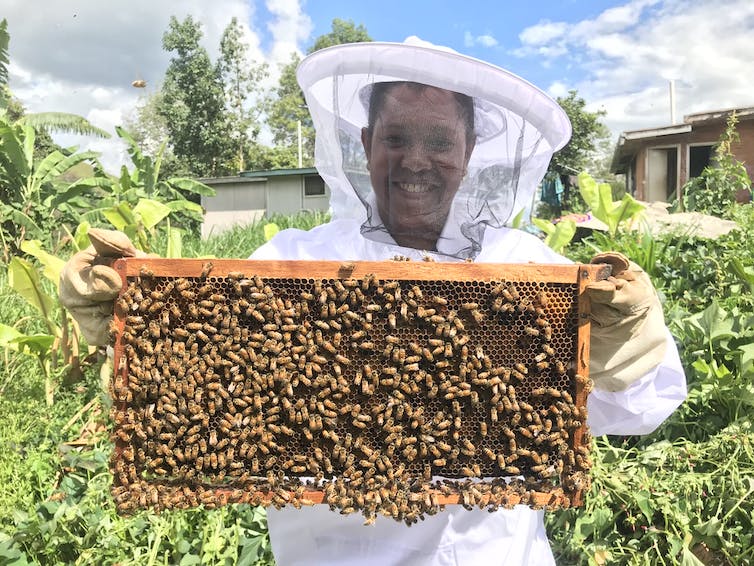 Pollinators around the globe

Did you know the yellow fuzzy honey bee is just one of over 20,000 bee species in the world? There are more than 1,700 in Australia alone, some of which can make honey.

Some native stingless bees only found in Australia, such as Tetragonula carbonaria and Austroplebeia australis, produce honey too. 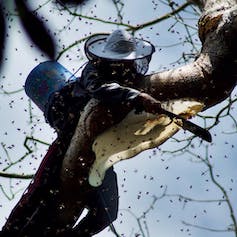 There are also ten other honey bee species overseas, such as the giant honey bee (Apis dorsata) in Nepal and Indonesia, which live at the top of high cliffs and large trees.

There’s also the Eastern honey bee (Apis cerana) which is managed by beekeepers in rural and remote areas throughout Southeast Asia.

There’s never been a better time to put in native flowering plants and stop to smell the flowers. It’s important to remember, just like your puppy or kitten, bees need to be looked after too.