The medical evacuation of Alexei Navalny, the outspoken political critic of Vladimir Putin who was allegedly poisoned last week, has shed more light on his illness.

The Charité – Universitätsmedizin hospital in Berlin said in a statement yesterday:

The patient is being treated in intensive care and remains in a medically induced coma. While his condition is serious, it is not currently life-threatening.

Notably, the hospital states he was poisoned by “a substance from the group of cholinesterase inhibitors”. But what are these, and how can this sort of poisoning be treated?

From pesticides to weapons-grade chemicals

They include many everyday pesticides such as organophosphate and carbamate compounds, which the Australian Pesticides and Veterinary Medicines Authority regulates in Australia.

They also include more exotic weapons-grade chemicals such as sarin, which was deployed in Syria, and novichok, reportedly used to poison two Russian expatriates in Salisbury, UK, in 2018.

In this form, these chemicals are often collectively referred to as “nerve agents”. 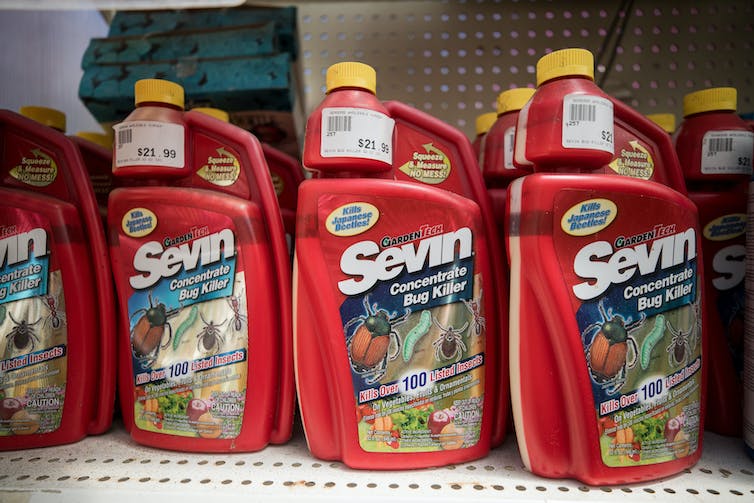 Cholinesterase inhibitors aren’t all chemical weapons — they can include everyday pesticides. Shutterstock

First developed in Germany in the lead-up to World War II, nerve agents are several times more potent, and therefore dangerous, than organophosphate or carbamate pesticides. They’re banned under the Chemical Weapons Convention.

These chemicals can cause harm through simple contact or inhalation, in minuscule quantities. Some reports suggest Navalny was poisoned via a cup of tea, which would also be effective.

It’s no exaggeration to say this group represents the most lethal chemicals humans have ever created.

Read more: Alexei Navalny has long been a fierce critic of the Kremlin. If he was poisoned, why now? And what does it mean?

How do they make people sick?

Under normal circumstances, acetylcholinesterase regulates the amount of a neurotransmitter called acetylcholine (ACh) that crosses our nerve junctions (or synapses), converting electrical signals through the body.

Left unregulated, the effect of cholinesterase inhibitors is a little bit like blocking one of the major “off-switches” of the body. You’re left with all the lights turned “on” and the body quickly runs into trouble.

A rapid build-up of ACh at the nerve junctions leads to the effects we tend to see in nerve agent toxicity, including mucus secretions from the respiratory and digestive tracts, breathing problems, and muscle dysfunction.

Ultimately, death is usually a result of respiratory failure.

How can this poisoning be treated?

It is possible to treat nerve agent poisoning, with a combination of physical and pharmacological interventions. But it is dangerous, and difficult.

Initially, decontamination is critical. Poisoning continues as long as contact with the agent continues, and there’s a risk of contamination for those providing medical care.

The German hospital reports Navalny is currently being treated with atropine. Atropine is used to bind to and blanket ACh receptors, rendering the circulating excess of these neurotransmitters less hazardous.

Health workers can detect whether or not someone has been exposed to harmful cholinesterase inhibitors by taking urine and blood samples.

But as time passes, and the toxin is secreted in the urine, it becomes more difficult to identify exactly what type of cholinesterase inhibitor was the culprit.

The “ghosts” of the poisoning — incapacitated acetylcholinesterase enzymes — are detectable for a longer time, but it can be very hard to link these in isolation to a specific agent. 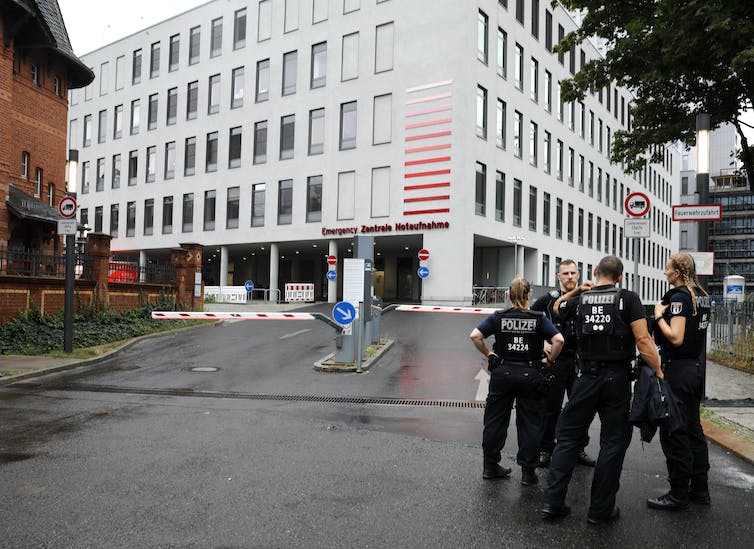 Alexei Navalny is now being treated in a Berlin hospital. Markus Schreiber/AP

Depending on the toxicity of the agent, how much was used, how long patients were exposed, and how they were exposed, enzyme levels can start to return to normal from several days to several weeks after exposure.

The person’s health will improve, but often not back to normal. An intermediate syndrome can last for weeks, and people affected describe this as very debilitating.

A history of exotic poisonings

Critics of the Russian regime and their affiliates seem to have a higher than average chance of succumbing to exotic poisons, compared with the general population.

In 2004, the then Ukrainian president Viktor Yushchenko was poisoned with a chemical called TCDD-dioxin, and left with facial disfigurement.

In 2006 Alexander Litvinenko, a defected ex-FSB agent, was poisoned with radioactive isotope polonium-210.

The attempts on the lives of the Skripal family in Salisbury, with the agent generally assumed to be novichok, has probably been the highest-profile poisoning in recent years.

In the case of Navalny, it’s very unlikely the specific agent used will ever be proven. But his case does share common ground with these others.

To assume all of these attempts were necessarily at the personal behest of the Russian leader is probably too long a bow to draw. But it would be reasonable to assume someone in an inner coterie was involved each time — if only to access such sophisticated weapons of assassination.