The Black Lives Matter protests have highlighted concerns about white-dominated systems and structures and the oppression of Indigenous people. Most notable is the high rate of Aboriginal and Torres Strait Islander deaths in custody.

Another less-publicised but equally significant concern is the large number of Indigenous children in out-of-home care. This is currently estimated at 18,000 children — more than one-third of children in the system.

An estimated 1,140 Indigenous young people leave out-of-home care annually, but state and territory governments provide limited assistance to them to transition to independent adulthood or reconnect with their culture and community.

There are several factors that help explain the large number of Indigenous children in out-of-home care. Many of these are rooted in past policies of forced removal of children from their homes, which caused inter-generational trauma for many Indigenous communities and resulted in enduring socio-economic disadvantage.

For example, research on children living in households with members of the Stolen Generations has found they experience a range of adverse outcomes, such as poor health, high stress and frequent non-attendance at school.

On a positive note, the over-representation of Indigenous children in out-of-home care has recently been included in the new Closing the Gap targets, with an aim to reduce the rate by 45% by 2031. 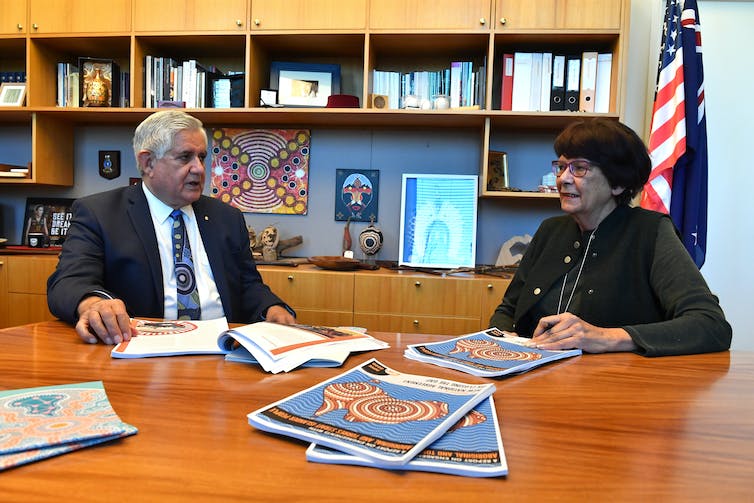 The new Closing the Gap targets have set an ambitious goal for reducing the number of children in out-of-home care. Mick Tsikas/AAP

Lack of basic data on Indigenous children in care

Little is known about the experiences of Indigenous children in out-of-home care, or the effectiveness of existing services to support their transition to adulthood.

Young people transitioning from out-of-home care (known as “care leavers”) are generally a vulnerable group due to their difficult childhoods, problematic experiences in care and accelerated transitions to adulthood. On top of that, many Indigenous care leavers face dislocation from culture and kinship structures, as well as racism.

There is even a lack of clarity about the number of Indigenous young people leaving out-of-home care each year. It appears Indigenous youth make up about one-third of all children leaving care, but there are discrepancies between the figures provided by the Australian Institute of Health and Welfare and the states and territories.

It is also uncertain whether this data includes young people who return to live with their families, as well as those who transition into so-called “independent adulthood”.

As a first step, we need a nationally consistent system for collecting this data in order to adequately address their needs.

Our national study of Indigenous care leavers has identified major deficits in our existing support services, programs and policies to help them, too.

Firstly, there is little funding specifically set aside for these young people, despite the widespread recognition of their unique cultural needs and disadvantages.

International research shows that providing Indigenous young people with connections to culture and community can help make transitions from care much smoother.

Yet, in Australia, we found many Indigenous youth either do not have transition plans when exiting care, or the plans are inadequate. This contributes to poor outcomes for these care leavers, including a risk of homelessness and imprisonment. For young women, there is also the threat of family violence, early pregnancy and removal of their children.

Many Indigenous youth also prefer to live with family members rather than live alone. So, another challenge for Indigenous care leavers is accessing stable and affordable housing that is culturally appropriate.

And many young people exit care and take on responsibilities, such as caring for younger siblings or other family members, without having acquired basic independent living skills, such as cooking and budgeting. Many also struggle to access education and employment.

How can we better help Indigenous care leavers?

So, what does a good transition plan look like? We’ve arrived at several recommendations:

It is highly preferable that Aboriginal community-controlled organisations be responsible for transition plans as they understand Indigenous youths’ cultural needs. These organisations need to be funded proportionately to develop effective leaving care programs.

Additionally, there is a strong belief the National Framework for Protecting Australia’s Children should include a new commissioner for Indigenous youth to oversee a national strategy for care leavers. This strategy should also adhere to the Aboriginal and Torres Strait Islander child placement principle.

Lastly, greater emphasis should be placed on early, supportive intervention for Indigenous families to prevent the removal of children in the first place, or to enhance the prospects of children’s reunification with their families at a much younger age.