Humans have long been inspired and transfixed by the Moon, and as we’re discovering, moonlight can also change the behaviour of Australian wildlife.

A collection of recently published research has illuminated how certain behaviours of animals – including potoroos, wallabies and quolls – change with variation in ambient light, phases of the Moon and cloud cover.

Read more: How big is the Moon? Let me compare ...

One study found small mammals were more active on cloudy nights. Another found variation in moonlight led to differing amounts of species captured in non-lethal traps. And a study on willie wagtails found males just love singing on a full moon.

These findings are interesting from a natural history perspective. But they’ll also help ecologists and conservation scientists better locate and study nocturnal animals, and learn how artificial light pollution is likely changing where animals can live and how they behave.

Most of Australia’s mammals are nocturnal, and some smaller species are thought to use the cover of darkness to avoid the attention of hungry predators. However, there’s much we don’t know about such relationships, especially because it can be difficult to study these interactions in the wild. 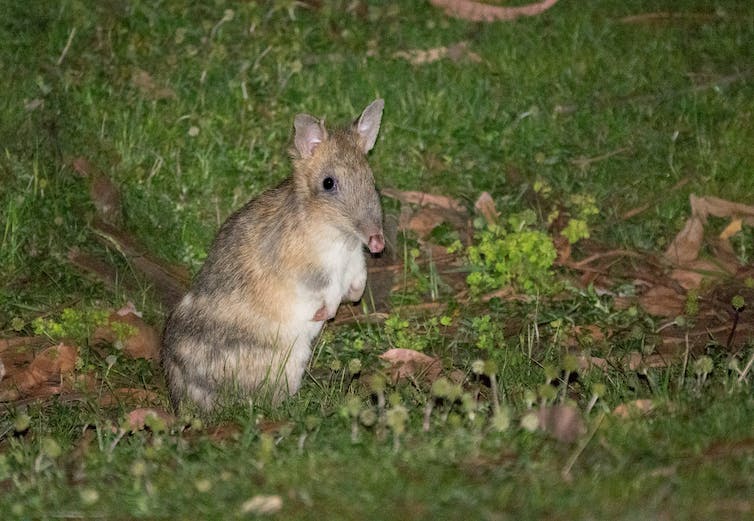 In the relatively diverse mammal community at Mt Rothwell, Victoria, we examined how variation in ambient light affected species’ activity, and how this might influence species interactions. Mt Rothwell is a fenced conservation reserve free of feral cats and foxes, and with minimal light pollution.

Over two years, we surveyed the responses of predator and prey species to different light levels from full, half and new moon phases.

Read more: One little bandicoot can dig up an elephant's worth of soil a year – and our ecosystem loves it

Just as we predicted, we found that while there does appear to be relationships between cloud cover, Moon phase and mammal activity, these interactions depend on the sizes and types of mammals involved. 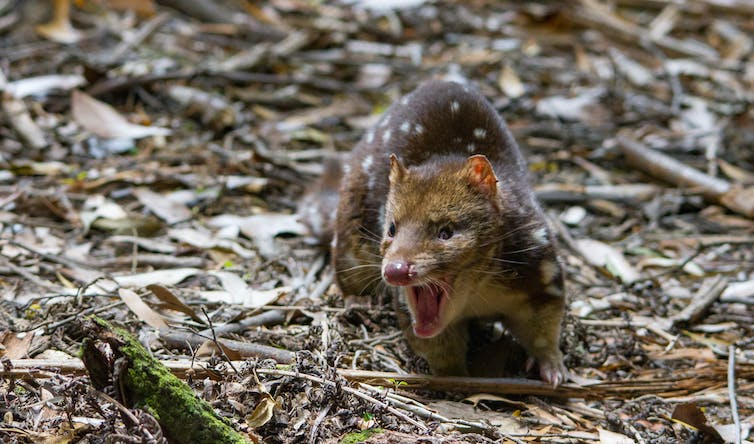 This suggests their deadly game of hide and seek might intensify on darker nights. And prey might have to trade off foraging time to reduce their chances of becoming the evening meal.

What happens in the wild?

It’s important to acknowledge that studies in sanctuaries such as Mt Rothwell might not always reflect well what goes on in the wild, including in areas where introduced predators, such as feral cats and red foxes, are found. 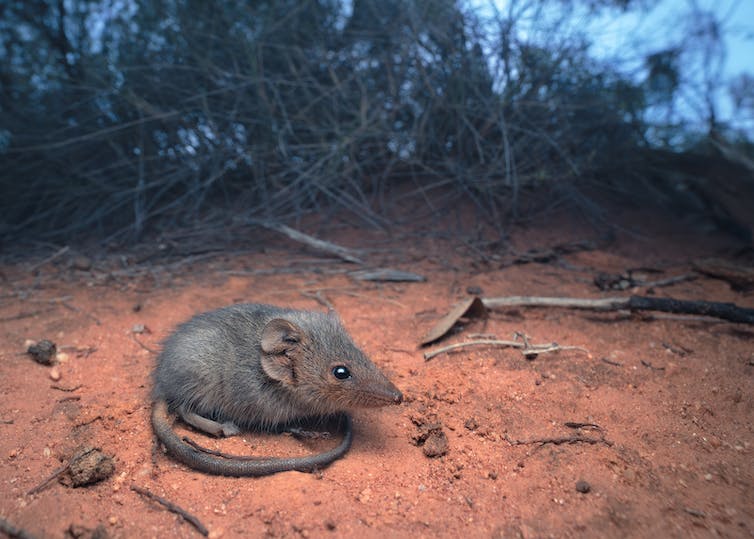 Ningauis are less likely to be caught in ecological surveys with increasing moonlight. Kristian Bell

Pitfall traps are long fences small animals can’t climb over or through, so follow along the side until they fall into a bucket dug in the ground. Ecologists typically use these traps to capture and measure animals and then return them to the wild, unharmed.

Read more: Eastern quolls edge closer to extinction – but it’s not too late to save them

At more than 260 sites and over more than 50,000 trap nights, they found wind speed, temperature and moonlight influenced which species were caught and in what numbers. 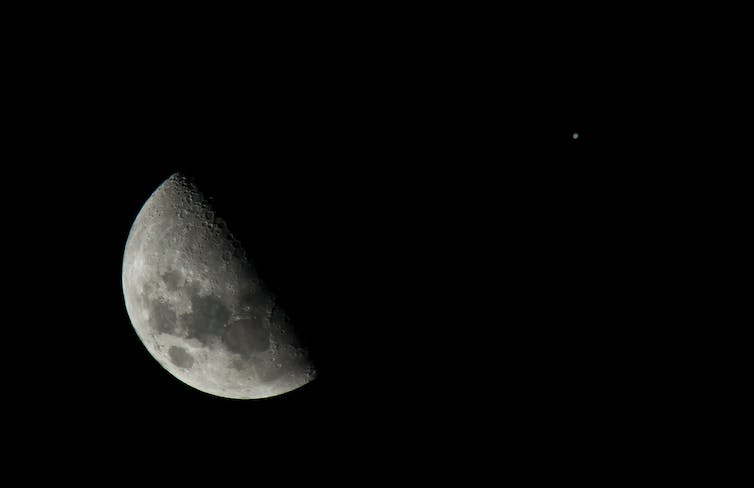 Variation in the moon phase and associated light can change how active mammals are. Aaron Greenville

Research from last month has shown even species normally active by day may change their behaviour and activity by night.

It’s not uncommon to hear bird song by night, including the quintessentially Aussie warbling of magpies. Using bioacoustic recorders and song detection software, these researchers show the willie wagtail – another of Australia’s most recogisable and loved birds – is also a nighttime singer, particularly during the breeding season.

While both male and female wagtails sing by day, it is the males that are most vocal by night. And it seems the males aren’t afraid of a little stage-lighting either, singing more with increasing moonlight, with performances peaking during full moons. 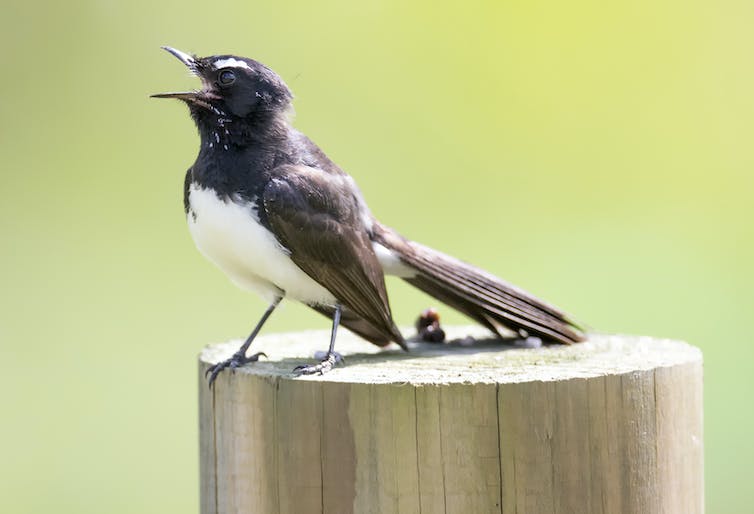 While characteristically playful by day, male willie wagtails can really turn on a vocal performance by night. Jim Bendon/Flickr

This work provides insight into the importance and potential role of nocturnal song for birds, such as mate attraction or territory defence, and helps us to better understand these behaviours more generally.

These studies, and others, can help inform wildlife conservation, as practically speaking, ecological surveys must consider the relative brightness of nights during which work occurred.

Depending on when and where we venture out to collect information about species, and what methods we use (camera traps, spotlighting, and non-lethal trapping) we might have higher or lower chances of detecting certain species. And this might affect our insights into species and ecosystems, and how we manage them. 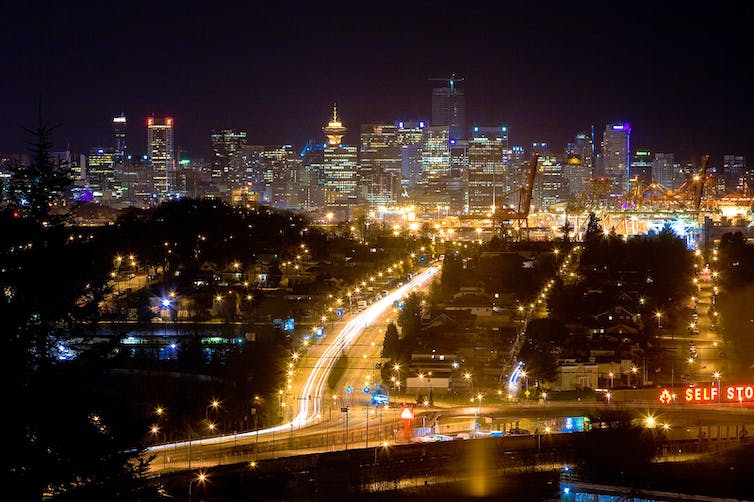 Artificial lighting can change the behaviour of wildlife. Kenny Louie

As dark skies become rarer in many places around the world, it also begs a big question. To what extent is all the artificial light pollution in our cities and peri-urban areas affecting wildlife and ecosystems?

Pipistrelle bats, for example, will be roughly half as active around well-lit bridges than unlit bridges. They’ll also keep further away from well-lit bridges, and fly faster when near them.

This means artificial light might reduce the amount and connectivity of habitat available to some bat species in urban areas. This, in turn could affect their populations.

Research is underway around the world, examining the conservation significance of such issues in more detail, but it’s another timely reminder of the profound ways in which we influence the environments we share with other species.

We would like to acknowledge Yvette Pauligk, who contributed to our published work at Mt Rothwell, and that the traditional custodians of this land are the Wathaurong people of the Kulin nation.