As violent clashes have escalated between right- and left-wing protesters in the US city of Portland, President Donald Trump has sharpened his rhetoric against what he calls the “left-wing violent extremism” engulfing American cities.

In an interview this week, Trump alluded to “thugs wearing […] black uniforms with gear” flying around the country, which Vice President Mike Pence later attempted to clarify by saying

there’s something going on here, where the radical left, these anarchists and Antifa are moving people around the country.

This comes after US Attorney General William Barr claimed the left-wing, anti-fascist movement Antifa was engaged in domestic terrorism and “will be treated accordingly”. Trump has also vowed to deem Antifa a terrorist organisation.

Last week, a right-wing protester was fatally shot in Portland and police are now investigating whether a self-described anti-fascist allegedly motivated by Antifa principles was involved. The suspect was shot dead by police when they tried to arrest him days later.

But research shows the threat posed by far-right extremist groups far exceeds that of other groups, including left-wing networks and attackers inspired by Islamist extremism.

Far-right extremists were behind two-thirds of the attacks and plots in the US in 2019 and more than 90% in the first half of this year.

Left-wing ideology has also inspired terrorism in the past, and indeed, left-wing terrorism remains a real contemporary threat.

But Antifa does not yet represent a terror threat by virtue of its organisation and activities. As it stands, it falls below the conventional thresholds for terrorism. 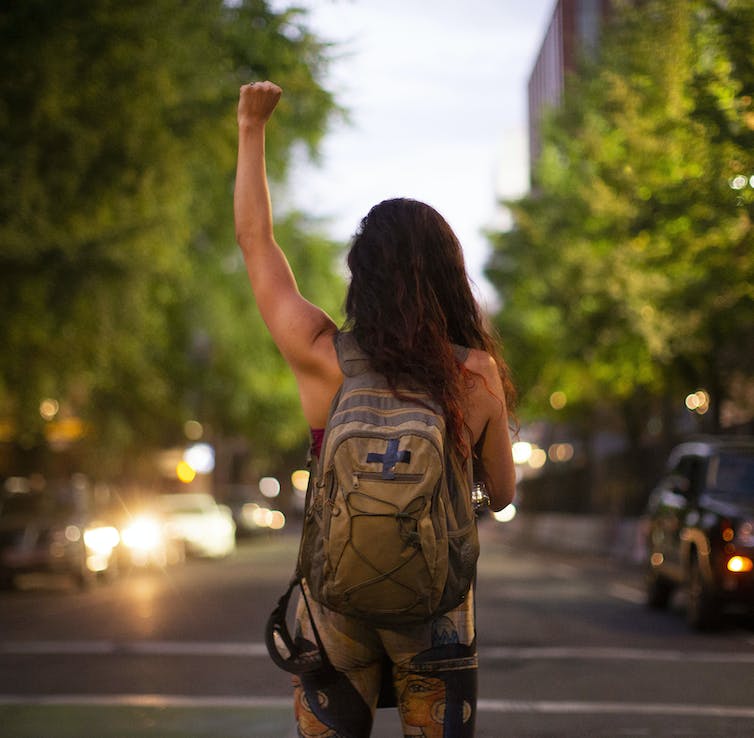 The Portland protests have drawn a mix of activists — some violent, others not. Beth Nakamura/AP

Antifa (short for “anti-fascist”) is a highly decentralised, oppositional social movement. It encompasses many autonomous groups, networks and individuals. What binds them together is a rejection of fascism and fascist ideas, including white supremacy.

Antifa is not a homogeneous entity, and has no identifiable command structure, leadership apparatus or radicalised membership. To designate Antifa as an “organisation” is to misconstrue the present reality of the movement.

Antifa engages in a wide variety of political activism, including doxxing (releasing people’s personal details online) and protests like those seen in Portland.

Not all Antifa activists are opposed to violence, as historian Mark Bray details in his book, Antifa: The Anti-Fascist Handbook. Activists have been known to use noxious gases, projectiles and other forms of violence at protests. However, they have traditionally stopped short of lethal acts.

The past can help us understand the present

To understand the roots of Antifa’s activism, we must first compare it to left-wing terrorism more broadly.

The heyday of left-wing extremism was during the “New Left” wave of terror from the 1960-80s. These terrorists opposed the Vietnam War and western imperialism, and stood in solidarity with left-wing revolutionaries like Võ Nguyên Giáp, Mao Zedong, Che Guevara and Carlos Marighella.

In the US, the Weather Underground Organisation claimed credit for 25 bombings, some targeting the Pentagon, the New York Police Department and the US Capitol. The Symbionese Liberation Army famously kidnapped the actress Patty Hearst, while the female-led May 19th Communist Organization bombed an FBI office and the US Capitol.

What united these actors was the belief they were retaliating against oppression and injustice. Terrorism became a tactic essential to that mission.

In recent years, left-wing terrorism has been limited. In the US, left-wing attacks peaked in the early 2000s when eco-terrorists like the Animal Liberation Front and Earth Liberation Front targeted research centres and other businesses, but have been in decline since then.

Since 2009, left-wing terrorists were responsible for just 2% of attacks in Europe, paling in comparison to jihadists (69.3%) and right-wing extremists (21.8%).

Why Antifa is not a terrorist movement

So far, the Antifa movement has simply not met the conventional threshold for terrorism.

Terrorists use politically motivated violence to achieve two main goals: to gain support and coerce their targets. Terrorists typically use lethal violence and intimidation to exert power, which compensates for their perceived political weakness.

According to experts, the types of actions that typically qualify as terrorism are bombings, shootings, assassinations, kidnappings and hijackings. Terrorism does not necessarily need to be spectacular violence that draws attention; it can also be smaller acts of violence committed for ideological reasons.

By contrast, protest movements achieve power and seek to persuade decision-makers through popular support. Protesters largely act within the constraints of democratic, albeit contentious, politics. While violence is not uncommon at protests, it tends to be sporadic and reactive. 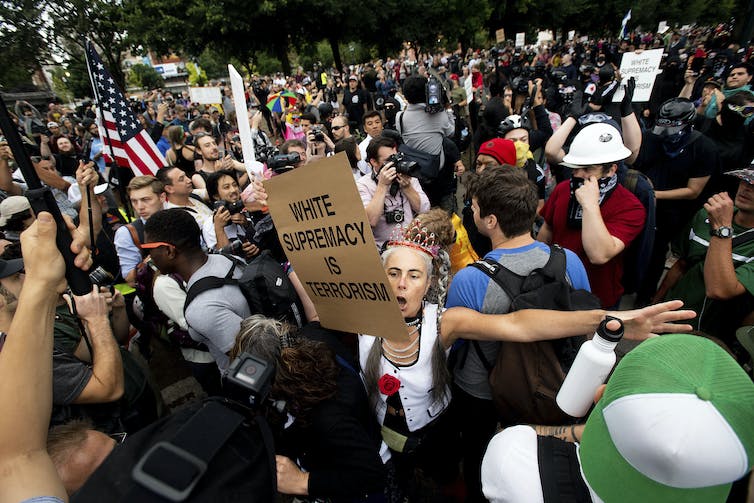 While Antifa has previously engaged in low-level violence, such as street skirmishes and obstructing right-wing demonstrators, it lacks organisational coherence and a meaningful command structure. This limits the likelihood of organised and sophisticated violence akin to terrorism.

However, this does not stop lone actors inspired by Antifa principles from engaging in unsophisticated, individual attacks. These attacks generally occur on the fringes of the greater movement.

Most terrorism researchers have also rejected the idea that Antifa constitutes a terrorist threat, instead comparing them to gangs, militants or activists.

The danger of conflating protests with terrorism

For one, it undermines a central pillar of any functional, democratic system: the right to protest.

It also suppresses or manipulates legitimate dissent to serve an secondary agenda — in the case of Trump, to paint Democrat-controlled cities as out of control. 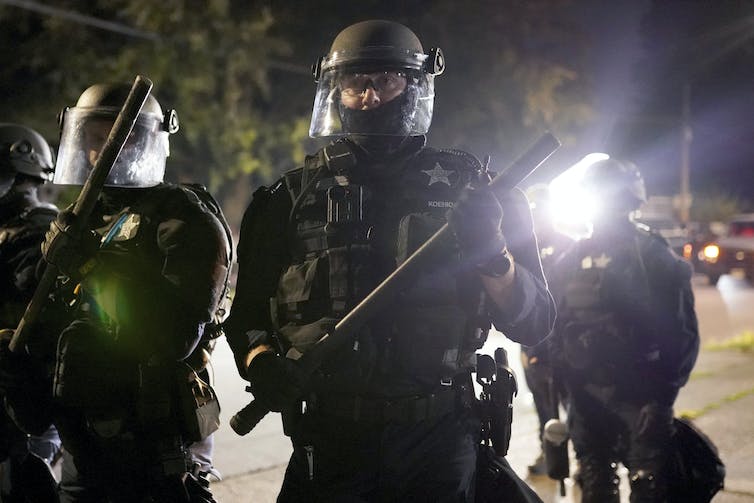 The Trump administration has come under fire for its securitised response to the protests. Nathan Howard/AP

When the Trump administration threatens to designate Antifa a terrorist organisation or send federal forces to cities to quell violent protests, it also diverts resources away from other high-priority threats.

This includes right-wing extremism, which has claimed dozens of lives in the past year in places like Christchurch, El Paso and elsewhere.

This is not an “either/or” situation — the threats from both right- and left-wing groups must be countered. But governments must allocate resources based on the actual threat they represent, rather than political rhetoric.

The political appeal of labelling oppositional protesters as terrorists must not outweigh the risks it poses to democratic principles.

In the current international security environment, there are many threats to democracy, but in order to truly safeguard it, we need to fiercely defend the rights of citizens to protest and voice dissent.

UPDATE: The story was updated on September 4 to add the suspect in the Portland shooting being killed by police during an attempted arrest.