On Sunday, the Australian government announced it would put A$6 million towards the research and development of three local COVID-19 vaccine candidates, via the Medical Research Future Fund.

Let’s take a look at these different approaches.

Read more: From adenoviruses to RNA: the pros and cons of different COVID vaccine technologies

I’m part of the Monash team working with scientists at the Doherty Institute on both the protein vaccine and the mRNA vaccine. Although we initially developed these vaccine candidates separately, they target a similar part of the virus — so we’ve now joined forces to further develop the two together.

Until now, vaccine candidates, such as those developed by the University of Queensland and the University of Oxford, have generally used the entire spike protein as a target. The spike is a large protein found on the surface of SARS-CoV-2, the virus that causes COVID-19.

A region at the tip of the spike called the “receptor-binding domain” enables the virus to establish itself by binding to our cells and causing infection.

Instead of vaccinating against the “whole” spike protein, our approach is unique in that it uses the receptor-binding domain tip.

The subunit protein vaccine contains the receptor-binding domain from SARS-CoV-2 as the antigen, or target. Exposing our immune system to this protein is intended to create antibodies that generate immunity against this part of the virus, protecting us if we encounter SARS-CoV-2 in the future. 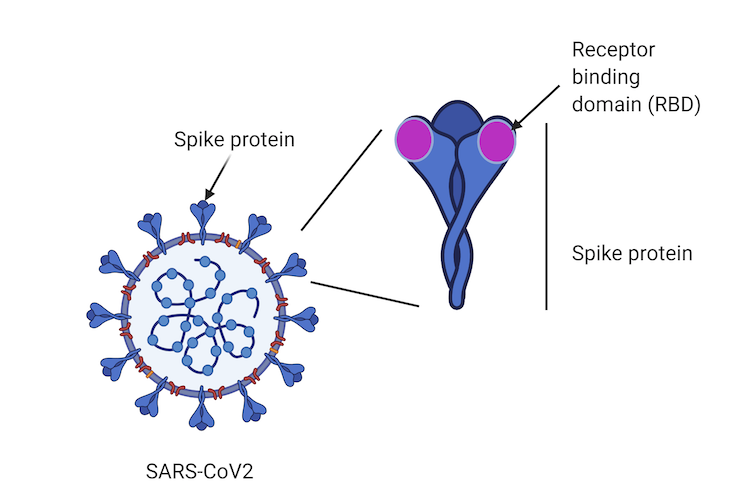 The subunit protein vaccine and the mRNA vaccine both target the receptor-binding domain, a region at the tip of the spike protein. Created with BioRender.com, Author provided

We’re exploring the two vaccine options simultaneously. One may prevail as the most promising candidate. It’s also possible one candidate might be the primary vaccine and the other could serve as a booster — it’s still early to tell.

The funding we’ve received will support the development and manufacturing of the two candidates with the intention to enter phase 1 human trials next year if the vaccines prove promising in mice and monkeys. Early results are encouraging.

Notably, both of these vaccines can be produced and manufactured rapidly. For example, within three weeks of receiving the genetic sequence of SARS-CoV-2, we were able to produce three mRNA vaccine candidates.

This flexibility of the Doherty/MIPS approach will be particularly important if COVID-19 mutates into a new strain, and could also be useful for vaccine development in future pandemics.

Read more: The Oxford deal is welcome, but remember the vaccine hasn't been proven to work yet

The third COVID-19 vaccine candidate uses DNA technology. A DNA-based vaccine works in a similar way to an mRNA vaccine. By producing the viral antigen inside us, mRNA and DNA vaccines teach our immune system to recognise the antigen should the virus invade in the future.

DNA vaccines have been under development for roughly the past 20 years. While they’re safe, their effectiveness remains in question. So the University of Sydney scientists are rethinking the way they’re delivered.

The previous DNA vaccines relied on a standard needle and syringe delivery, but the University of Sydney’s innovative approach uses a needle-free device. This method will deliver the vaccine using a “liquid jet” to penetrate our skin.

Needle-free delivery improves the distribution of the DNA vaccine deeper into the injected site, which can improve the vaccine’s effectiveness. 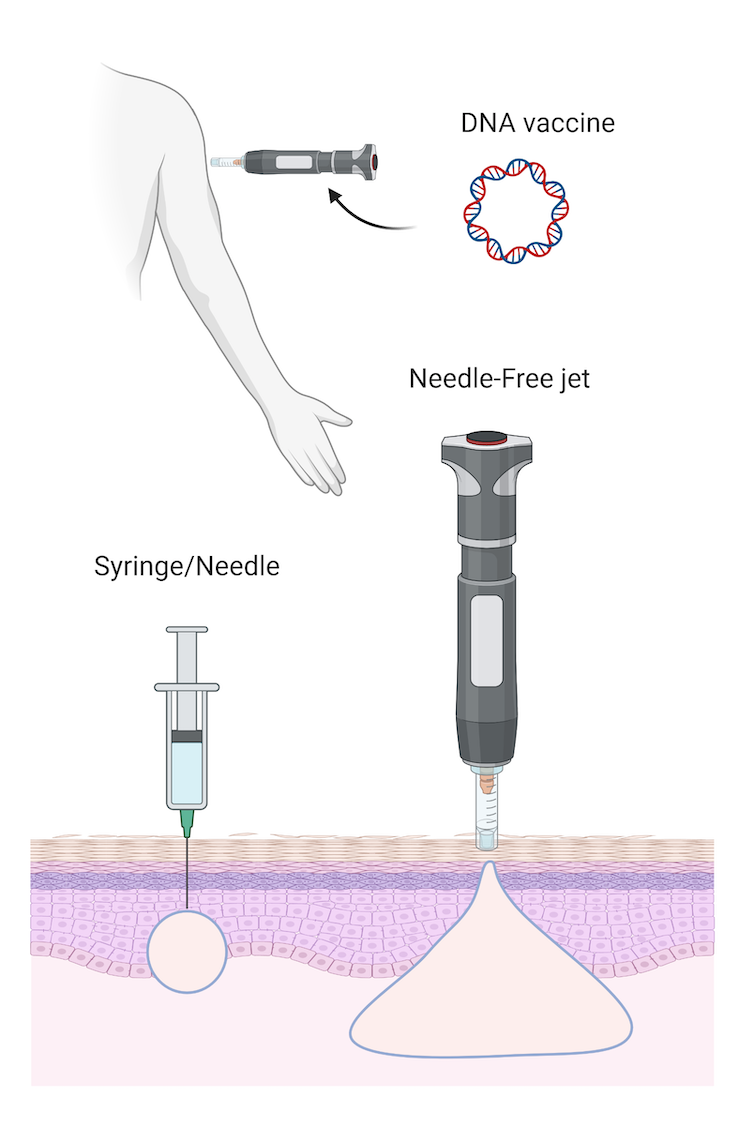 Needle-free technology can facilitate a better distribution of vaccines once injected. Created with BioRender.com, Author provided

The University of Sydney group will aim to recruit 150 volunteers for a phase 1 clinical trial using the needle-free jet system.

The technology is already used to deliver some influenza vaccines. The technology may later be taken up for other COVID-19 vaccine candidates — including mRNA and proteins — if the needle-free system proves safe and effective.

Naturally, another key advantage of this approach is the absence of needles. This may improve vaccine acceptance in some groups, including children.

The importance of local vaccine development

Investing in vaccine technologies will be essential for Australian public health, biosecurity and economic independence.

First, it’s unclear whether the current COVID-19 vaccines in phase 3 clinical trials will provide adequate protection. If they do, it’s similarly unclear how long that protection will last. Continued investments in a variety of vaccines at different stages of the development pipeline will ensure we have the best collection of vaccine technologies at our disposal.

Second, some of the development efforts could later yield a significant return on investment if they prove successful. Australia has an evolving biomanufacturing and biotechnology sector, and investment into these areas will benefit the next chapter of our country’s economic recovery.

Correction: this article previously stated it’s possible the scientists would combine both the mRNA and subunit protein vaccines into a one-shot product. This is not something the team at Monash University and/or the Doherty Institute are investigating as part of their forthcoming trial, so this has been removed.