Much of the debate on New Zealand’s referendum on recreational cannabis legalisation has focused on health, the economy, criminal justice and the uncertainties about the impact on youth and adult use.

But one argument is oddly missing from the debate — personal freedom, autonomy and individual rights.

This is striking, because the issue of personal liberties has traditionally been at the forefront of cannabis reform activism. At the heart of all public health laws is the conflict between the powers of the state and the individual’s liberty, privacy and autonomy.

In the past two years, constitutional courts in several countries have ruled the prohibition of use, possession and private cultivation of cannabis interferes with an individual’s right to privacy. They’ve said protecting public health and security does not justify state punishment.

It may come as a surprise, but about half of the countries in Europe do not prohibit the use of drugs (as New Zealand does). Instead, they choose only to ban their possession.

The difference is more than academic. Prohibition of consumption may give police extraordinary powers, such as taking biological samples from people as evidence. Drug testing is intrusive and should only be done if there is a significant public interest to protect.

Read more: If reducing harm to society is the goal, a cost-benefit analysis shows cannabis prohibition has failed

Some countries go even further. They ban possession and use of drugs, but only in public spaces, on the understanding that drug laws exist to prevent public nuisance.

In Spain, the distinction between use in public and private led to the so-called “cannabis social clubs”. Users grow and share cannabis among club members in private settings. 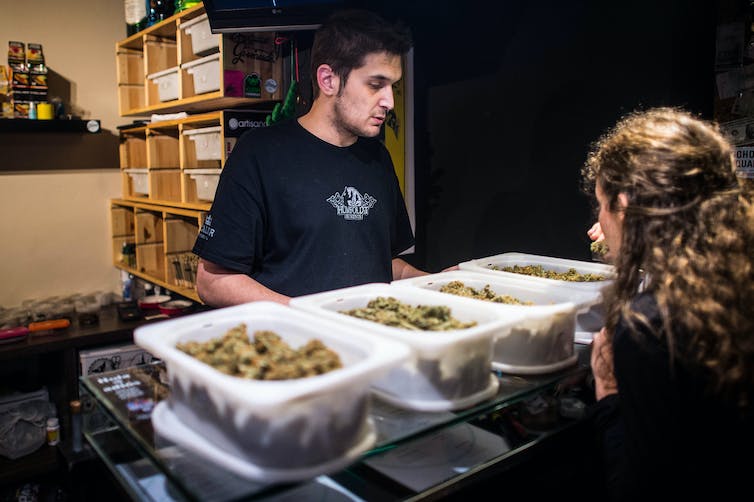 A ‘cannabis social club’ in Spain: one way to get around laws governing public and private use of the drug. GettyImages

The rights and the risks

The fundamental personal right to ingest a substance that has little impact on others has long been argued by cannabis activists such as NORML (National Organisation for the Reform of Marijuana Laws).

With this argument largely absent from current debate in New Zealand (as well as many other jurisdictions contemplating reform), debate focuses instead on the potential to create jobs and tax revenue (Colorado), reduce arrests and discrimination (Illinois), address public security and drug-related violence (Uruguay) and restrict youth access to cannabis and enhance public health (Canada).

Read more: It could take 10 years to measure the impact of legalising weed – should New Zealand's proposed law be even stronger?

The aim of New Zealand’s proposed Cannabis Legalisation and Control Bill is to apply market controls to reduce harms associated with cannabis and restrict access by young people. But, as we have argued before, the goal of reducing overall use over time will be hard to achieve via a commercial market.

The personal rights argument can struggle to win over people concerned about the health and social implications of legalisation, especially given their experience of other public health debates.

The alcohol industry, for example, pushed individual rights and consumer responsibility to undermine effective public health measures such as higher taxes and bans on advertising.

The assumption all adults can make responsible choices about using psychoactive drugs is also challenged. There are risks of dependency that could interfere with personal autonomy, and the psychological influence of marketing that targets vulnerable groups such as the young and poor.

There is a fine line between respecting people’s right to choose and facilitating the normalisation and commercialisation of something that could lead to poor public health.

The use of any psychoactive substance carries the potential to harm personal and family relationships, and cause unsafe driving or workplace accidents. This reinforces the argument that some degree of regulation and state intervention will always be necessary.

The age-old question is how best to balance the powers of the state with individual rights to privacy and autonomy, while protecting public health and vulnerable groups. 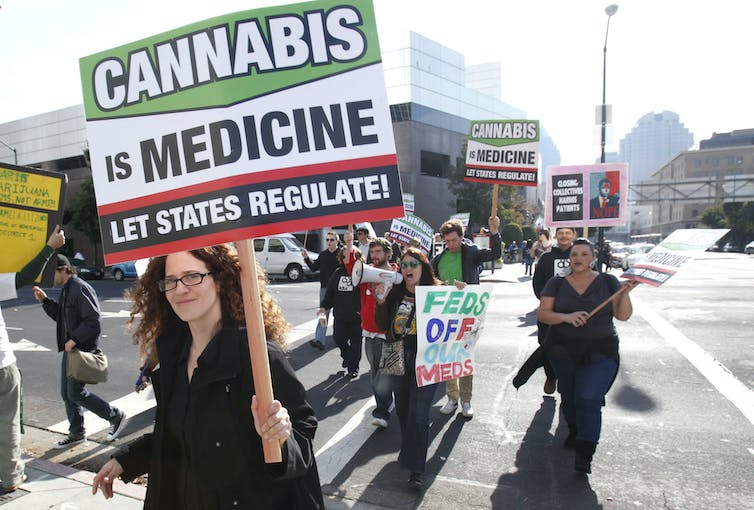 Protesting for legal medicinal cannabis use in California before the law was changed. AAP

The absence of recreational users’ voices

Society appears more receptive to the personal right to use medicinal cannabis.

Despite the (as yet) limited scientific evidence for the effectiveness of cannabis in medical treatment, greater legal availability of medicinal cannabis attracts good public support. This is largely based on respecting a person’s decisions about how to treat their illness.

The right to use cannabis recreationally requires decision makers to consider the benefits people get from its use, such as pleasure or relaxation. But this is often forgotten or avoided in drug reform debates.

Including more voices from recreational cannabis users could provide new ways of thinking about balancing the powers of the state with individual rights.

Given the current uncertainties about the long-term health and social impacts of legalisation, the individual rights issue may actually be among the more convincing arguments for reform.

Q: What do you think? Do people have a right to use cannabis for recreational purposes, in public or private? Post your comment below and be part of The Conversation.