The state of emergency that has been issued in Victoria during the pandemic is to be taken seriously. Police are undoubtedly one component of the state’s health response, needed to enforce measures to prevent the spread of COVID-19 such as restrictions on group gatherings and curfews.

However, a bill before the Victoria parliament to expand the police’s authority during the emergency is a worry.

This bill would provide police and other “authorised officers” with unprecedented, extraordinary powers and rely too heavily on a punitive approach to controlling the coronavirus, with too few checks and balances.

The government maintains these powers are necessary in the context of the COVID-19 health emergency to “keep protecting Victorians” and “enforce laws that kept case numbers low”.

But the bill is out of balance, even in a time of emergency.

There are three key concerns with the bill:

Among other things, the bill provides police and other authorised officers with the power to preemptively detain “high-risk” Victorians, defined as those who have COVID-19 or are a close contact of a person with the virus.

Perhaps most worrisome is this power can be applied in cases where the authorised officer has a “reasonable belief” a person “is likely to refuse or fail to comply with” an order to self-isolate.

There is no direction in the bill as to what would constitute “reasonable belief” or how this would be assessed. 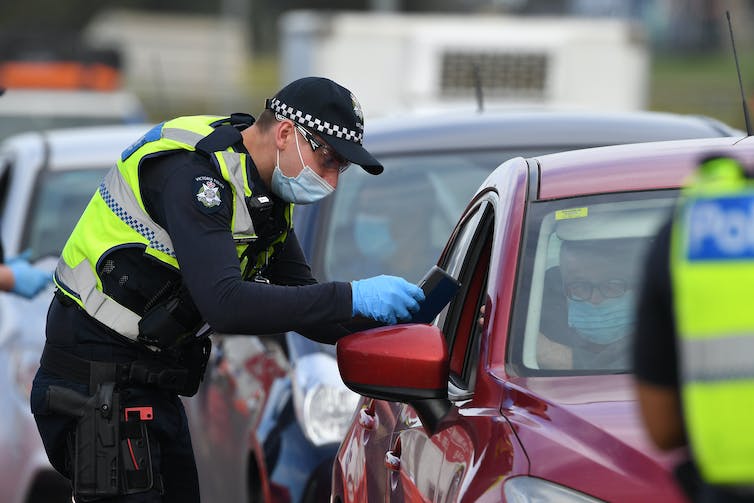 The police maintain their widespread use of checkpoints and park surveillance are keeping the community safe. James Ross/AAP

The other concerning element of this is the open-ended timeframe of detention, which the bill only specifies as the

Again, this is linked to the same unspecified reasonable belief that a person is likely to be non-compliant with orders to self-isolate.

This extraordinarily wide discretion for authorised officers to decide who to detain and for how long appears contrary to Victoria’s Charter of Human Rights, which states

a person must not be subjected to arbitrary […] detention.

The bill dramatically expands the types of people who can be appointed as authorised officers, including state officials, non-government workers, WorkSafe inspectors and protective service officers.

The breadth of these discretionary powers becomes more problematic when you consider these authorised officers are to be appointed on broad and generic criteria and are not necessarily health experts.

People should not be detained on the basis of a non-expert belief they are likely to be non-compliant with a health direction.

Health-led responses that provide people with the necessary information, support and services to stay safe and self-isolate have proved more than effective.

Read more: Pandemic policing needs to be done with the public's trust, not confusion

There is a long history in Australia of over-policing of minorities and marginalised groups, especially Aboriginal and Torres Strait Islander people, other people of colour, young people and public housing tenants.

The police enforcement of COVID-19 rules has broadly followed this pattern, with a disproportionate focus on lower socio-economic areas.

There is also the issue of police brutality and excessive use of force against suspected rule-breakers and those suffering mental health crises.

The proliferation of mobile phone cameras, body-worn cameras for police officers and CCTV cameras has brought a new, confronting visibility to these incidents. This includes the recent case in suburban Melbourne of a man suffering from a mental illness who was hit by a police car and then appears to have had his head stomped on by an officer.

There is a lack of substantive, robust, independent oversight of police in Victoria. Currently, the police investigate complaints of corruption and misconduct (including use of force) by their own officers in 98% of cases. This contributes to a situation where there are few effective avenues to hold police to account.

A parliamentary committee has recommended the state anti-corruption watchdog investigate allegations of serious police misconduct instead. But Andrews government has yet to respond to the 69 recommendations in the report, which was tabled more than two years ago.

Read more: New body for complaints against police in Victoria is a good move, with some caveats

The new bill to expand emergency policing powers provides no mention of police oversight or a review of the powers, which is also troubling.

In a letter outlining its concerns with the bill, the Victorian Bar argues any use of the “extraordinary and personal detention” powers be reviewed by the chief health officer (or a senior delegate) within 24 hours. The letter read, in part,

unconstrained and undefined subjective powers naturally invite the tendency to exercise them to the fullest, and in breach of human rights. 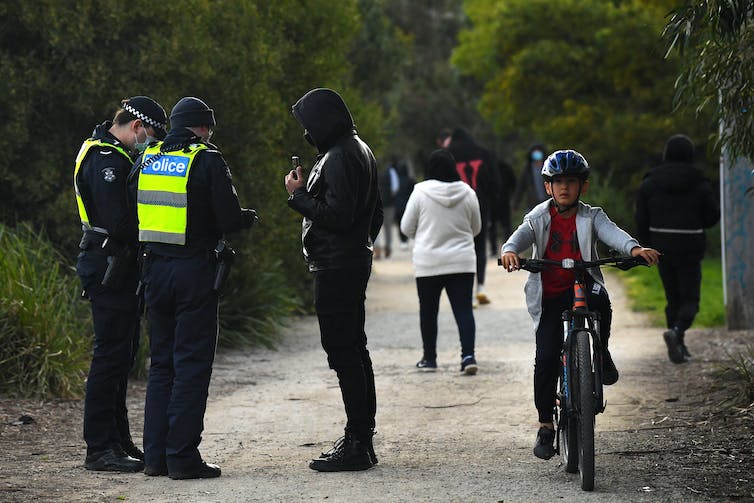 Authorised officers already have expanded powers during a state of disaster. James Ross/AAP

Little evidence of the need for expanded measures

The state of emergency in Victoria is unprecedented and has required extraordinary sacrifices from millions of Victorians. These sacrifices, unwelcome and as painful as they are, have had the support of the majority of Victorians.

But these proposed powers are qualitatively different. There has been little if any evidence of the rationale for these measures, only broad and generic statements from government. The measures are a dangerous threat to the health of democracy.