The 2020 Archibald, Wynne and Sulman Prizes, held under the strangest of all circumstances, has produced a neat piece of history.

In 1956 Sir William Dargie, best known for his academic paintings of prominent Australians, won the Archibald for his painting the Aboriginal artist, Albert Namatjira. This year’s Archibald winner is by the subject’s great-grandson, Vincent Namatjira.

Namatjira junior’s subject is a double portrait of himself with Adam Goodes called Stand strong for who you are. The painting, in Namatjira’s characteristic style, shows the two firmly clasping hands.

In the background we see Goodes the champion footballer, Goodes responding to racial vilification, and Goodes standing firm with the Aboriginal flag. Blood red footprints are the record of the path they have walked. This is the art of a generation of Aboriginal people who will not accept being downtrodden.

Read more: 'The most refreshing Archibald exhibition I can remember': the 2020 portrait prize finalists

More than an art prize

It is worth noting the trustees, laid down by Jules François Archibald’s will as judges of the prize which he established, are (with two exceptions) non-artists. Their choice is more than purely aesthetic.

I have long argued the Archibald is in essence a social history prize, not an art prize. In announcing the first Indigenous winner in the prize’s history, this year the guardians of New South Wales’ visual cultural heritage are proclaiming the value of integrity, and for Aboriginal people to stand proud. They are also indicating it is no longer a given white men of a certain class are entitled to take the prize. As fine as this painting is, it is not as strong as his 2018 entry Studio self portrait, which later entered the gallery’s collection. That showed his studio, his love of Chuck Berry, and in the background the always present legacy of Albert.

Albert Namatjira’s legacy is seen throughout all the prizes. Every Aboriginal artist I know is aware of how he appropriated the grammar of Western art to paint his country. Every Aboriginal person I have met knows how he was chewed up and spat out by the colonial legal system. His art has stood as a message to successive generations that they too can be artists.

Nowhere is that legacy more evident than in Hubert Pareroultja’s Tjorita (West MacDonnell Ranges, NT), this year’s Wynne Prize winning painting. The Wynne Prize is awarded annually for “the best landscape painting of Australian scenery in oils or watercolours or for the best example of figure sculpture by Australian artists”.

This is a large work, exquisitely painted in a detailed style that cites Namatjira’s landscapes. But because of its detail, it also holds an otherworldly quality.

Pareroultja is a Western Aranda man, so those who know Namatjira’s country will find the subject matter to be familiar. It is no longer a surprise to find Aboriginal artists being awarded the Wynne Prize, but this is the first time a painting that belongs to the same visual tradition as well as the same cultural tradition as Namatjira has been so honoured. 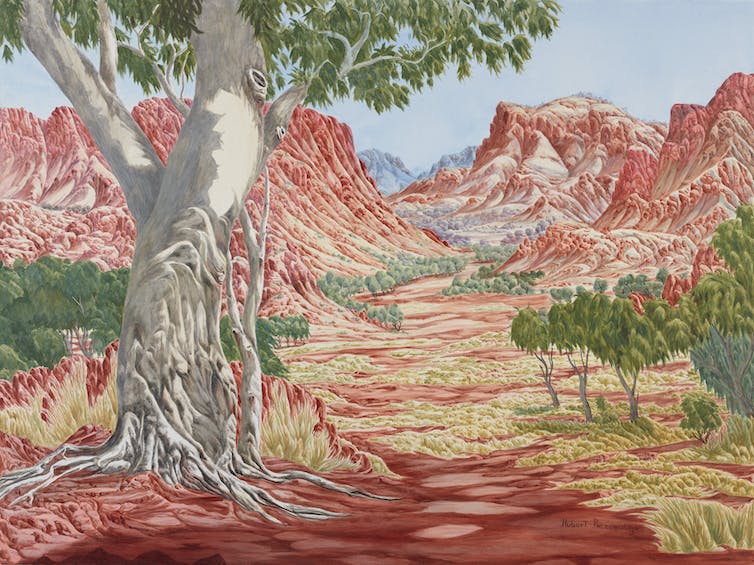 The Sulman Prize is judged by an artist, and is more adventurous than the Archibald and Wynne. Khadim Ali awarded this year’s prize to Marikit Santiago for The divine, a tribute to her three children.

They are painted as saints, gold haloes and all. She has consciously drawn on her heritage as a Filippina artist as well as the central place her children hold in her life. The work’s subjects even participated in creating its complex patterned background. 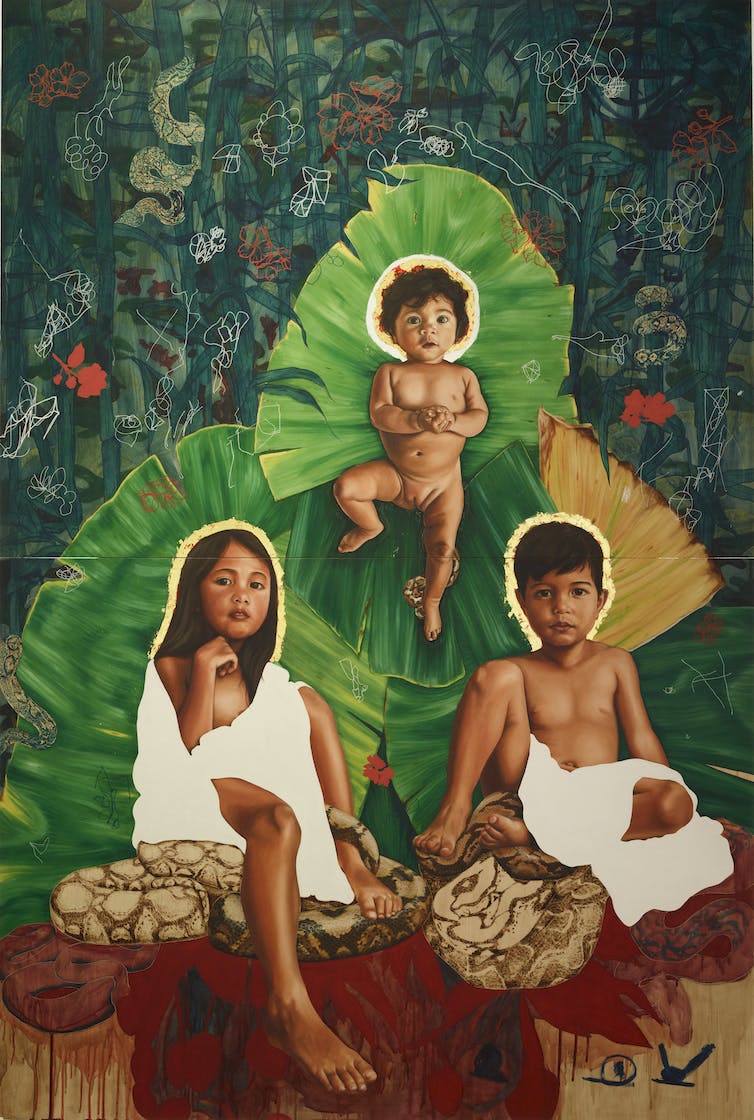 The Archibald and Wynne are judged on the morning of the announcements, but the Sulman is judged some time before. So Santiago was the only artist physically present when the chairman of the trustees, David Gonski, made his announcement. 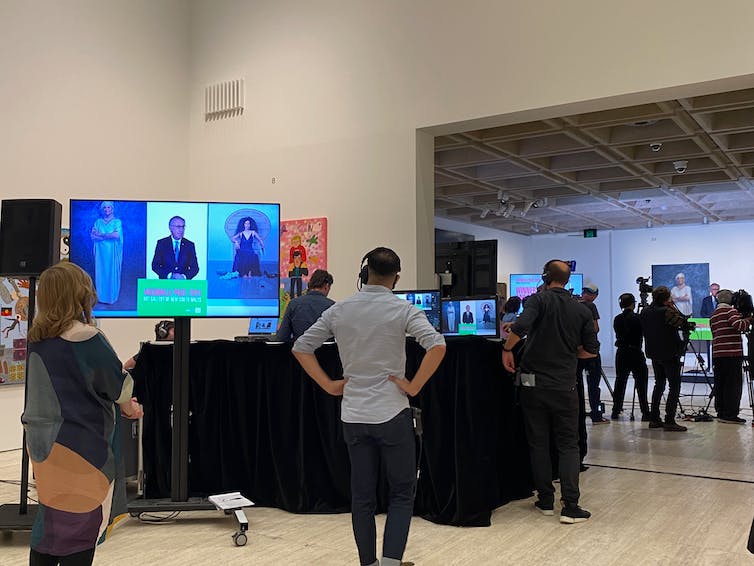 A different kind of announcement at AGNSW. Author, Author provided (No reuse)

Unlike previous years where the crush of journalists, artists, dealers and others associated with the event can induce claustrophobia, the gallery was dominated by television cameras and a crew at the bank of computers. The silence in the minutes before AGNSW Director Michael Brand introduced Gonski for the announcements was almost unnerving. The switch to the other winners, streamed live from their studios in the Northern Territory went without a hitch. It was an impressive production, this art prize in the time of COVID-19.

Correction: An earlier version of this story stated that Vincent Namatjira was the grandson of Albert Namatjira. He is his great-grandson.