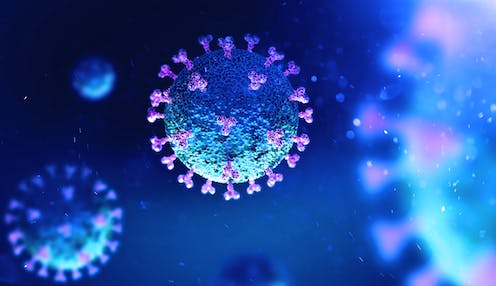 Vaccines are traditionally administered with a needle, but this isn’t the only way. For example, certain vaccines can be delivered orally, as a drop on the tongue, or via a jet-like device.

Vaccines that appear particularly suitable to needle-free technology are DNA-based ones, including a COVID-19 vaccine being developed in...

Vaccines are traditionally administered with a needle, but this isn’t the only way. For example, certain vaccines can be delivered orally, as a drop on the tongue, or via a jet-like device.

Vaccines that appear particularly suitable to needle-free technology are DNA-based ones, including a COVID-19 vaccine being developed in Australia.

Needle-free vaccines are attractive as they cause less pain and stress to people with needle phobias. But they have other benefits.

Read more: Fear of needles could be a hurdle to COVID-19 vaccination, but here are ways to overcome it

Jet injectors and beyond

The earliest needle-free injection systems date back to 1866 and used jet injectors. These hand-held devices used pressure to penetrate the skin and deliver medicine.

They became increasingly popular around the middle of the 20th century, and were used to deliver vaccines against typhus, polio and smallpox.

Jet injection has also been used in dental care to deliver local anaesthetic.

Read more: Australia's just signed up for a shot at 9 COVID-19 vaccines. Here's what to expect

Beyond jet injection, oral vaccines including rotavirus, cholera, polio and typhoid have been around for several decades, and are still used today in various parts of the world. They can come as a liquid or tablet.

More recently, researchers and biotechnology companies have developed vaccines you inhale, such as nasal sprays, as well as skin patches. These are mostly still in clinical testing. 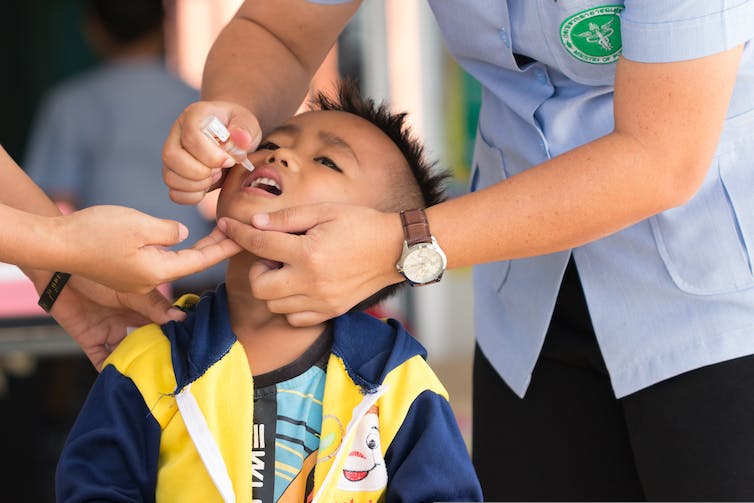 Oral vaccines have been around for many years. Shutterstock

DNA-based vaccines and the gene gun

DNA vaccines were a chance discovery as a result of early gene therapy experiments in the 1990s, where injecting DNA into the muscle unexpectedly generated an immune response.

With a DNA vaccine, a small section of the genetic material of the virus is delivered into cells under the skin. These cells then express the DNA as viral proteins. The body recognises these as foreign and stimulates an immune response.

DNA vaccines are simple and cheap to produce in large quantities, and they’re relatively safe as they don’t contain any infective agents, such as live virus.

Read more: From adenoviruses to RNA: the pros and cons of different COVID vaccine technologies

Scientists have explored a number of ways to deliver DNA vaccines, either with a needle or needle free. The needle-free methods include ultrasound (sound waves) and electroporation (electrical pulses) that disrupt cell membranes, allowing DNA into the cells.

The gene gun or “biojector 2000”, a form of jet injector, seems to be the most effective method. This uses pressure to inject DNA into deep layers of the skin. Because it improves the distribution of the vaccine deeper into the injection site, this method uses far less DNA than injection with a needle to generate the same immune response.

But no DNA vaccine has been licensed for use in humans yet. Although needle-free DNA vaccines have shown success in pre-clinical and early clinical trials, DNA vaccines in general are also not as effective in generating immune responses against diseases such as HIV and cancer.

Liquid jet injectors use small volumes of liquid forced through a tiny opening (smaller than a human hair). This ultra-fine high pressure stream penetrates the skin where cells then take up the vaccine and stimulate immune cells.

This method was effective in several clinical trials against HIV and is currently used to deliver some influenza vaccines. 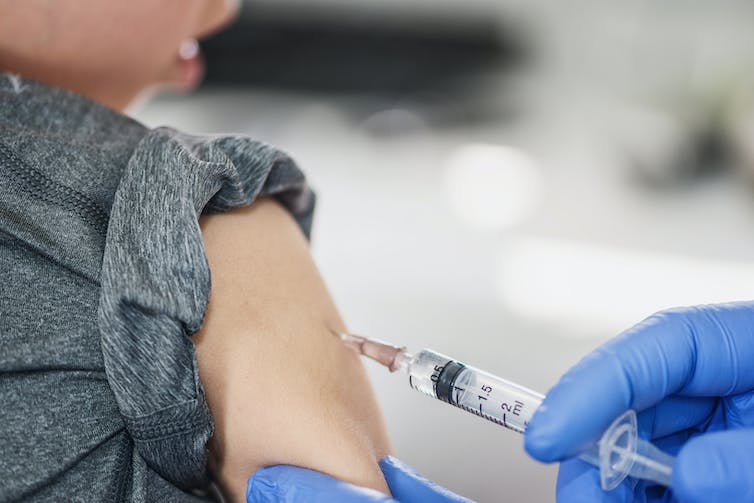 Needle-free vaccine technologies may be appealing to many people who dislike needles, including children. Shutterstock

Other needle-free COVID-19 vaccines in development include a bandaid-like patch made up of 400 tiny needles, a nasal vaccine, an oral vaccine as a tablet, and a needle-free device that delivers an mRNA vaccine.

Vaccines based on mRNA work in similar ways to DNA vaccines.

The advantages of needle-free vaccine technology, specifically jet injectors, include: