Thinking of Southeast Asia today may conjure up images of dense tropical rainforests teeming with iconic jungle animals such as orangutans, tigers and monkeys.

Perhaps less well known, but just as important to these ecosystems, are a host of other large-bodied creatures: the goat-like serows and gorals, three species of Asian rhino and the only species of tapir still living in the “Old World”. 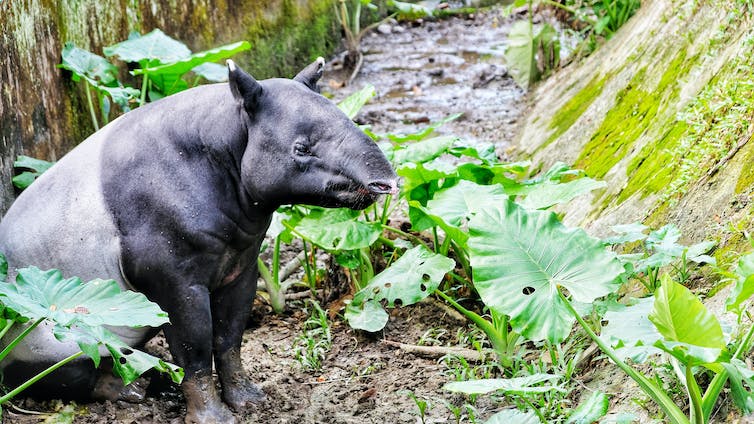 The endangered Malayan tapir is the largest of four widely-recognized tapir species and the only one native to Asia. Shutterstock

Together, these creatures comprise Southeast Asia’s megafauna, second only to Africa’s in diversity. These two continental ecosystems are the last vestiges of a world largely lost – one where giants roamed the Earth. But what caused so many megafauna species to go extinct?

Several theories have suggested either humans, climate change, or both drove Southeast Asia’s megafauna to extinction. However, our newest research published today in Nature indicates it was actually the rise and fall of savannah environments that drove this extinction event.

Southeast Asia has lost many large mammal species over the Quaternary period, the past 2.6 million years. They included the world’s largest ever ape, Gigantopithecus, elephant-like creatures known as stegodons and large water buffaloes.

These extinctions also include one of our closest relatives, Homo erectus, and two island offshoots of the human family tree – Homo floresiensis (the “Hobbit”) and Homo luzonensis. One final human species is also recorded in the genes of Southeast Asians today: the Denisovans, who were once likely widespread throughout the region.

According to previous research, the lead antagonist in the megafauna extinction story is humans. Some have suggested the arrival of people to new lands over the past 60,000 years or more – who then overhunted and altered this new habitat – is what led to the loss of giant mammals.

Others researchers have contended changes in climate resulted in the extinction of the megafauna. While others suggest a combination of both human and climate influences.

Toothy insights into past environments

For our research, we examined environmental changes in Southeast Asia over the past 2.6 million years, to determine how they may have impacted extinctions.

We analysed the stable isotopes of the teeth of mammals found in the region today, as well as those from available published fossil records.

Read more: Meet the giant wombat relative that scratched out a living in Australia 25 million years ago

Stable isotopes are the non-radioactive forms of many elements. Stable isotopes of carbon and oxygen preserved in mammal teeth record important information on what kinds of plants those animals ate, and how wet their environments were, respectively.

Stable carbon isotopes are particularly helpful in recording whether animals predominantly ate leaves and fruits in shaded forests, or grasses in more open settings. This insight lets us identify shifts in environments over time. 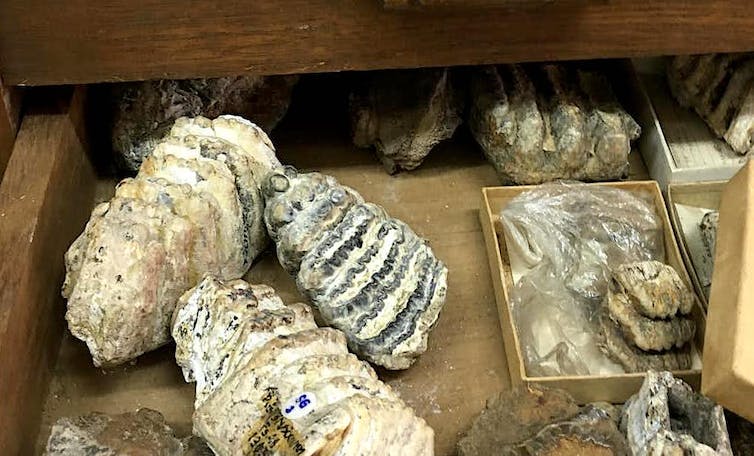 These fossil teeth from extinct Southeast Asian elephants are one example of the various teeth available in the fossil record. Julien Louys, Author provided

The fluctuating presence of forests

During the first 1.5 million years or so of the Pleistocene (the geological epoch that lasted from about 2,580,000 to 11,700 years ago), the northern parts of Southeast Asia were largely forest, while the southern parts were woodlands or grasslands.

Later, from about one million years ago, forests retreated everywhere in the region and grasslands dominated. Coincident with these changes, large forest-adapted animals including Gigantopithecus and a giant panda relative disappeared from Southeast Asia’s northern parts. 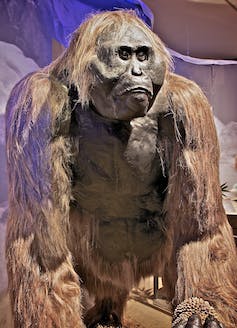 Gigantopithecus blacki was a large extinct ape that lived during the Pleistocene in what is now Southern China. It’s believed to have gone extinct about 300,000 years ago. Greg Williams/Flickr, CC BY-NC

Later still, around 400,000 years ago, the Southeast Asian Sunda Shelf began to submerge and climate cycles changed. Because of this, forest conditions returned.

At the same time, grassland-adapted creatures that had filled the region, including giant hyenas, stegodons, bovids and Homo erectus began to disappear – and largely went extinct by the end of the Pleistocene. The remainder were driven into the rainforests.

By the last few tens of thousands of years, we see the first evidence of stratified, closed-canopy rainforests in Southeast Asia. These have dominated the region for the past 20,000 years or so.

Rainforest-adapted species should have been advantaged by the return of the rainforests, but one interloper changed that. Homo sapiens appears to be the only species in our family tree that was able to successfully adapt to and exploit rainforest environments.

And although humans lived in Southeast Asian rainforests as early as 73,000 years ago, it was probably only in the last 10,000 years that Homo sapiens began to fundamentally alter these habitats and exploit the mammals within.

Southeast Asia continues to preserve some of the most critically endangered megafauna on the planet.

Megafauna grassland specialists were the greatest loss as a result of disappearing savannahs 400,000 years ago. Today, rainforest megafauna are also at great risk of extinction.

Luckily for us, our own species’ fortunes changed for the better with the emergence of typical Southeast Asian rainforests. But we’re now the very thing threatening to destroy them forever.