Many Melburnians have despaired in recent days as it became clear the next step on its roadmap out of lockdown will be taken a bit later than originally planned, or in smaller steps.

That’s because Victoria is unlikely to meet the threshold needed to clear a key hurdle in the roadmap: a 14-day state-wide average of less than five new daily cases (and less than five cases with an unknown source in the last 14 days).

Victorian Premier Daniel Andrews said on Monday the 14-day rolling average for metropolitan Melbourne was 9.9; for regional Victoria, the figure is 0.4.

The focus, for some time, has been on new daily case numbers. But what if we are looking at the wrong figure?

I’d argue that a useful alternative number we should focus more closely on is the average number of cases “under investigation” over the last 14 days. And on this measure, I think Melbourne is ready to move to step 3 in the roadmap out of lockdown, allowing Melburnians in general a greater degree of freedom, while still empowering authorities to ring-fence localised outbreaks.

Read more: 4 perspectives on how Victoria should exit stage 4 lockdown

Instead of looking at total new case count each day, we should take out the cases linked to a known source within the first 24 hours, because those people are already likely in isolation.

The focus should instead be on the cases still “under investigation”, which includes some that may turn out to be linked to a known source but also a smaller number of what authorities call “mystery cases” (where the source of infection is never identified).

The vast majority of cases now are linked to a known outbreak; this suggests a good understanding of the “shape” of the outbreak, and good control. The number of “under investigation” cases each day has been low. 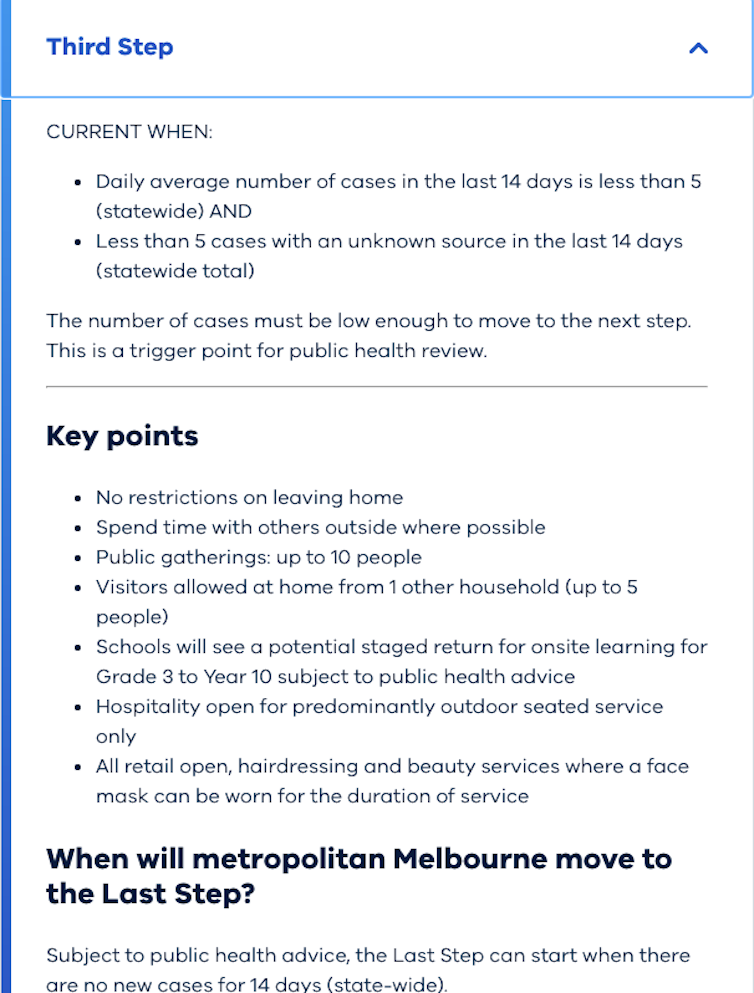 Step 3 of the roadmap out of lockdown for metropolitan Melbourne. Vic Gov

In fact, if you look only at the “under investigation” cases, it is already at about five a day on average, over the past 14 days.

I think it’s time to look at that number instead, as it is a useful measure of our capacity to contain and control spread. Many of the cases that do turn out to be linked may also already be in isolation, so it is still conservative, but the number highlights the cases where there is still some work to do. If the number of “under investigation” cases remains low, on average, we should be safe to move to step 3 of the plan to emerge from lockdown.

For metropolitan Melbourne, step 3 would mean no restrictions on leaving home, public gatherings of up to ten people, visitors allowed at home from one other household (up to a maximum of five people), and all hospitality and retail open (subject to some important rules).

If the 14 day average of daily new “under investigation” cases is about five, and we are keeping mystery cases under one a day, we should be ready move to step 3 in the roadmap.

If there are any remaining concerns about wider transmission, then I would suggest possibly delaying the introduction of visitors into the home for a week or two until these remaining outbreaks are brought under control.

We have demonstrated we can contain outbreaks. Clusters have been well managed in places like Kilmore and Colac that were not under the kind of tight restrictions Melburnians now live under.

The Victorian health system is at a point now where it has the resources to have a much more rapid and comprehensive response to individual cases and clusters than it did in the past. 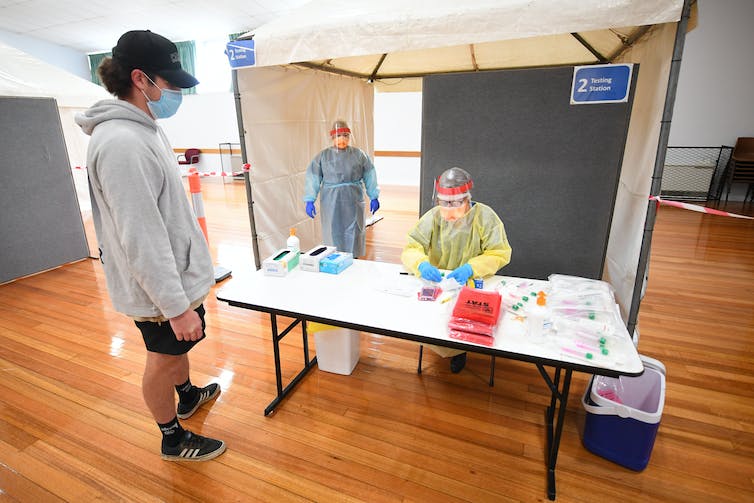 Victoria may have struggled earlier but we are now at a point where our response is world class. JAMES ROSS/AAP

That puts us in a strong position to actually move away from widespread restrictions for large swathes of the population as an integral part of our outbreak control.

We can now focus on a more concentrated response, to ring-fence cases and clusters rapidly and close them down — even when the broader population is allowed greater movement. The faster contacts of a positive case (and the contact’s own contacts) are isolated, the smaller the cluster is when it is contained as people are more likely to be in isolation before they are infectious. It is then less important how extensively people in other parts of the city or state are moving around.

The goal of reaching a 14-day state-wide average of less than five new daily cases is a noble one but it is conservative.

Victoria may have struggled earlier but we are now at a point where our response tactics are world class. We should be more comfortable relying on this responsiveness now built into the system.

The virus is really now focused within essential workers in certain workplaces and and in their families. It is not as though it is spread evenly and widely across the Melbourne citizenry.

We also have moved to a focus on virus surveillance in workplaces (where we know the risk is higher) to monitor virus levels within the community, and other early warning systems that allow us to move away from blanket approaches applied to the whole Melbourne population in both outbreak detection and response.

Read more: Can a High Court challenge of Melbourne's lockdown succeed? Here's what the Constitution says