Women leading both of New Zealand’s largest political parties is something to celebrate. Watching Jacinda Ardern and Judith Collins go head to head in three televised or online pre-election debates should surely dispel any doubt about whether women are up to the demands of leadership at the highest level.

As tonight’s final debate will also surely demonstrate, both women are confident, assertive and resilient under pressure, attributes widely expected of leaders. And yet gender bias continues to define aspects of their careers and performance.

While the format has offered limited in-depth policy discussion, the debates have been a far cry from the “gladiatorial masculinity” displayed by Donald Trump in the recent US presidential debate with Joe Biden.

Nonetheless, subtle but still influential gendered dynamics are at play in the New Zealand election campaign. Ardern and Collins navigate these dynamics in quite distinctive ways, which may help explain why they each evoke such different emotions in voters. But how do people form these opinions?

Even without formal study, everyone develops their own ideas about what good leadership involves. Researchers call these ideas “implicit leadership theories”, and they shape how leaders are perceived.

While these personal theories might not be correct — in the sense that someone might value leader behaviours that research shows are actually ineffective or harmful — they are nonetheless influential. 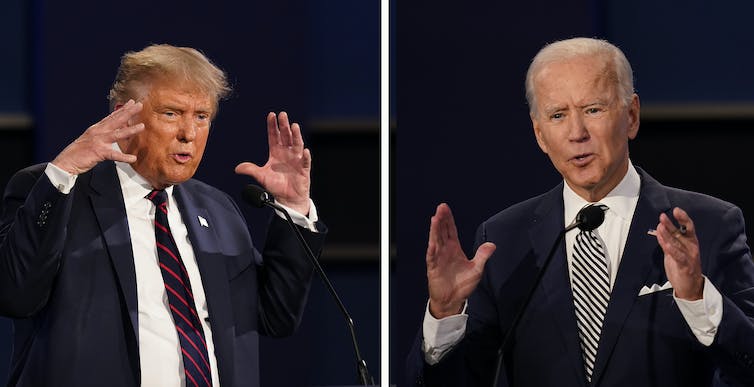 What makes an effective leader?

Research on these implicit theories shows that behaviours traditionally associated with masculinity are more likely to be seen as leader-like: this means when some people think “leader” their default is also to think “male”.

This results in people expecting leaders to be “strong” in the sense of being “tough” and “commanding”, attributes associated with traditional expectations of men. Similarly, being intimidating, power-hungry, risk-taking, demanding and domineering are often qualities people link to leadership.

However, a significant body of research suggests these behaviours are not, in fact, the key qualities that make for effective leaders. Rather, they tend to undermine innovation, inhibit quality decision making and fail to draw out the best from people. Instead, humility, collaboration, team building and inspiring people to work for a common good are more important. These are also qualities women often exhibit.

But because they are judged against an implicitly masculine norm, women continue to find it harder to attain leadership roles, and to then succeed in those roles.

Playing to others’ expectations

Given all this, it is not surprising that Judith Collins often adopts an overtly combative, masculine style to appeal principally to a more traditionally-minded voter base.

There are clear echoes of the former British prime minister Margaret Thatcher — the so-called Iron Lady — in Collins’s approach. She presents herself as a potential prime minister who would be tough, in command, in control, brooking neither dissent nor failure.

The reality of gendered leadership expectations means that to do otherwise would risk Collins not being seen as leader-like by those whose implicit leadership theories favour such traditionally masculine notions.

But this is not a guaranteed winning strategy by any means. As British leadership scholar Keith Grint argues, it’s generally unwise for leaders to proclaim complex problems can be solved by way of simple solutions. 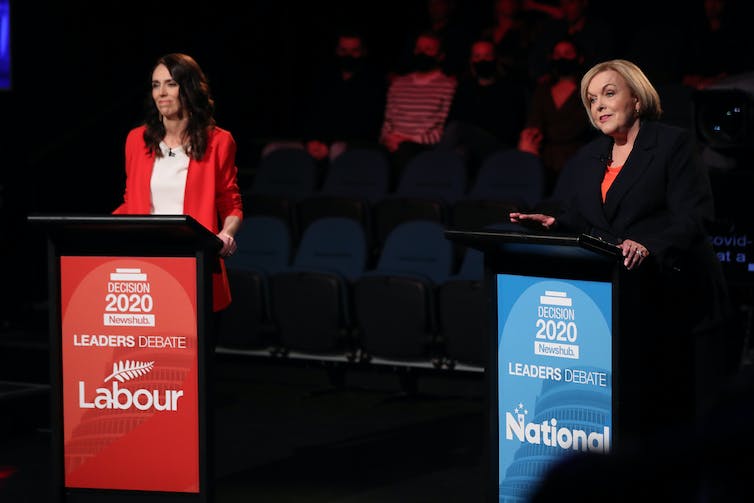 Gendered perceptions: Jacinda Ardern and Judith Collins during the second TV leaders’ debate, the day after the US presidential debate. AAP

The more Collins plays to traditional expectations of a combative, masculine style of leadership, therefore, the more she risks alienating people — including within her own voter base.

Ardern is equally at risk of the double bind but in the opposite way. Her emphasis on being kind and showing concern for others means she is seen by some as a nice woman but not an effective leader.

There is evidence to suggest that these so-called “soft skills” are, in fact, key to effective leadership. So, while Ardern’s style risks lacking credibility with those who cleave to more traditional, masculine views of leadership, this does not mean she is an ineffective leader.

In a political contest between two very determined, confident and resilient women, it should be remembered that some voters will inevitably be influenced by gendered preconceptions of what makes a good leader — and that this is just one more challenge such female leaders face.