Following in the footsteps of Samsung, Apple has released its first high-spectrum 5G smartphone, the iPhone 12. But only US customers will benefit.

High-spectrum 5G uses millimetre-wave frequencies in the 26GHz range (25.1GHz to 27.5GHz). But Australia’s mobile phone networks, although they can access the mid-range 5G spectrum, don’t have access to these high frequencies.

Unlike the US version, the iPhone 12 model for Australia lacks the distinct millimetre-wave antenna necessary to access them. In other words, Australians who purchase an iPhone 12 wouldn’t be able to access high-spectrum 5G even if it was available here.

This is another stark reminder of the effort needed to enable Australia’s “fourth industrial revolution”. Not having high-spectrum 5G available for the public and businesses right now is a letdown and will set the country back as it struggles to recover from a recession.

How did we fall so far behind?

Millimetre waves are what will help US iPhone 12 users reach speeds of up to 4Gbps (gigabits per second). The extra bandwidth will be especially useful in public spaces that require higher data capacity throughput, such as shopping centres and sport stadiums.

In the US, Samsung’s Galaxy S20+ and Galaxy S20 Ultra, launched in March, both support millimetre-wave frequencies. But telcos AT&T, Verizon and T-Mobile had rolled out the network even before the millimetre wave 5G-capable smartphones were released. Meanwhile, individual customers and businesses in Australia are still limited to 5G in the sub‑6 GHz range.

The higher-frequency 5G technology is currently only available in the US, but has also been assigned in Italy and Finland. Several other countries are planning to upgrade soon, including Singapore, Japan, Taiwan and South Korea. Local licenses are also available in the UK.

On the other hand, the Australian government is planning to auction off the use of the 26GHz frequencies in March next year, for the first time ever.

This leaves us trailing behind. The longer the delays in bringing the millimetre wave spectrum to Australia, the longer we’ll have to wait before benefiting from it.

Sold to the highest bidder

Following next year’s scheduled auction, Australians may not be able to experience any 5G millimetre wave connectivity until late 2021, or even early 2022.

The result will depend on the best business cases put forth by mobile companies during the auction, as well as how they allocate the bandwidth between individuals and business customers. The spectrum will likely be prioritised for industrial use first, before it’s rolled out to residential customers.

That said, if businesses such as manufacturers, sports stadiums, shopping malls, offices and high-rise residential buildings benefit, then individual customers are likely to benefit as well. This is because costs would likely drop and prices would follow.

This was the strategy followed in the US and which Optus has indicated it’s also likely to follow.

What speed tests in Australia reveal

During isolated tests in Australia, non-millimetre wave 5G speeds were recorded to be at least 3.9 to 4.6 times faster than 4G, for Optus and Telstra. But this is still slower than the 1Gbps speeds usually associated with 5G.

According to a Telstra report from last month, millimetre-wave tests conducted by the company promised speeds of 4.2Gbps. While this was for a data call, as opposed to wifi access, these results are positive and on par with what Apple is promising for new iPhone 12 users in the US (but not yet the UK).

Telstra claims it already has live mobile sites that can support millimetre-wave frequencies on its network, ready for deployment. It says it has spent the past 18 months laying the foundations for a millimetre-wave 5G network to come into use once the frequencies become available. 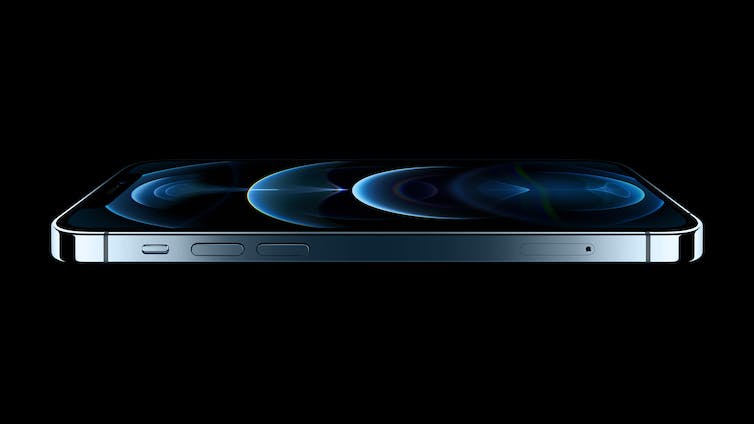 Apple’s iPhone 12 allows super-fast 5G capability, but so far only in the US. Apple

We’re letting ourselves down

In today’s age, compounded by a global pandemic and severe economic downturns the world over, it matters whether or not a nation has millimetre-wave 5G.

This technology has been available in the US since 2019 and its adoption is separating the world’s trailblazers from those trailing behind.

Millimetre-wave frequencies are important for advanced manufacturing processes, self-driving vehicles, factory automation and reliable communications across hospitals and the (now heavily remotely-operated) educational sector. These are just some areas in which high data capacity is a necessity.

Once millimetre wave-enabled industrial applications are rolled out, we should see customers in high-density public places prioritised for such services, before this trickles down to individuals at home. A focus on boosting business will likely underpin this sequence.

Australia wants to upscale its emerging technologies, research and manufacturing capacity, with a focus on the COVID-19 bounce back. But to do this, we’ll need an even speedier resolution than under normal circumstances.

Read more: What is 5G? The next generation of wireless, explained