After days of speculation, today’s announcement by Victorian Premier Daniel Andrews was pretty much as we expected: a significant lifting of restrictions, albeit only a half-step out of lockdown.

From 11.59pm tonight, Melburnians will be able to travel up to 25km from home, with no time limits on exercise or recreation, bringing the chance to play a round of golf or visit the hairdresser.

Even more encouragingly, we may only have to wait a week until the lockdown is lifted, the “four reasons” to leave home are removed, and retailers and other businesses can once again open their doors.

Andrews said the planned move to step three of the COVID-19 roadmap could be brought forward a week from its provisional date of November 1 if case numbers — now tracking at 7.5 new cases a day for metropolitan Melbourne and just 0.5 in the regions — remain favourable.

“Victorians have stayed the course, and we just have a little longer to go,” he said.

I agree Victorians can rightly be proud, because this lockdown was a very big ask. In fact, I see no reason why we can’t remove blanket rules such as the 25km radius and Melbourne’s “ring of steel” immediately.

The blanket restrictions in Melbourne, which have been in place since early July, have bought time to rebuild our public health response, with stronger measures for testing, contact tracing and isolating outbreaks. The idea is to “bring the restrictions to the virus”, meaning we can now contain it wherever it might appear.

As a result, restricting the general public’s movements with the help of blanket rules makes less sense, because many Melburnians now have a minuscule risk.

Read more: A 14-day rolling average of 5 new daily cases is the wrong trigger for easing Melbourne lockdown. Let's look at 'under investigation' cases instead

I don’t understand why we need to impose a 25km limit. It’s such a big radius but will still exclude people who live at opposite ends of the city from seeing each other. Perhaps the fear is too many people will congregate in popular or scenic places. But surely that can be managed by scrutinising those particular places.

In contrast, when Singapore was coming off its second wave, it lifted restrictions when COVID-19 cases were at 60 per million people, per day. Melbourne’s current average is just over 1 case per million people, per day. If Andrews were to promote Victoria’s strategy to the rest of the world, I’ve no doubt they would agree it’s been a success, but they would probably also wonder why it is taking so long.

We had an extended blanket lockdown that was enough to quash the virus multiple times over in households. But we weren’t able to contain it in aged care, certain workplaces, and complex households.

With cases now so low, the idea that all public movement equals viral spread is not true. There’s a lot more to this virus than this sort of reductionist approach. We know probably 70% of people don’t even pass it on, and that many cases are the end of a chain of infection. If we do get a cluster, we will likely pick it up. This gives me confidence Melbourne will be able to open up fully next weekend. 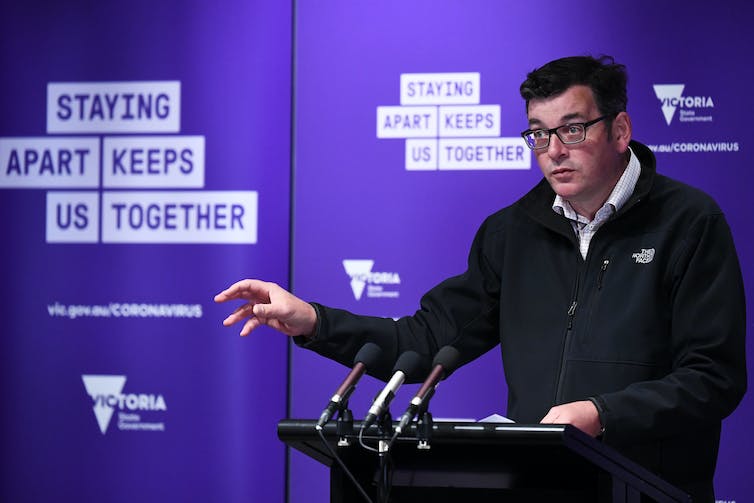 Premier Daniel Andrews has told Victorians they may be able to move to step 3 of the COVID-19 roadmap within a week. James Ross/AAP Image

The wholesale rebuilding of our contact-tracing means we are now very much on the front foot. Health authorities should continue urgently interrogating and isolating new cases, particularly mystery ones.

But for the wider public, it is now important to instil a sense that the government trusts people to be sensible for themselves. The more rules we have, the harder it is for people to have a sense of agency.

The rules should now be focused on areas where there is greatest risk. Unnecessary blanket rules might get in the way of people buying in. For instance, the ring of steel shouldn’t be necessary, given the testing and tracing measures we now have in place. What’s more, I think it will be a long time before people go back to their old patterns of movement, given that people have become acclimatised to staying at home.

This also means it’s easier to consider lifting border restrictions. While we’ve been busy fighting off the second wave we’ve built the health response to a point where we can live with the virus. So things like borders become less crucial.

Read more: WHO is right: lockdowns should be short and sharp. Here are 4 other essential COVID-19 strategies

If authorities aren’t busy policing things that don’t make much of a difference, such as the 25km rule, it will free up resources and also mean people have one less rule, and one less fine, hanging over them.

I would also urge authorities to allow people to wear masks only in situations where it makes a real difference, as opposed to everywhere. It’s easier to trust the public to do that when they’re not being told to wear them all the time.

Over more than three months, Victorians have grown used to being told what to do in intense detail. Now it’s time for people to get back some control, and I’m hopeful we can do that in a way that’s safe.