Aspirin is one of the most widely used drugs in the world. Its main ingredient comes from a natural product, salicin, found in plants such as willow and myrtle.

Aspirin is also a good example of how myths build up around ancient medicines.

Its origins have been closely linked with Hippocrates, the famous ancient Greek doctor and so-called father of medicine. He’s said to have used willow for pain relief, inspiring the development of aspirin centuries later.

But his writings barely mention willow. So why do we still believe the myth?

What’s all this about willow?

But when we look at what Hippocrates actually wrote, there is just one reference to burning willow leaves to make smoke for “fumigating” the uterus to get rid of a miscarried pregnancy.

This is pretty much the only reference to willow — ιτεα or itea — as a drug in these writings.

Read more: Hippocrates didn’t write the oath, so why is he the father of medicine?

Willow bark and leaves were used in some ancient medicines. However, these were often used externally, rather than swallowed. Because ancient weights and measures are confusing — and sometimes missing altogether in recipes — it’s hard to tell whether there was enough salicin in an ancient recipe to make a difference.

The bark of white willow (Salix alba), which Hippocrates may have been talking about, doesn’t contain much salicin, compared with other willows and salicin-rich plants like the myrtle tree. 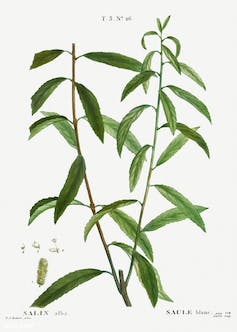 A clinically effective dose of 60–120mg of salicin would be very hard to obtain from simply chewing white willow bark or drinking willow tea.

White willow also contains toxic, bitter-tasting tannins. These would make it hard to consume enough bark or tea to reach that dose, and would cause stomach pain long before you got there.

Natural salicin is more abundant in other ancient plants, such as the myrtle tree. But even then you would still probably give yourself a terrible stomach ache after ingesting enough of the plant to relieve pain.

Dioscorides was an ancient Roman who wrote a guidebook of medicines, still in print today. He described willow as a remedy for stomach ache, the respiratory disease tuberculosis, and as a contraceptive.

He said if you burned willow bark, soaked it in vinegar, then rubbed it on corns and calluses, it would remove them. He also recommended a hot pack containing willow leaves for gout (which we know now as a type of arthritis).

Celsus, another Roman medical writer, said warm willow packs or poultices would treat a prolapse of the womb or bowel (where the organ literally falls out of the body). Celsus advised to push it back in, and then bandage the warm dressing on the outside.

Salicin is used today to treat corns and warts. But this doesn’t mean Dioscorides’ recipe worked because of the salicin. Vinegar is acidic and is said to soften corns on its own. Applying any kind of warm pack will also relieve pain.

If willow bark and leaves were handy and potent painkillers, we would have used them almost to extinction by now. Instead, by early modern times in Europe, willow was considered largely useless as a medicine.

This doesn’t mean willow was actually useless. It still contained salicin, but this hadn’t yet been isolated or refined into its modern form.

Read more: Leaders as healers: Ancient Greek ideas on the health of the body politic

So, if it wasn’t Hippocrates, who was it?

It was English cleric Reverend Edward Stone who “rediscovered” willow.

In around 1757, Stone chewed on white willow bark out of curiosity and was struck by how bitter it was. He wondered whether it could be used medicinally, like the bitter cinchona bark (where the malaria drug quinine comes from).

Stone gathered and dried around half a kilogram of willow bark, then ground it to powder, before taking small doses every four hours to reduce his fever. Drying the bark would have concentrated the salicin, making its effect stronger.

When the powder seemed to relieve his fever, Stone tried it on his parishioners when they were sick. In 1763, he wrote to the Royal Society, reporting it worked.

How did a plant extract turn into aspirin?

Italian researchers Brugnatelli and Fontana managed to extract salicin from willow bark in 1826. Then German pharmacologist Johann Andreas Buchner created the name “salicin” in 1828 from the Latin word for willow, salix.

Felix Hoffmann, a researcher at the German company now known as Bayer, chemically modified the related molecule salicylic acid, which was eventually named aspirin. The company patented the name in 1899. 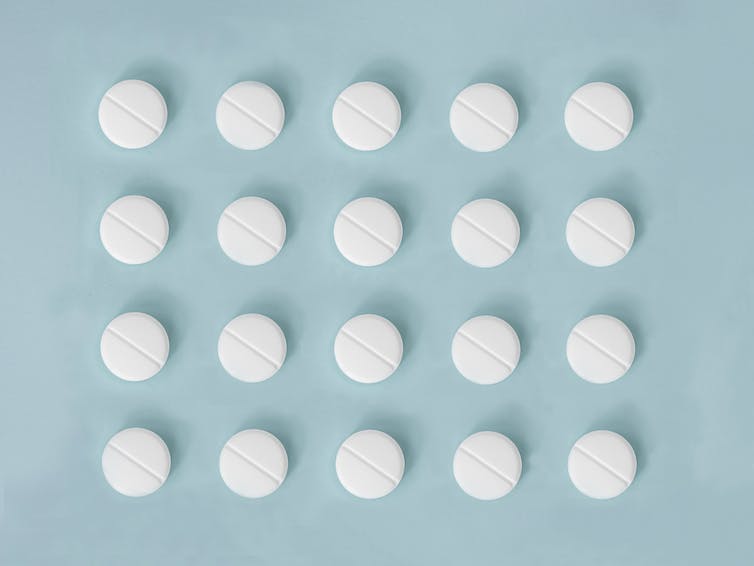 Aspirin is one of the most widely used medicines today. Daniel Foster/flickr, CC BY-NC-SA

Why do we keep repeating the willow myth?

Researchers keep repeating the myth that ancient people understood the link between willow and salicin for pain relief, partly because everyone loves an epic tale. And the story of aspirin can be turned into one, with a bit of imagination. But it’s a good reminder to look at original texts if you can.

It’s also an example of how confirmation bias works. We know salicin is in willow, and salicin relieves pain. So when we find ancient references to willow, we think ancient people discovered salicin before us.

Modern medicine likes a respectable family tree. It helps give today’s manufactured products a good pedigree. It also helps us think of these products as safe, beneficial and part of a long healing tradition.

But the “ancient” history of aspirin has a lot of holes in it. So next time you pop an aspirin, thank Hoffmann rather than Hippocrates.